Spanish vs. Americans at 60 Points

After the Garante fleet won a game against the Pirates earlier this year, I wanted to see if I could better utilize her with the Native Canoes to enhance her ability.

I also used Woelf’s house rules for treasure, using 16 random treasures for the four islands and including 3 completely random UT’s as well. 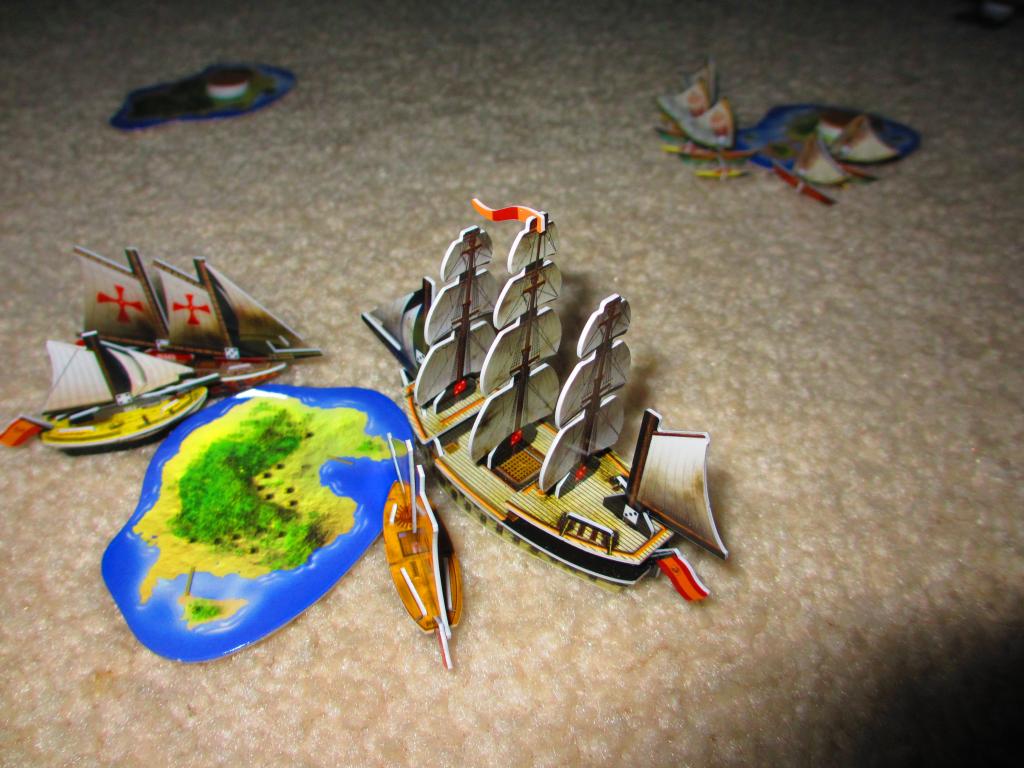 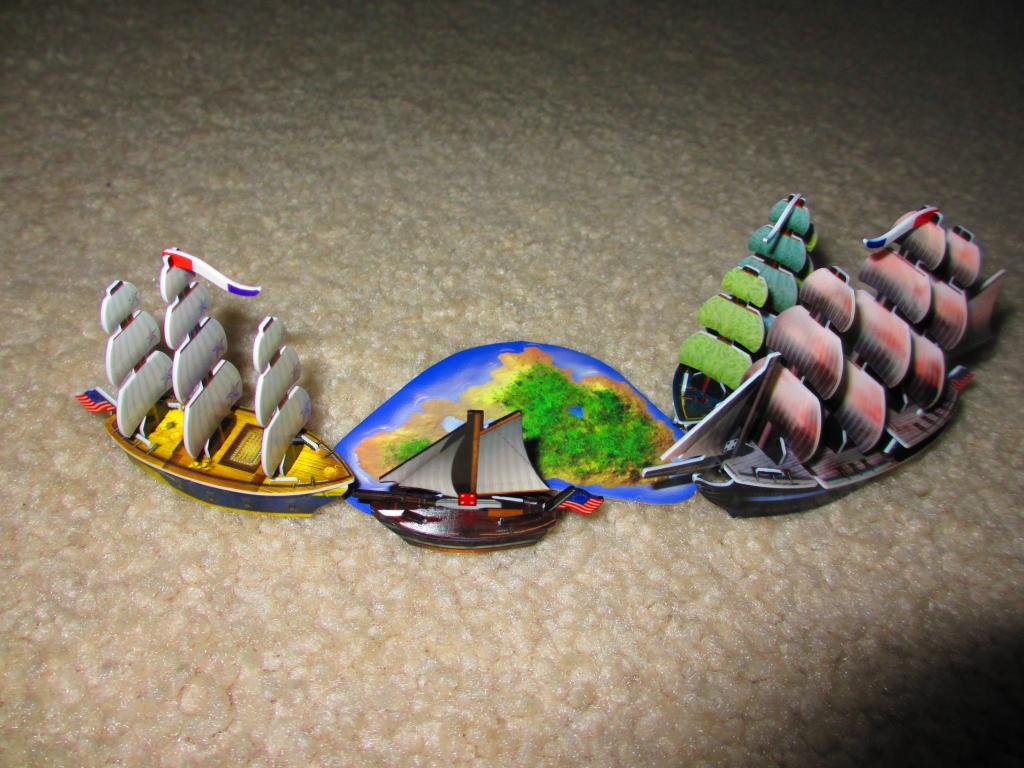 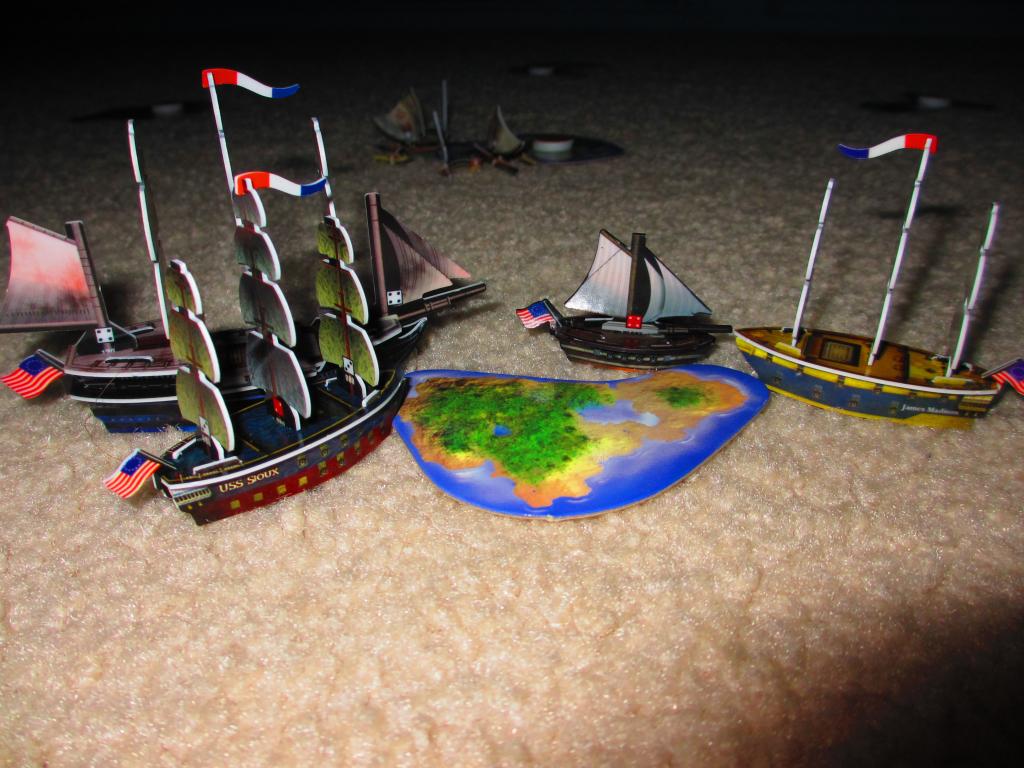 The Spanish were the first player. With the islands only 2L apart and the home islands close together it would be interesting to see how the Garante and her canoes went about their maneuvering. The Hambre was able to get to the nearest island while all of the other Spanish ships formed a cluster with the Monarca and Anunciada on the port side of the Garante. 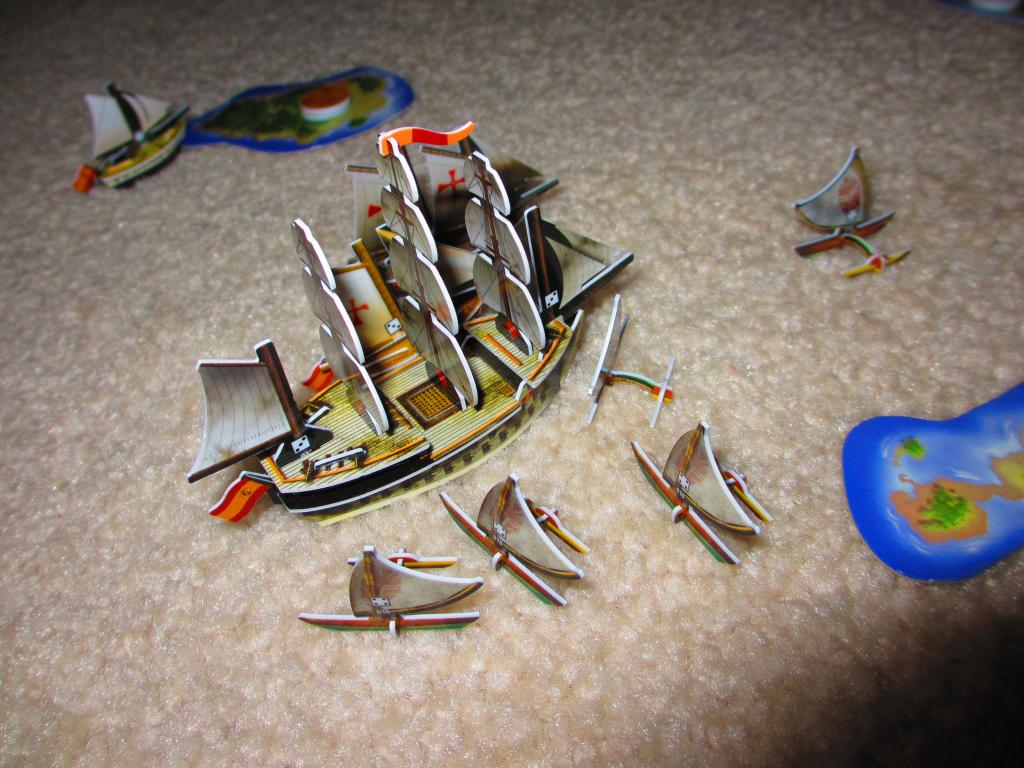 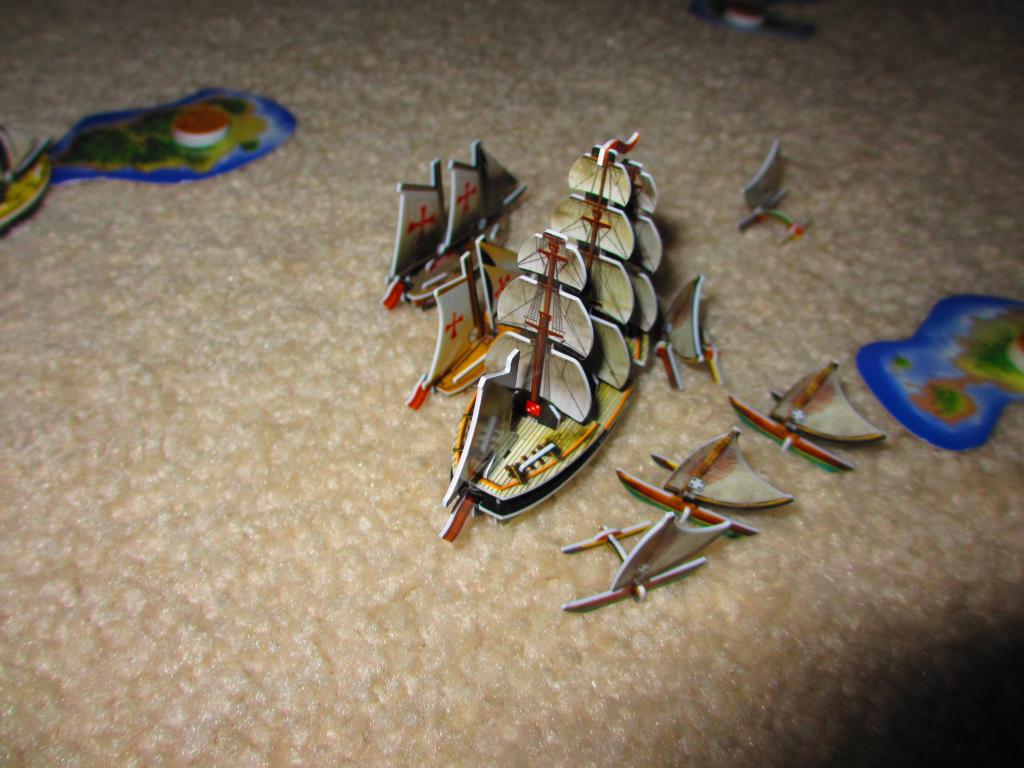 Hidden Cove was flipped, docking the Sioux at the northern side of the middle wild island where the canoes had started the game. She sailed northwest to block all three Spanish ships and fired a powerful broadside, dismasting the Monarca and taking out a mast on the Anunciada! Hidden Cove had been used once again to give a fleet a decided advantage.

The Roanoke sailed north and sank one of the native canoes, missing with her other guns. Then Blackheart sacced the American oarsman and raked the Garante by the stern, shooting away two more masts. After the impressive Spanish fleet had set sail, the game was almost over before it had even started! 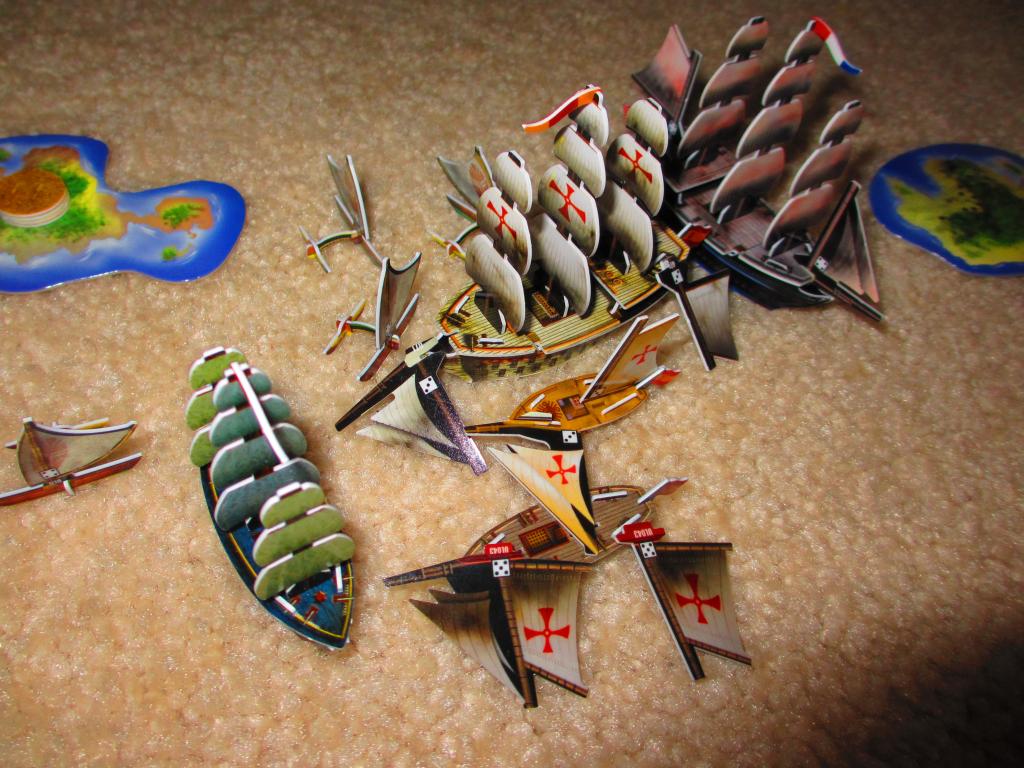 Although the Spanish were in bad shape and surrounded by the two American gunships, they fought back admirably on the next turn. The Anunciada set the Sioux on fire with her equipment. Then the native canoes took a shoot action, hitting once in three tries to reduce the Sioux to one mast. Finally the Garante moved and used the nearby canoes to hit the Sioux twice more to sink her! In the meantime the Hambre explored her wild island, finding a 7 and a 2 and no UT’s. 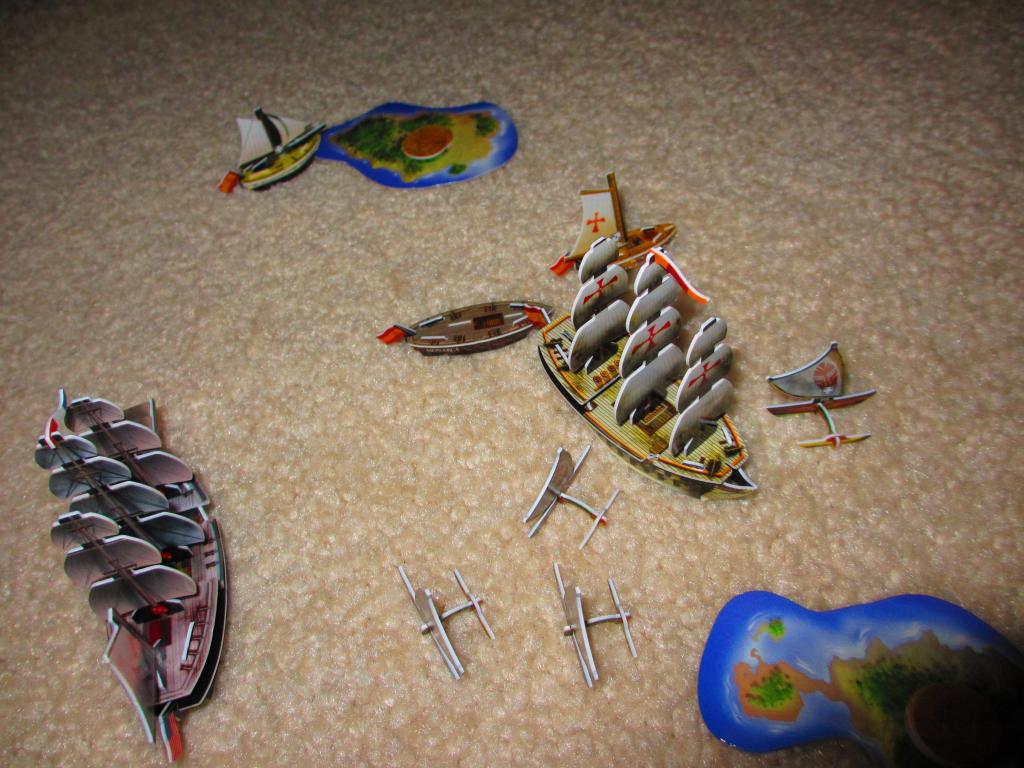 The Roanoke moved quickly to retaliate. Her first action sunk the Hambre, upon which the Americans used Divers to recover all of the sunken gold, giving them 9 gold on their HI. The Roanoke sacced her explorer to move and shoot a second time, dismasting the Anunciada and taking out two more masts on the Garante, leaving the Spanish with one mast on the Garante and four native canoes. The Lynx and James Madison were at islands getting gold. 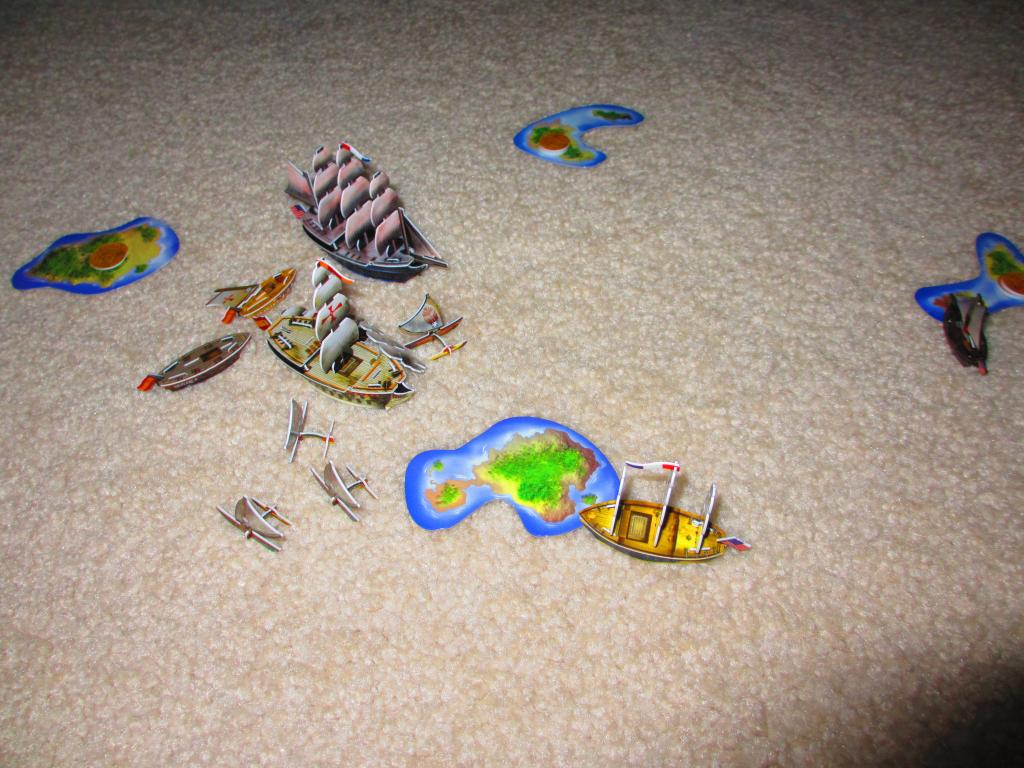 At this point it was far too late for the Spanish. The Garante managed to take a mast off the James Madison and moved the Lynx and her island via Bad Maps, but the Americans ended the game soon thereafter with the Roanoke. 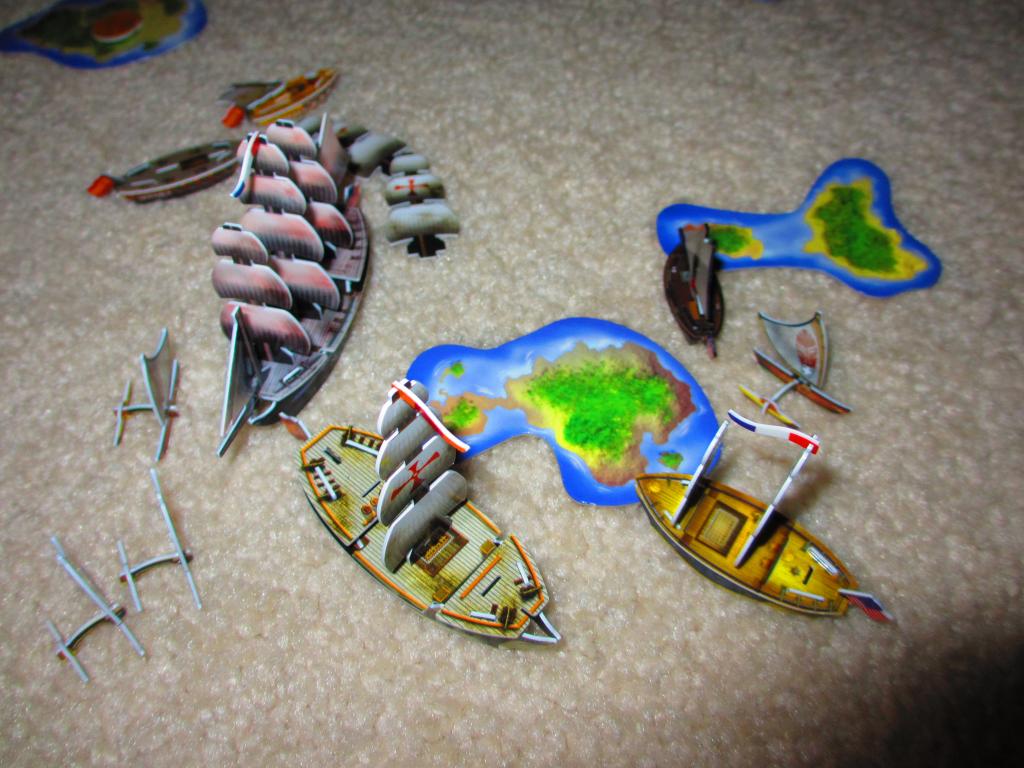 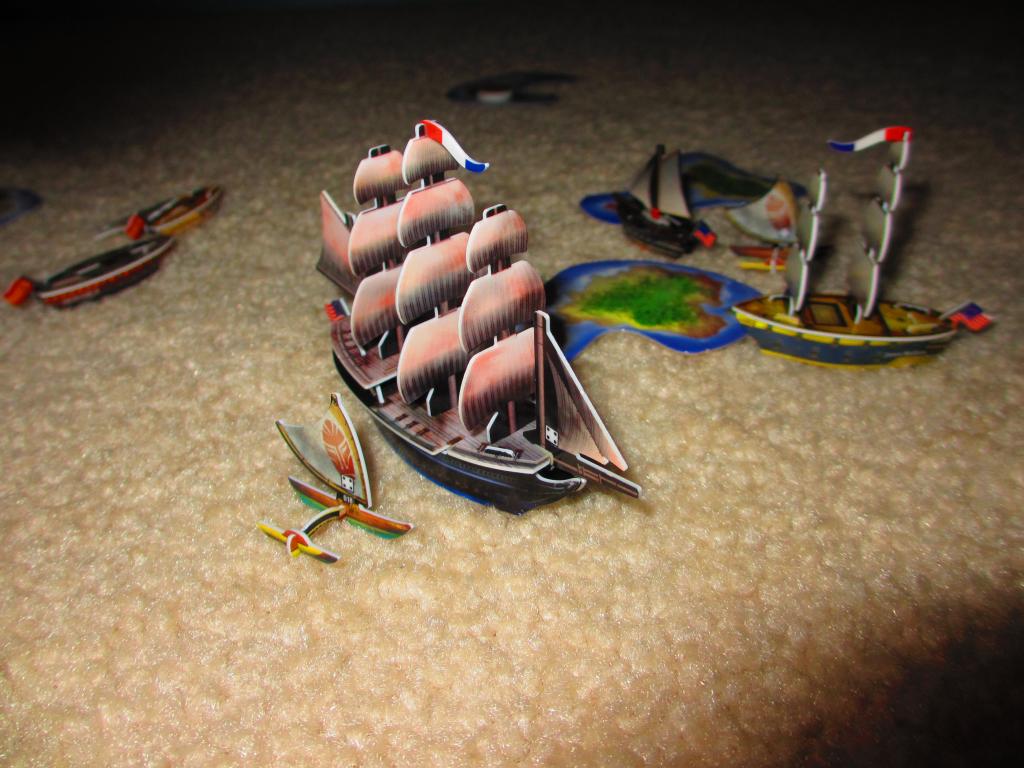 In the end the final score was technically 9-0 in favour of the Americans, however there was actually another 18 gold on the James Madison and Lynx coming home. The combination of Hidden Cove, Captain Blackheart, and some well-timed Divers made for a quick blowout American victory.