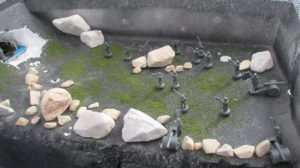 A different kind of land combat in Command the Oceans

This is just my latest gimmick fleet, at a level so impractical you probably have no reason to look at it. However, if you want to see a thought exercise in how to make Pirates a land-based game, read on. XD

As of this writing I still don’t have any Great Turtles, but they are islands that can MOVE. This is truly incredible, and opens up strategic possibilities that have not gotten as much attention as I would have thought (easier HI raiding, messing with enemy trade routes, etc). In this fleet, the purpose is to move at least one Great Turtle into position so a fort’s cannons can hit an enemy fort or marine.

Unfortunately, we cannot build a fort and then make it mobile. However, there are other things to be done in the way of optimizing this “strategy”.

This whole idea of land combat is quite silly and even stupid if you really think about it. The goal is just to have land combat, not even to win the game. It’s also dependent on your opponent using at least one fort or marine, preferably a fort. If you ever actually use this fleet, try to convince your opponent that it’s “International Build a Fort Day”. XD

Bad Maps is key here. I have included Pandora’s Box so another copy of Bad Maps can be introduced to the game. Hopefully your opponent will find the Box, so you can choose where the second island is sent. Try to have the islands close together, but possibly with one just outside L range of the other. Also keep in mind that the Great Turtles cannot be moved once a fort is built on them. Therefore, use actions to get the turtle into position, and then dock a ship at the turtle later in the turn so you can build a fort on it before your opponent can move it out of position.

Since moving the Great Turtles requires move actions, a swarm fleet would be best for the actual ship choices. The Swiftsure carries a Marine, in case we can have Marine vs. Marine combat on two separate islands, or even Marine vs. Fort. XD The Swiftsure also brings into play Ramsgate, my favorite fort and one that is essential to this concept. Build Ramsgate on the island that is more than L but less than 2L away from a different wild island that has an enemy fort on it. Then, use the fort’s L+L range cannon to blast away at their fort, which doesn’t have the range to reach Ramsgate! XD

This fleet has the cargo and speed to actually get some gold, but the quantity of ships should help you get islands into the right position for land combat to occur. The Algeciras and Treachery are simply escorts so the fleet isn’t blown out of the water as easily. The Jolly Mon is PERFECT for this fleet and the Great Turtles in general, since the ship won’t be moving away from the HI anyway, and allows for 4 extra points via the Hag. The Coeur was included so Paradis could be added – imagine a Spanish player building El Puerto Blanco , and then they get Pandora’s Box and you use Bad Maps to move an island next to the fort, and then build Paradis to wreck it! XD Or, once your opponent has built their own Paradis, build Fortaleza Dorada next to it, which is immune to the L-range guns!

Maps of Alexandria will help to show which islands are worth hitting for the other UT’s. The Figurehead was added since this fleet has many fragile ships and the two gunships aren’t likely to sink any enemy ships, so it’s almost all upside. Necklace of the Sky is an underrated UT that could be key in certain odd situations with this fleet. It could be flipped after your opponent moves an island via Bad Maps or one of the Turtles, in case you needed to build a fort on an island real quick or to prevent an ugly situation.

What ideas do you have for land combat in Pirates CSG?