I didn’t mention it in the original battle report, but this game was my first-ever playing against a real opponent in a non-solo game.  My first player taught!  It was a pair of introductory games at college.

Two games were played, both 40 point games. The fleets for the first game were as follows:

The home islands were close together, with each fleet eager to start the action. The Annapolis was the first ship to explore, but she was quickly set upon by the Virtuous Wind and captured by the Cazadora. The rest of the American fleet headed east. 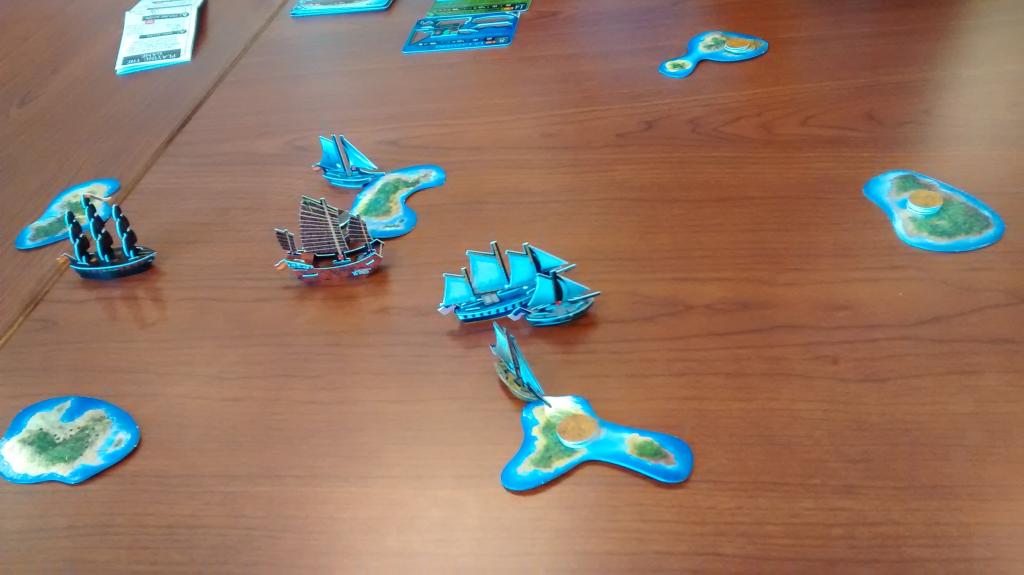 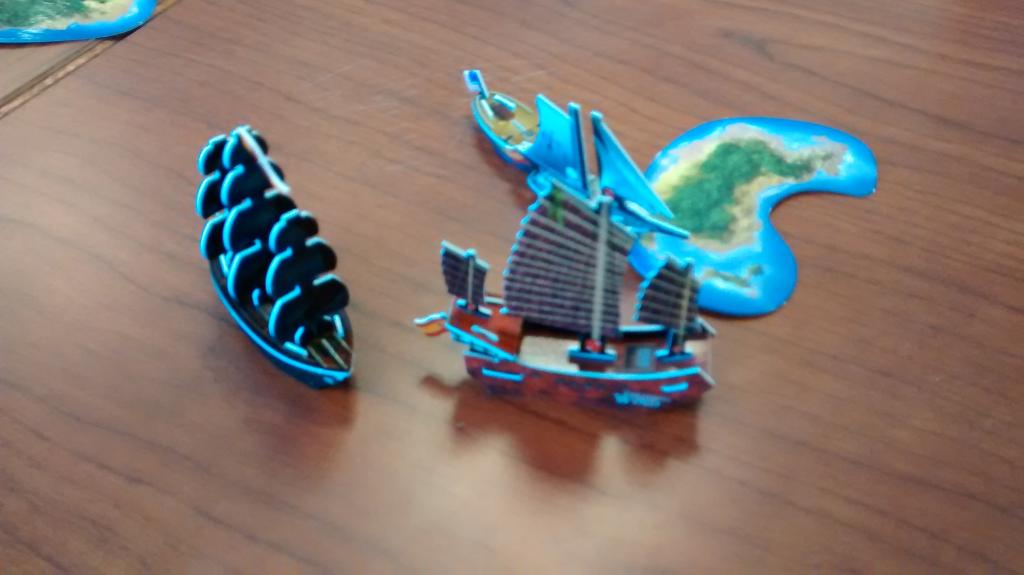 The guns of the legendary Virtuous Wind (even the slower Spanish version!) made their mark on the next turn by sinking the Philadelphia. 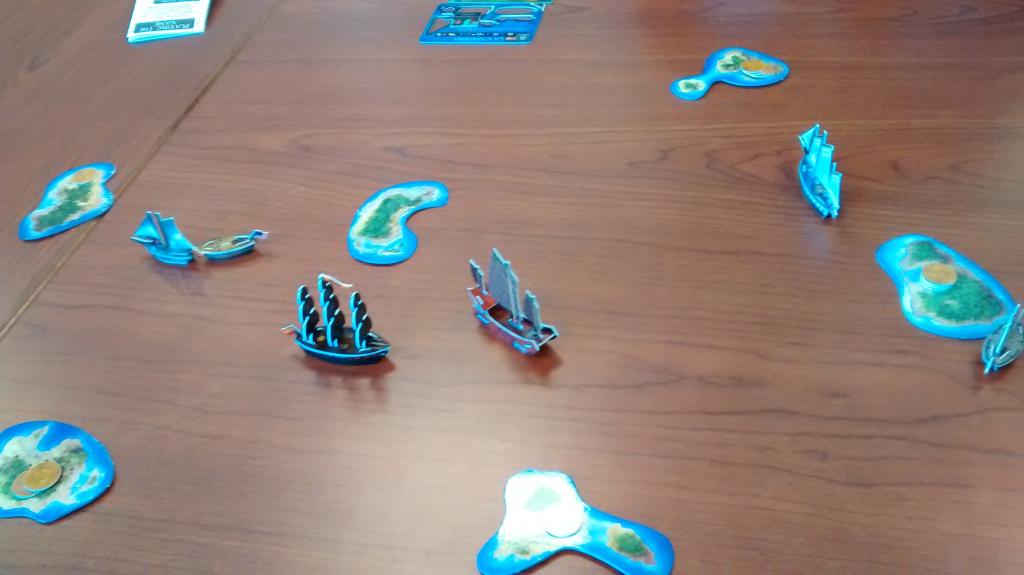 With the Americans already at a large disadvantage the Alma grabbed gold from a southern island as the Chesapeake raced to get away from the dangerous Virtuous Wind. In the meantime the Annapolis was repaired and she sailed out behind the Cazadora. 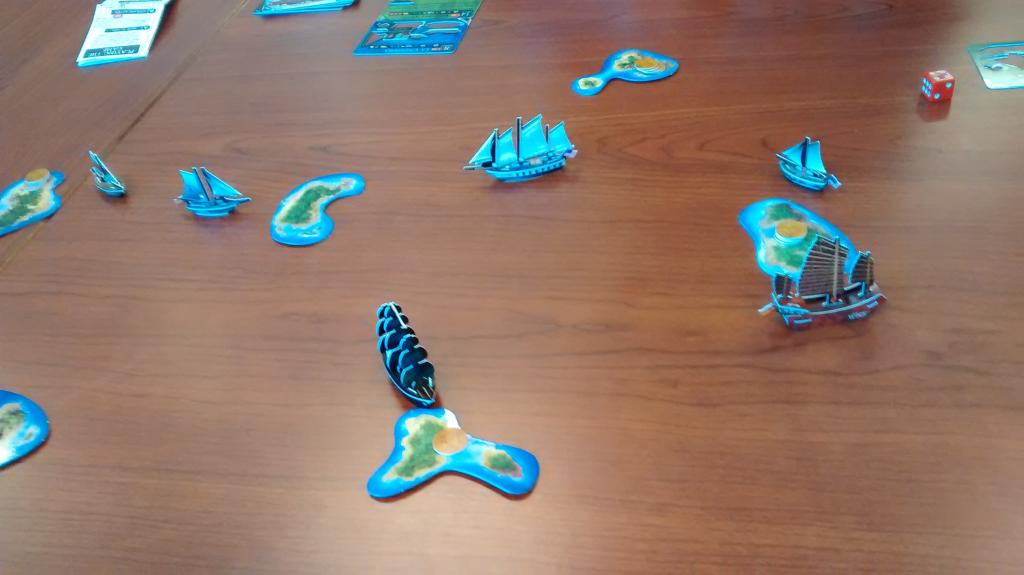 The Virtuous Wind couldn’t catch the nimble Chesapeake and settled for exploring an island instead. The Chesapeake grabbed gold in the north while the Concord cornered the captured Annapolis and looked to sink her former comrade. 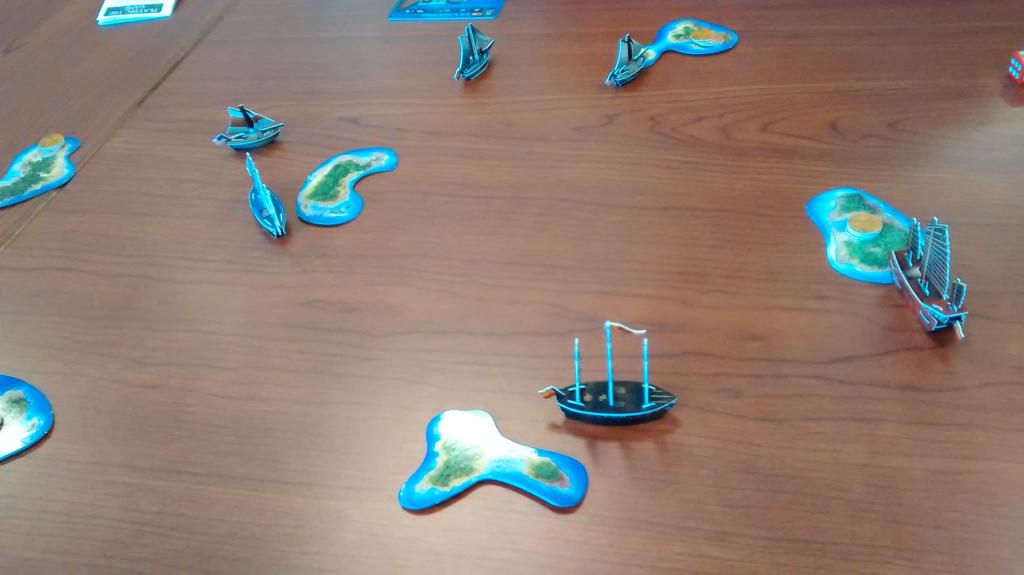 With a ram the Cazadora dismasted the docked Chesapeake, leaving the Americans with only the Concord! 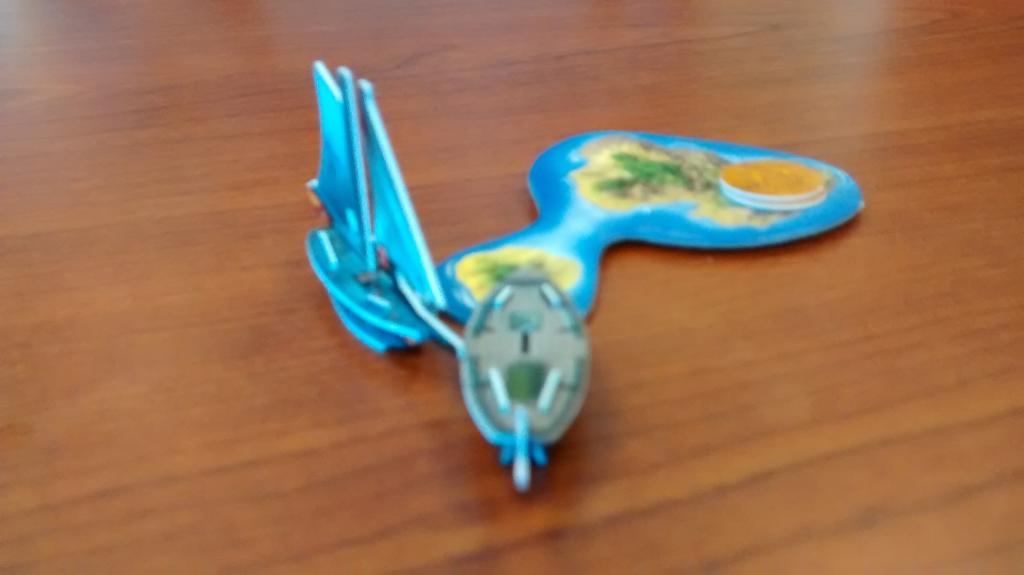 With no real hope in sight the Concord made a suicidal attack against the approaching Virtuous Wind, ramming off a mast. Her captain was cancelled by the Alma and it was all but certain who would come away victorious. 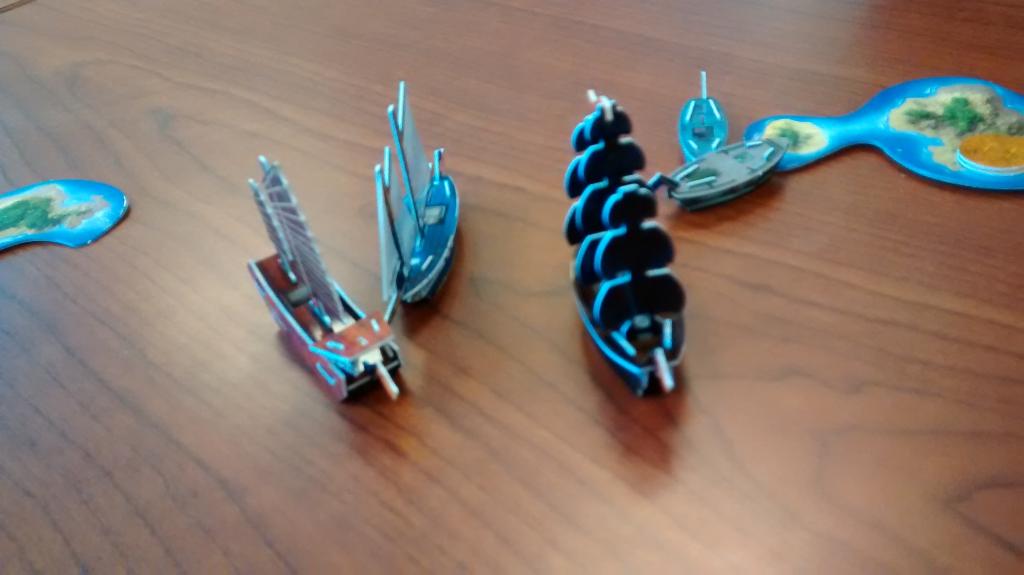 The Concord was taken out by the Virtuous Wind, ending the game with a 10-3 victory for the Spaniards!

The English went first and headed out to the nearby islands. The Hades’ Flame grabbed gold as the Fool’s Hope headed towards the middle of the sea to create chaos. 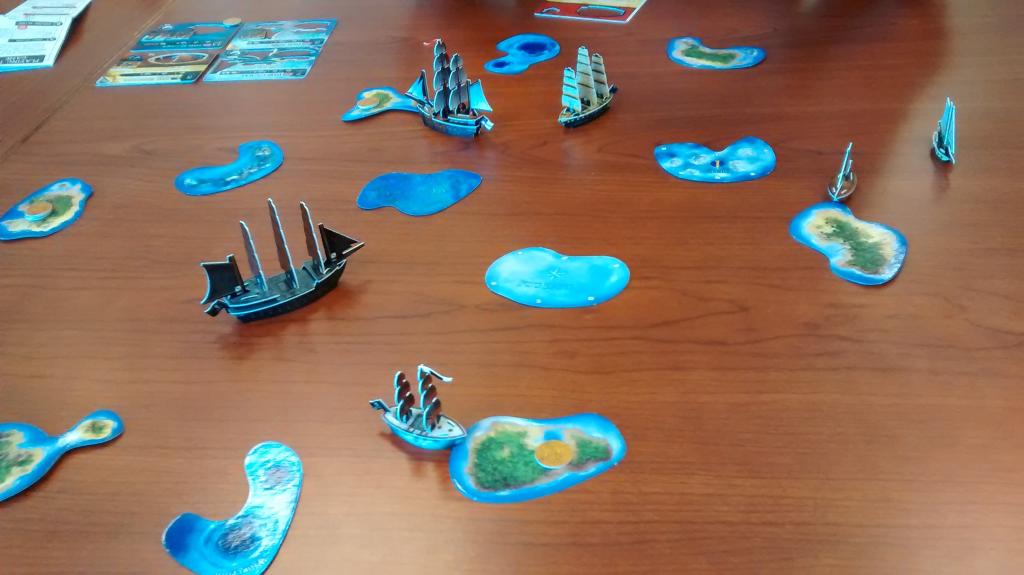 Unlike the last game terrain was featured in this one, with an unlucky iceberg roll taking out the lone mast on the Snipe. The Richards flew through a whirlpool in pursuit of the agile Hades’ Flame. The Fool’s Hope struck the English with force by sinking HMS Resistance with one broadside! After sinking the Englishman the Fool’s Hope towed the Snipe to take possession of the gold coin (worth 4 gold) she was carrying. 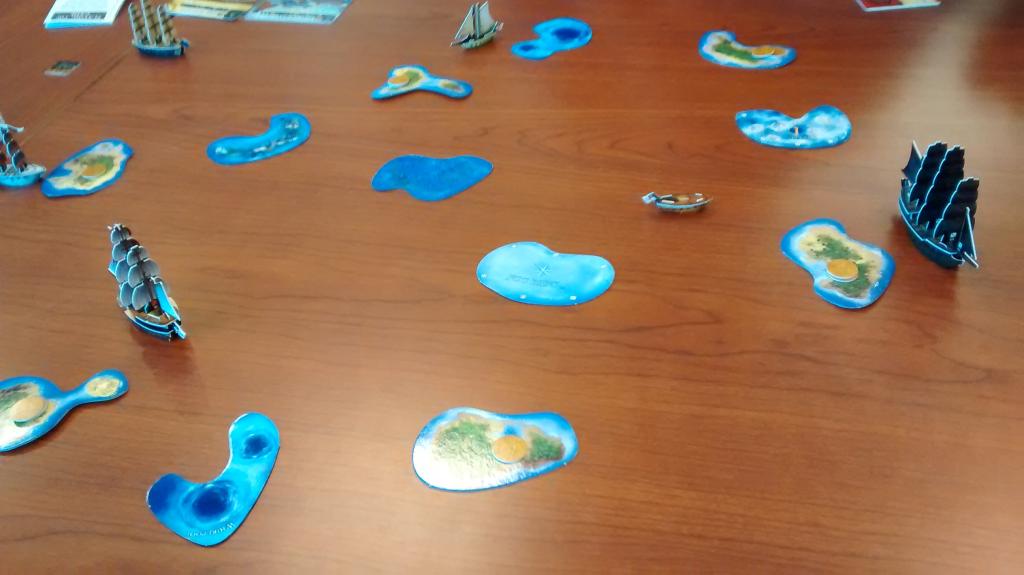 With no captain the Richards was forced to futilely chase the faster Hades’ Flame, with the ghost ship getting the better of the encounter. The Galway continued to ferry gold home as the Fool’s Hope looked to intercept the quick little blockade runner. 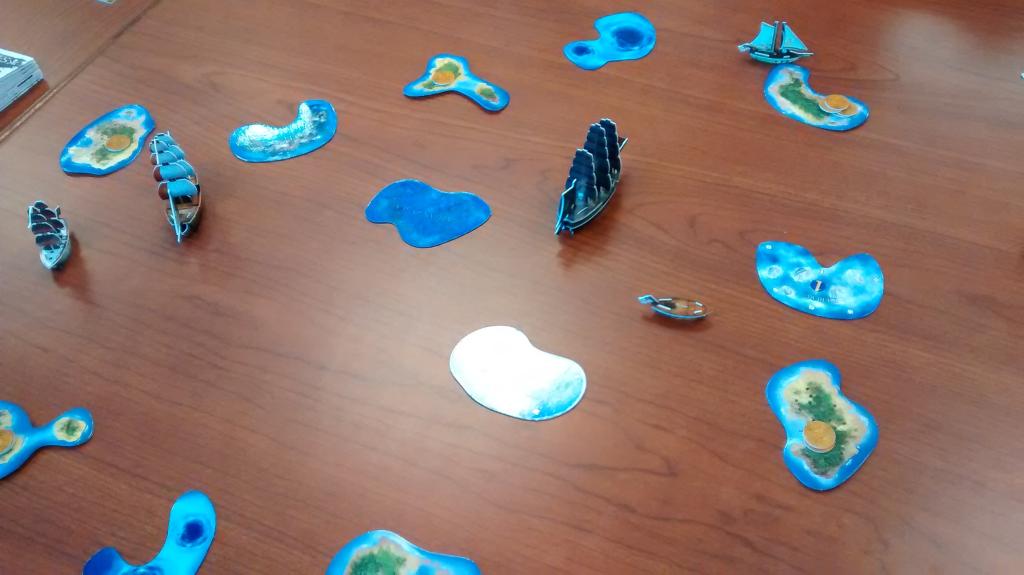 The Richards gave up chasing the Flame and grabbed gold from a southern island. The Hades’ Flame, frustrated from finding such low value coins (all 1’s and 2’s), zipped through a whirlpool in search of foreign gold. In the meantime, the Galway evaded the Fool’s Hope as the big Pirate ship tried to avoid the iceberg that had dismasted the Snipe. 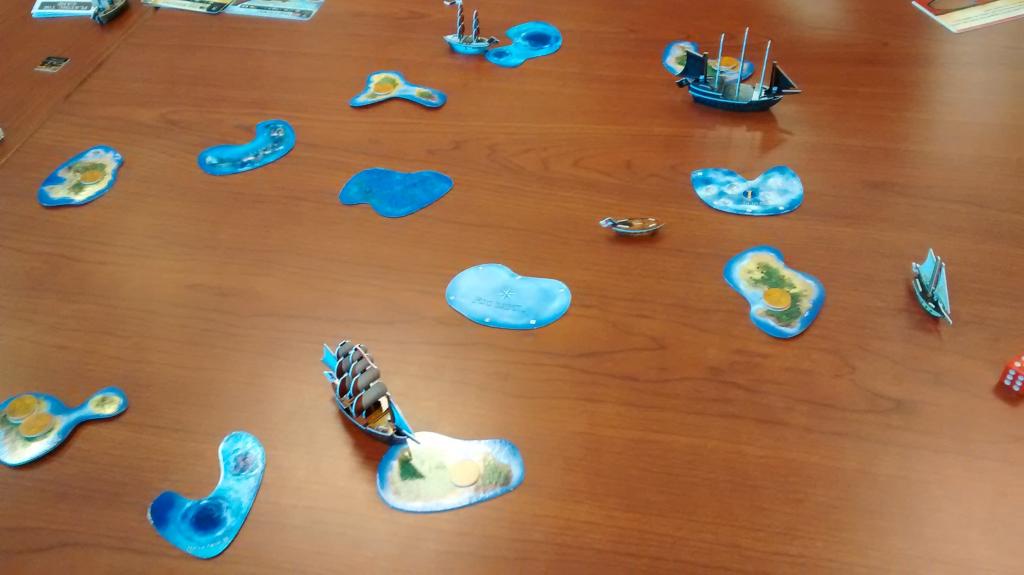 With no chance of getting home without encountering the Fool’s Hope, the Richards decided to sail straight towards it. The Galway accompanied her.

In a surprise move the Fool’s Hope once again towed the Snipe, but then ran into a fog bank! 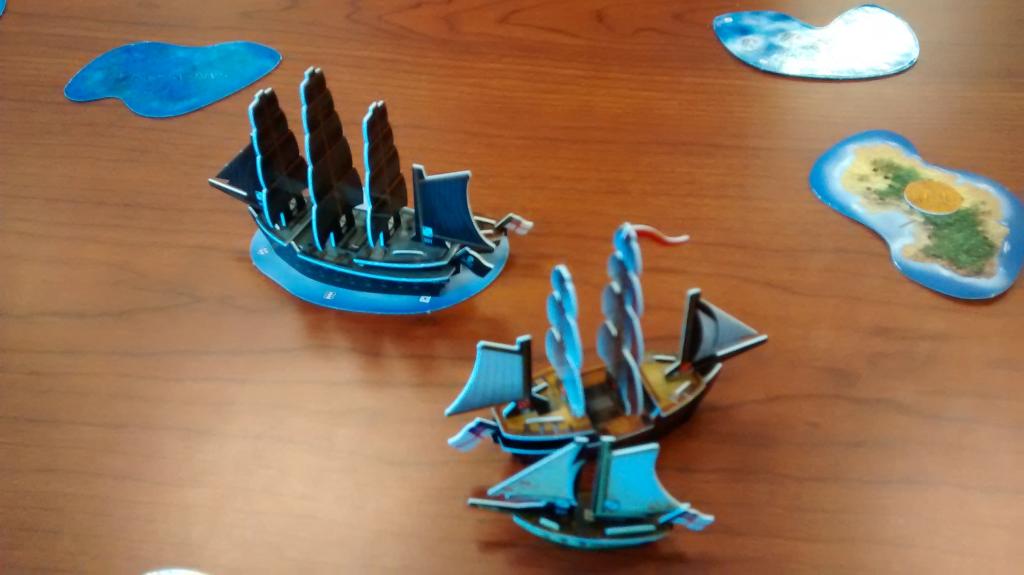 The Richards and Galway tried to escape but it was too late. The Fool’s Hope came flying out of the fog (using a free action to let go of the Snipe so she wouldn’t be permanently lost in the fog) to smash into the Richards. A combination of guns and boarding knocked over all four masts and killed the English helmsman. 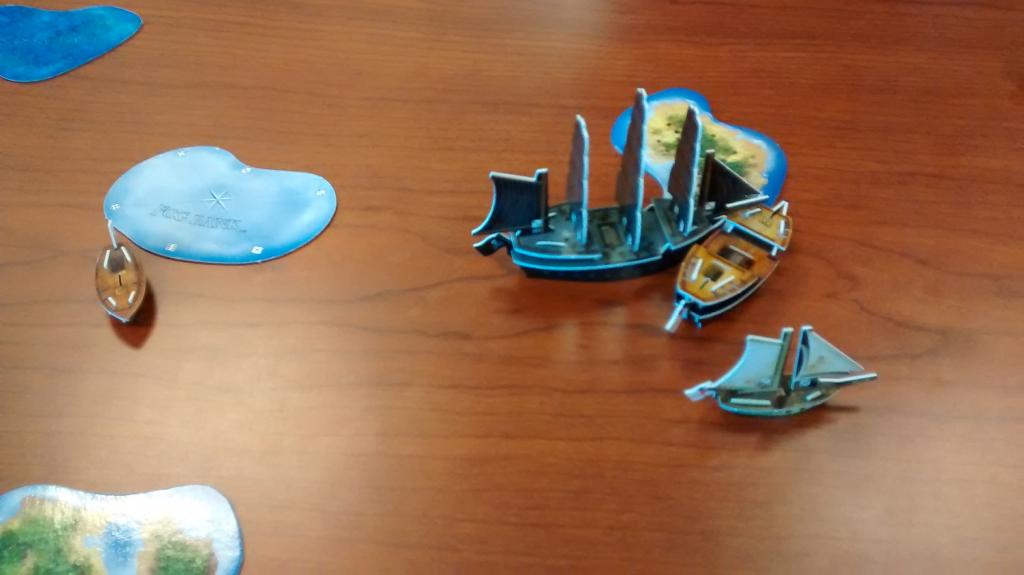 The Galway fled in terror as the Fool’s Hope sent the Richards to the bottom of the sea, giving 2 gold to the Pirates and 1 to the English.

The Fool’s Hope towed the Snipe home as the Hades’ Flame and Snipe brought back their final coins. With the docking of the captured Snipe all available gold had been unloaded to home islands, a rather uncommon occurrence.

The gold was tallied up, with the Pirates coming out on top 17-13! The Pirates had terrible luck finding gold, with both 4’s being found by the English early in the game. However, capturing the Snipe effectively won the game for the Pirates, providing the difference in a very good and close-fought game!

Posted in Battle Reports and tagged 2015.