We played again!  (previously on April 9th)  We decided to up the ante, using a 50 point build total along with one of my favorite house rules – at the end of the game, we would add up our points in play AND ending gold totals for a final score.

The American player rolled to go first, but we allowed him to defer and go last, therefore being able to choose his home island first.  This led to me going first again, but this time with a French fleet.  (all game pieces found in the Master Spreadsheet) 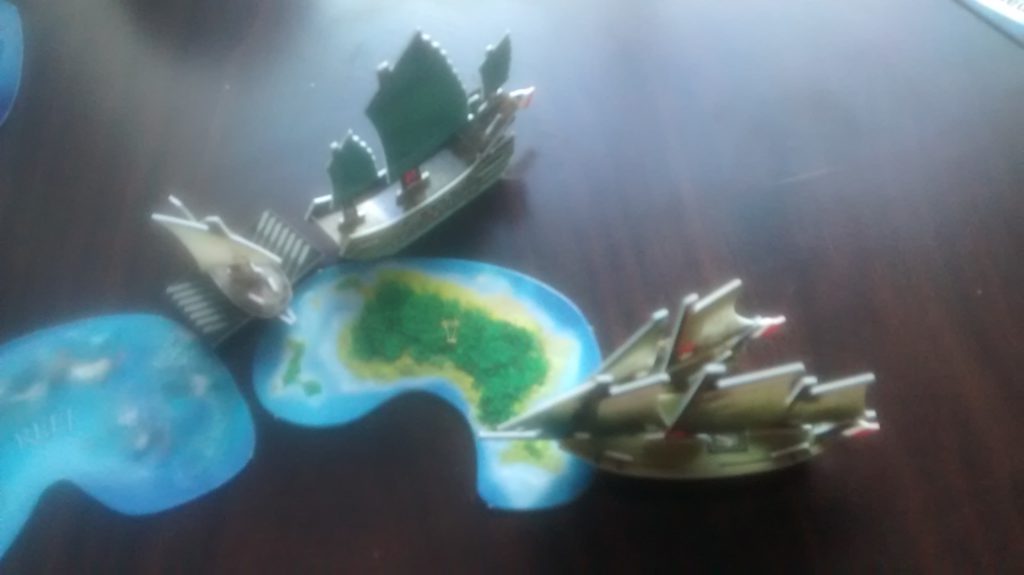 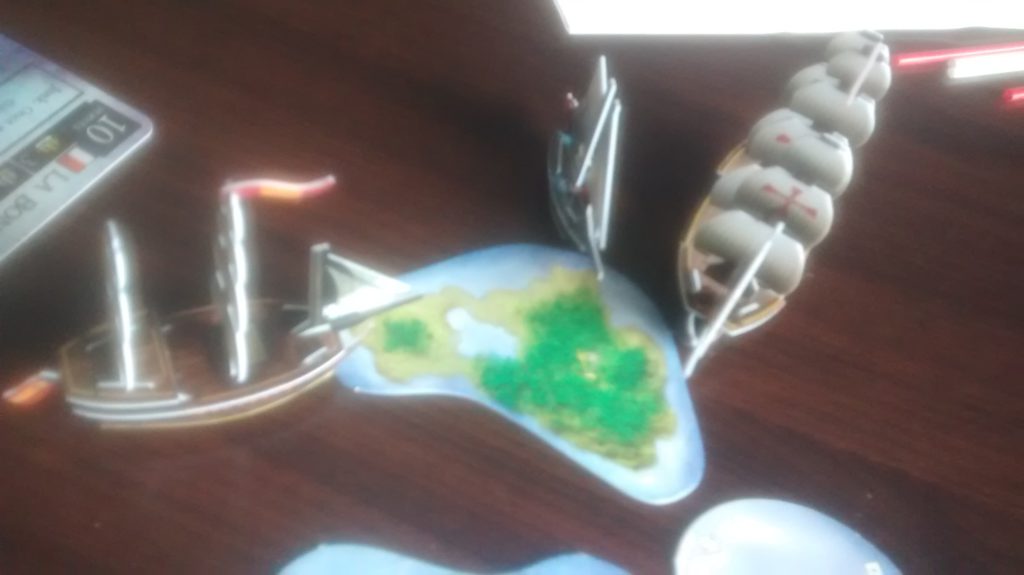 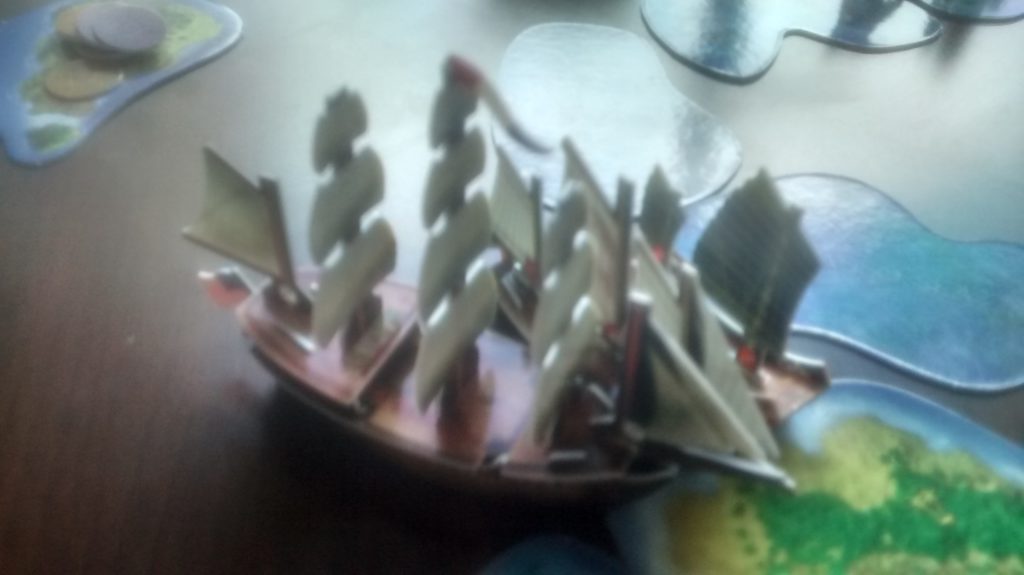 I wanted to introduce terrain, and we went ahead and strung some of it together and had it touching islands. Only 2 wild islands would likely make combat inevitable, with 8 coins on each. 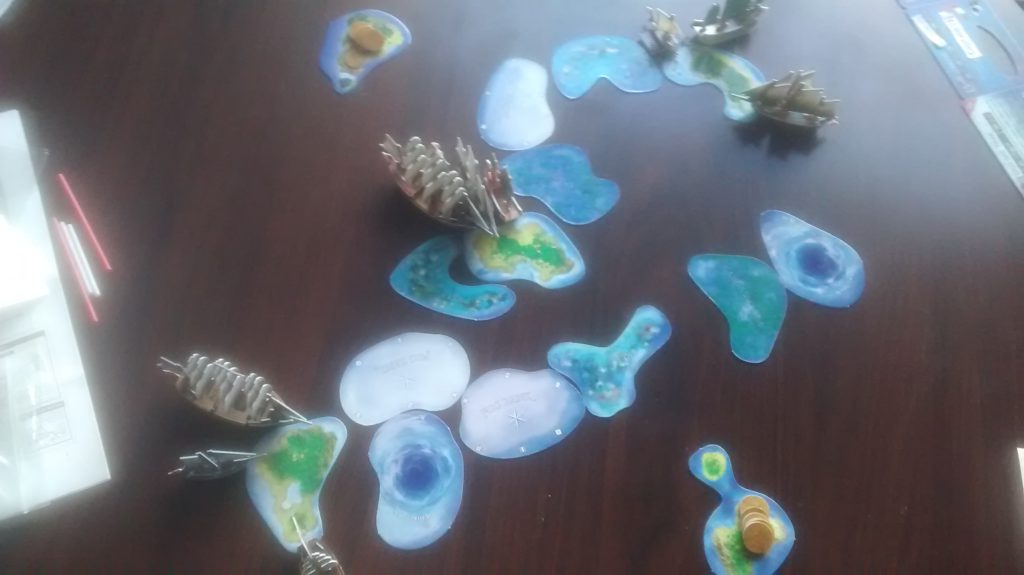 With a relatively tight setup, it was somewhat surprising to see no shots fired on the first turn. The Americans were the only fleet to not split their forces, mostly due to the terrain. 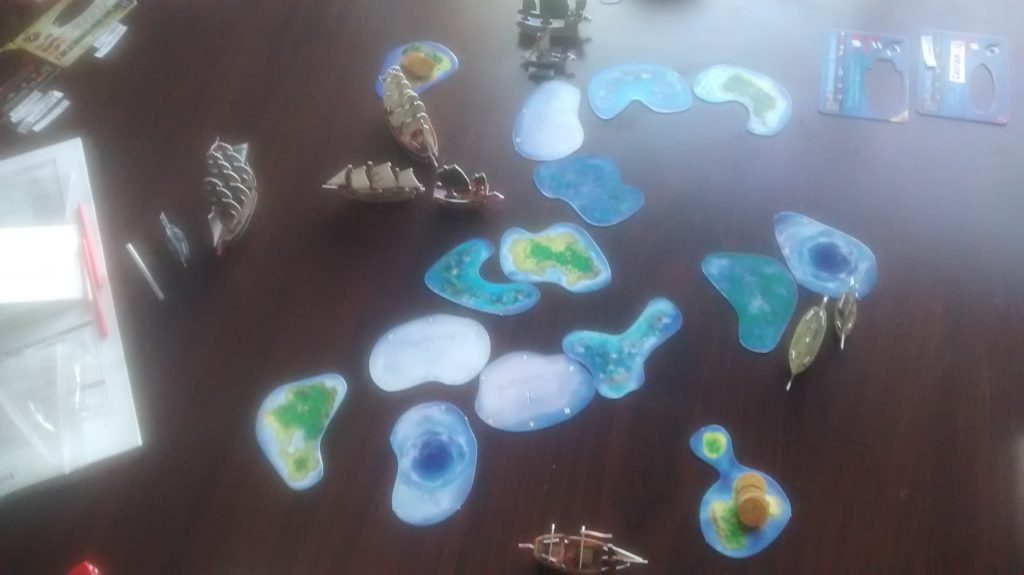 The Courageux shot 2/2 to smash the Duque, who was then seen fleeing for home. The Bonne Chance sort of failed at her escort duty, as the Neptuno got a pair of 6’s with her sniping ability to sink the Belle Poule! This eliminated 17 total points from play, as the BP was carrying 8 gold. The Triton picked up some awesome coins and headed for home. 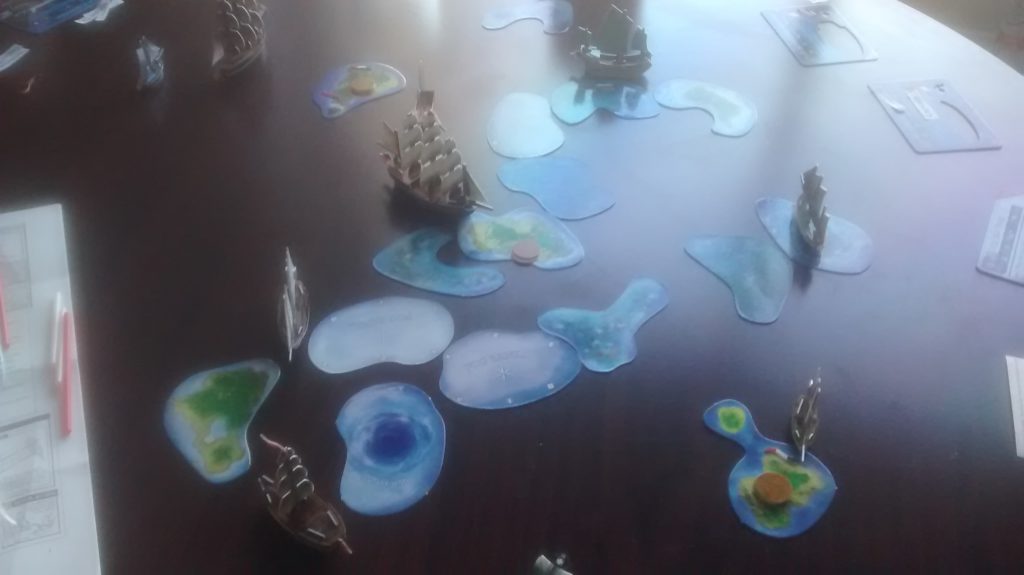 Major conflict erupts between the Americans and Spanish!! This was taken before the Bonhomme Richard even shot, as the Jarvis went 3/3 against the Neptuno. 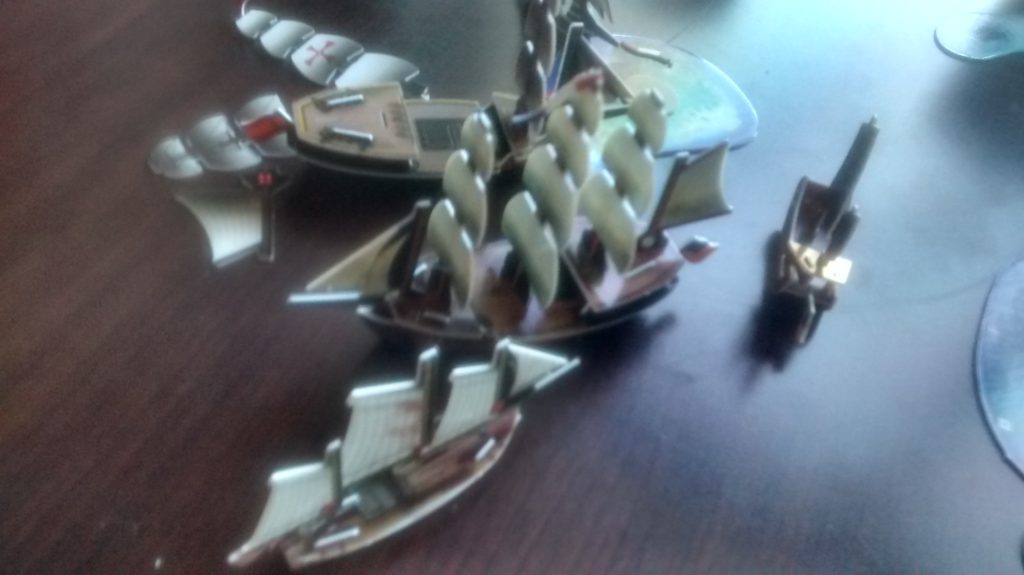 Bloodbath at the contested wild island! The Bonhomme Richard sinks the Neptuno, but the French sink the Sea Tiger with the Bonne Chance! A total of 29 points sinks to the bottom. 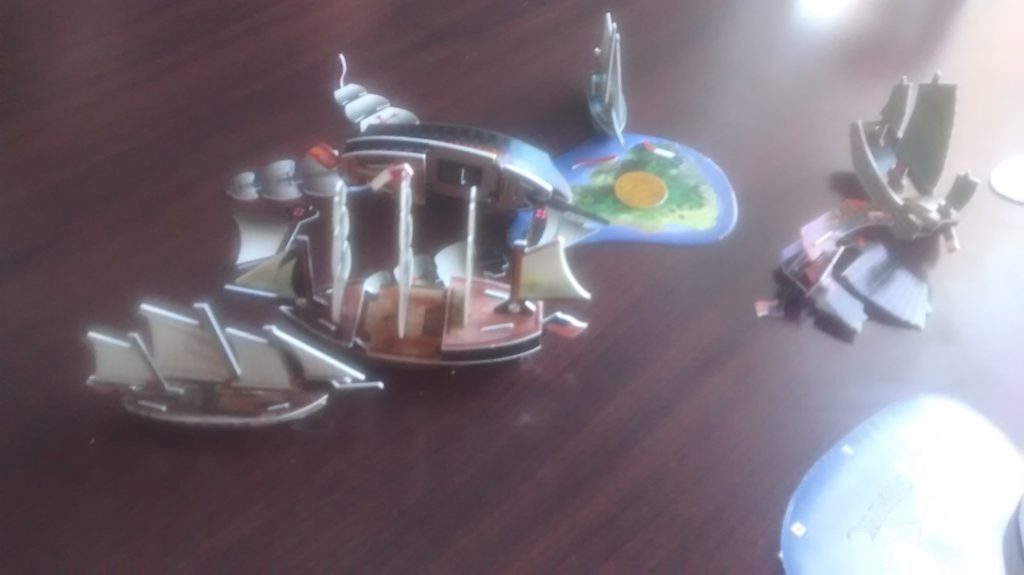 The Americans get revenge, dismasting the Bonne Chance! The Courageux and Triton have unloaded a total of 5 coins on the French HI. 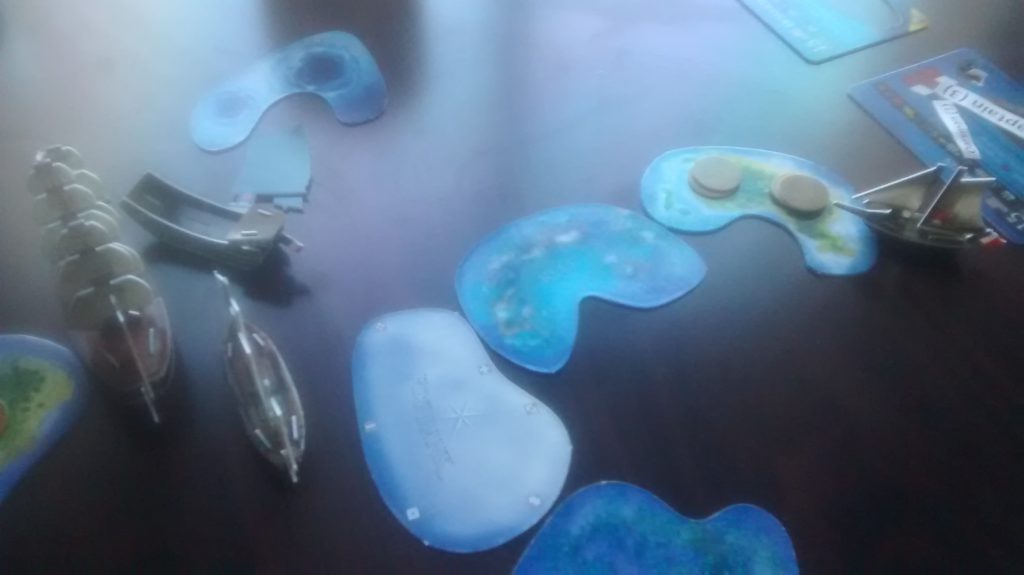 The Spanish looked to regroup and repair, with the Cazadora somewhat lucky to return home with a coin fully intact. As the French I was disappointed to have lost 2 ships already, but the Triton headed out to “her” wild island for a second trip. 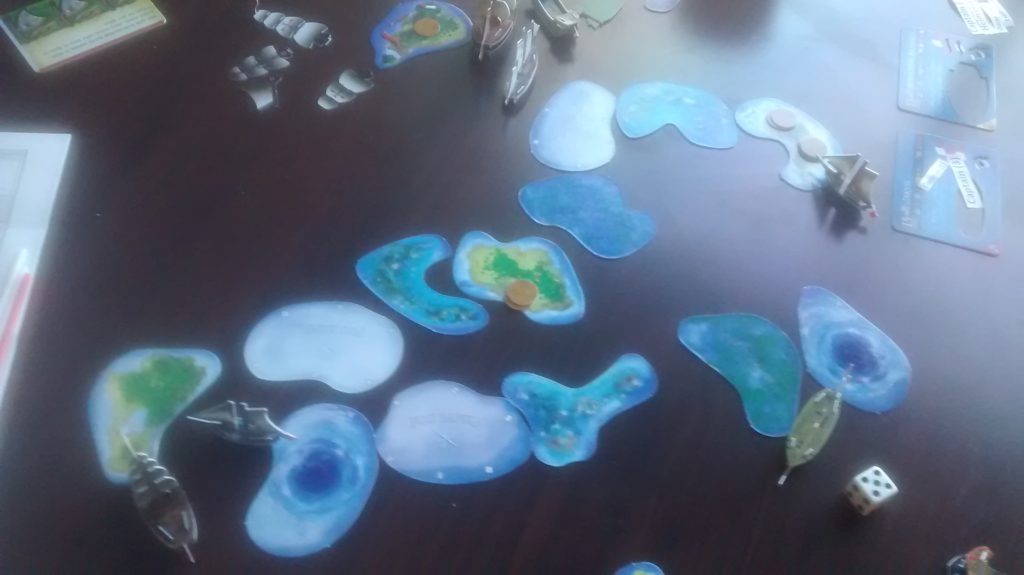 The Americans capture the Bonne Chance as the Duque finishes repairing: 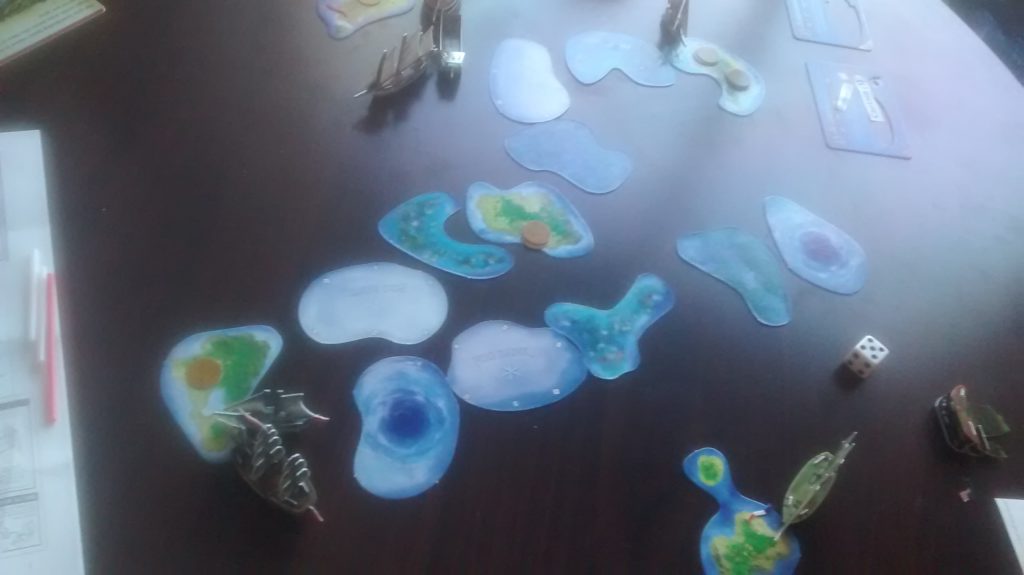 I maneuvered the Courageux around the HI – although the Courageux likely could have sunk the captured Bonne Chance, she might have been sunk or captured herself soon afterwards by the Bonhomme Richard. The Spanish arrived through a whirlpool to block the Triton’s path home, but she whirled to the other side of the French HI. The Jarvis loaded the last coin from the bloody island. 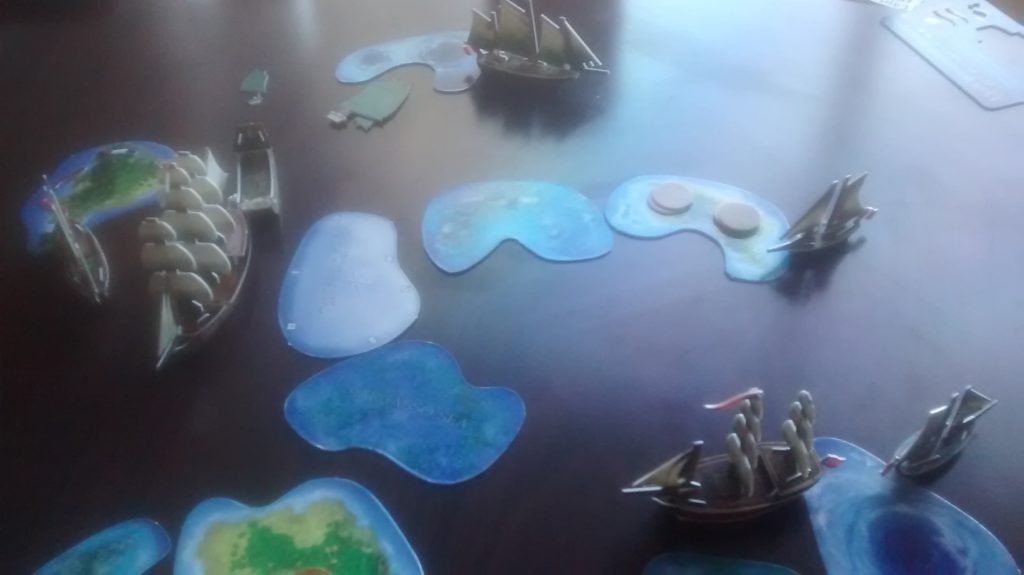 The French convinced the Spanish to sail the Duque towards the Bonhomme Richard (to block her path home) instead of shooting at the Triton, but the Duque struggled, getting stuck in a sargasso sea! The Cazadora went for it but was soon dismasted by the Courageux. The BR docked home the captured Bonne Chance as the Triton unloaded her final haul. 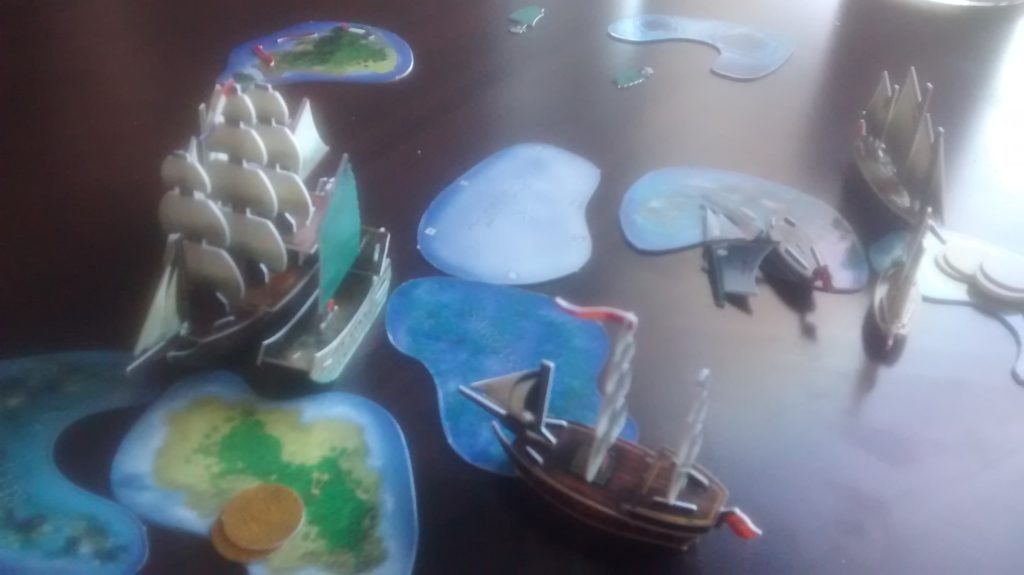 The BR made room for the Jarvis to end the game by unloading the final coin! 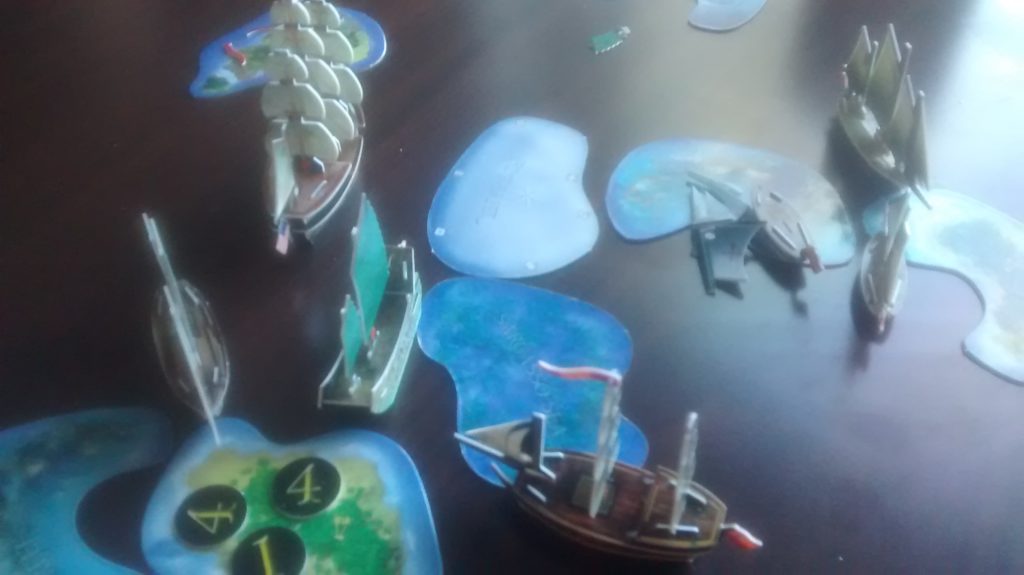 It turned out to be an awesome “banger” of a game, with the final scores almost too close to be believed!
French: 64 total points in play (36 from gold alone)
Americans: 63 (54 from ships and crew)
Spanish: 31

O_O The French win a 64-63-31 victory! We all had a lot of fun and will likely use the points in play house rule in the future! 😀 Thanks for reading, and stay tuned for more of this, or CG4! 🙂