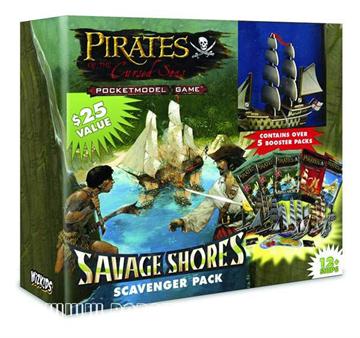 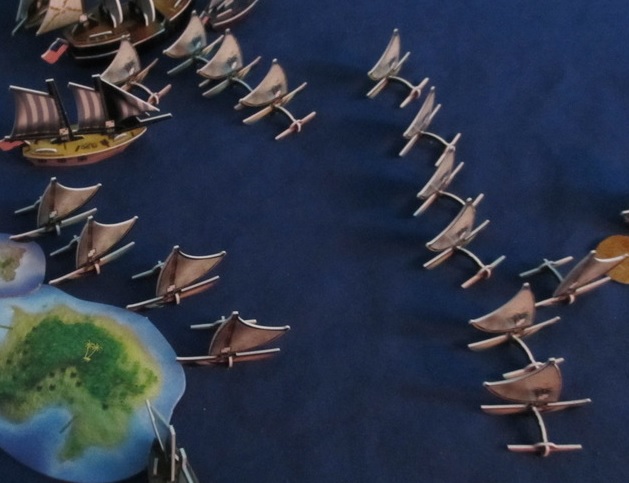 Savage Shores (SS, 2008) became the last set of Pirates CSG.  The set was only the size of half of a normal set (just over 50 game pieces), released in Scavenger Pack boxes instead of the normal game packs.  It featured a bunch of new game pieces and ship types despite the small size, and was notable for being the best set for gameplay since at least the Caribbean set.  A small blaze of glory before the game went out of print just days after release. You can find all of the game pieces in the Master Spreadsheet, and I’ve ranked the Top 10 here.

– Art: 4/5. Definitely stands out, but some ugly ships keep it from a perfect score. I think the named crew artwork was exceptional.
– Set Quality: 4/5. Some great stuff, mostly good. The sea monsters, lack of generic crew, and somewhat unbalanced pieces (navigators, cargo masters, American canoes, Libellule, hoists) keep it from a 5 for me.
– New Content: 4/5. Canoes and hoists are both fantastic, arguably too much so. Hoists are the most excusable Pokeship (if they are even considered to be one) simply due to how interesting they are in terms of gameplay. Navigators and cargo masters are both frustrating to deal with in large games, but they’re a welcome addition to most players.
– Collectability/Misc: 4/5. The set was almost too easy to acquire, and the box idea caused some consternation among people who didn’t or couldn’t (or still can’t!) complete 10 masters. The SR’s were relatively common as well, but I give the set a 2/3 for collectibility. The Miscellaneous score gets a 2/2 due to the set’s good reputation and a kind of positive farewell after the long decline. The set is generally viewed with very positive vibes due to it being so unique in so many ways, and a beacon of hope that unfortunately never was.
= Overall: 16/20. Very good but not all-time great.