The Second Battle of Diamond Rock in the Caribbean, showing an effective English turn: 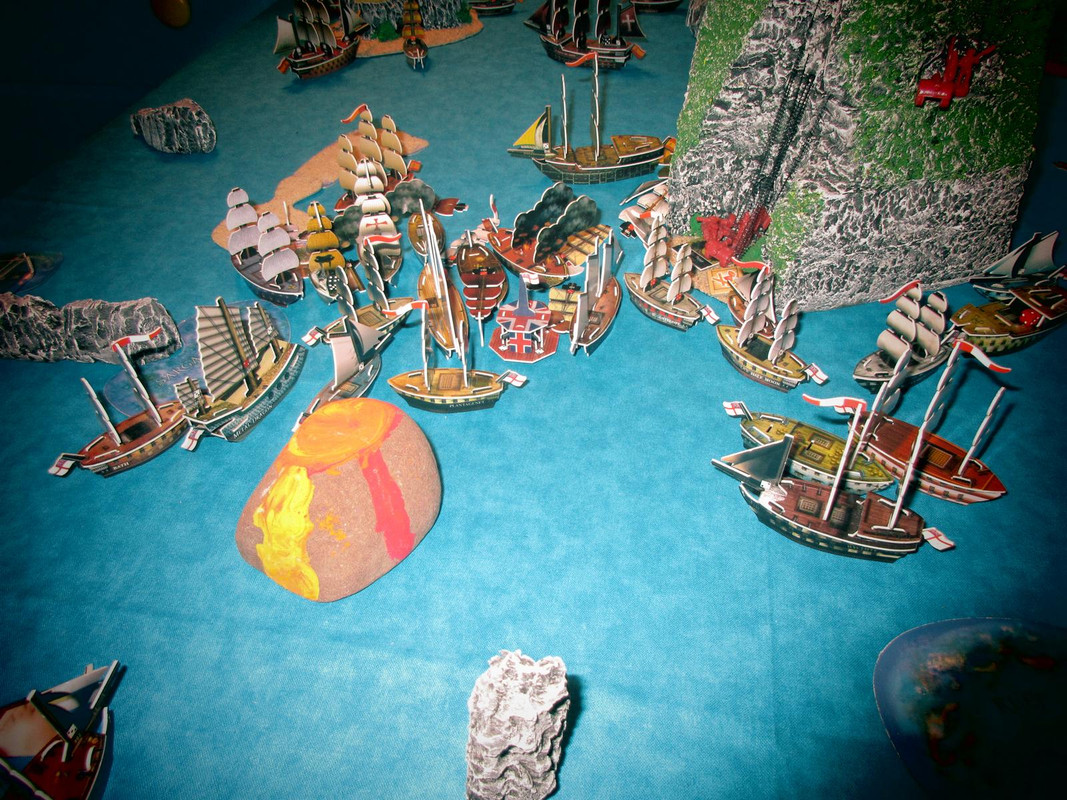 Both the Serpiente and Asesino de la Nave were set on fire, while the Profeta was dismasted. 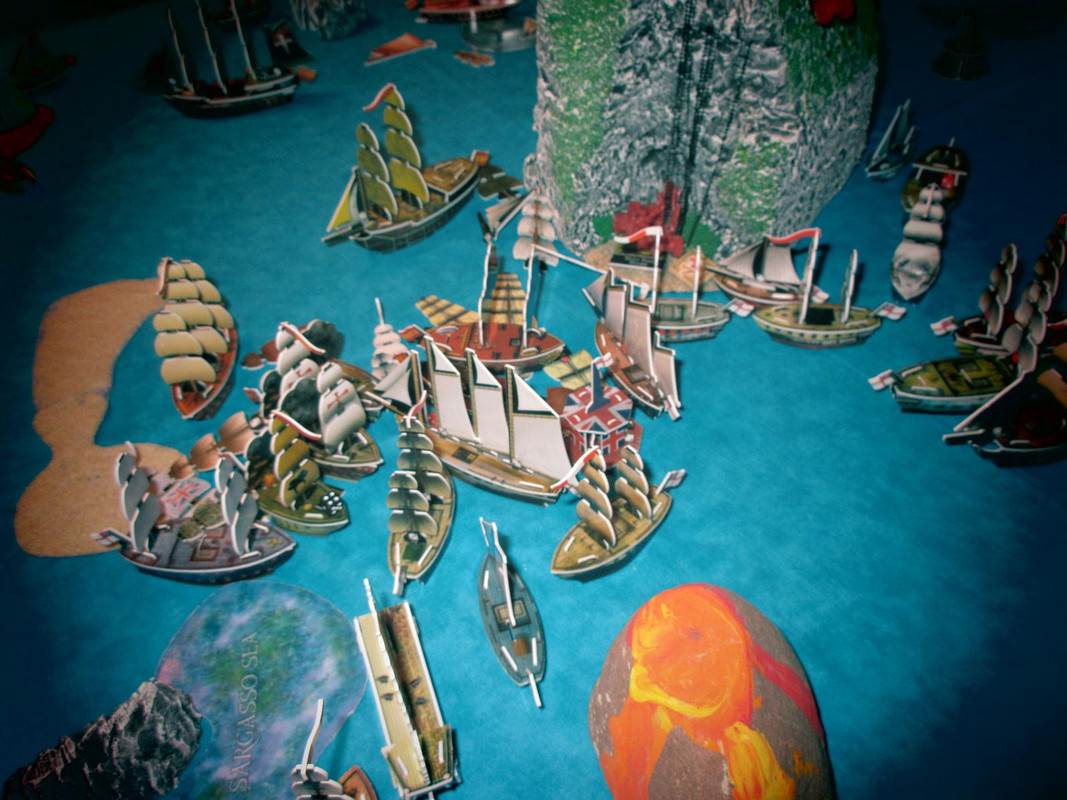 Off to the right, the Burma has been chain towed out of the area by a trio of English ships, while the Duke of York heads home for repairs. 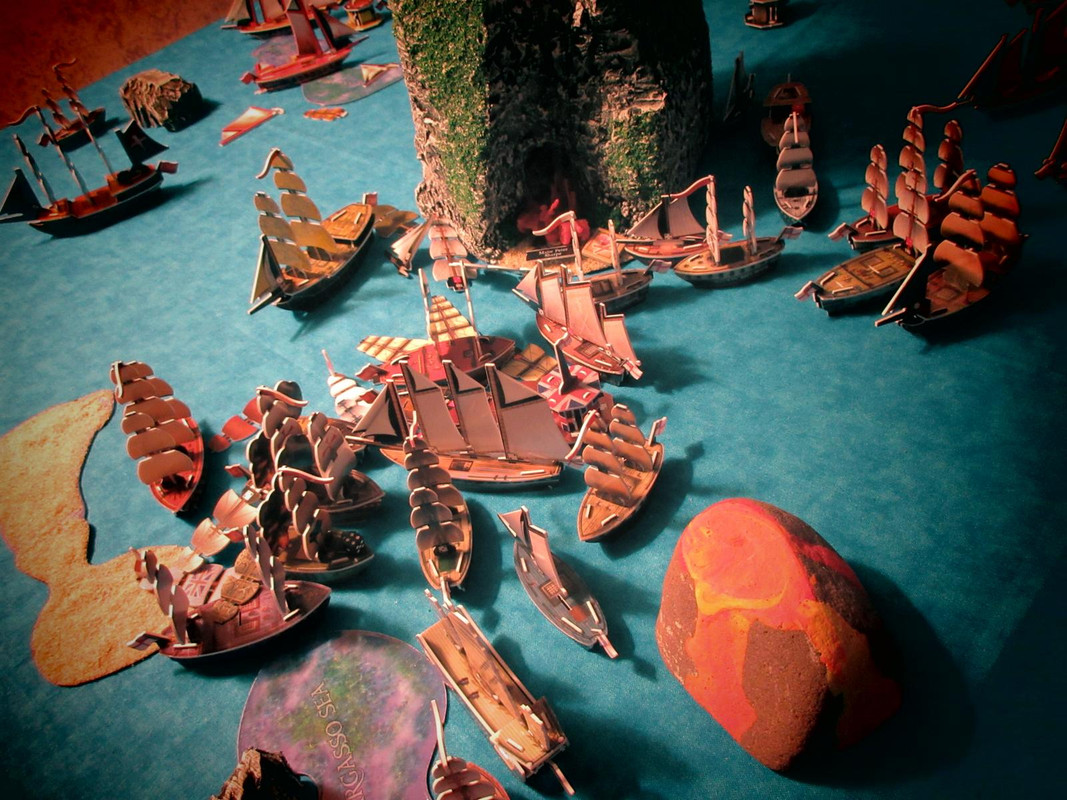 At last, the Lord Algernon and Orkney have docked home the towed ships. 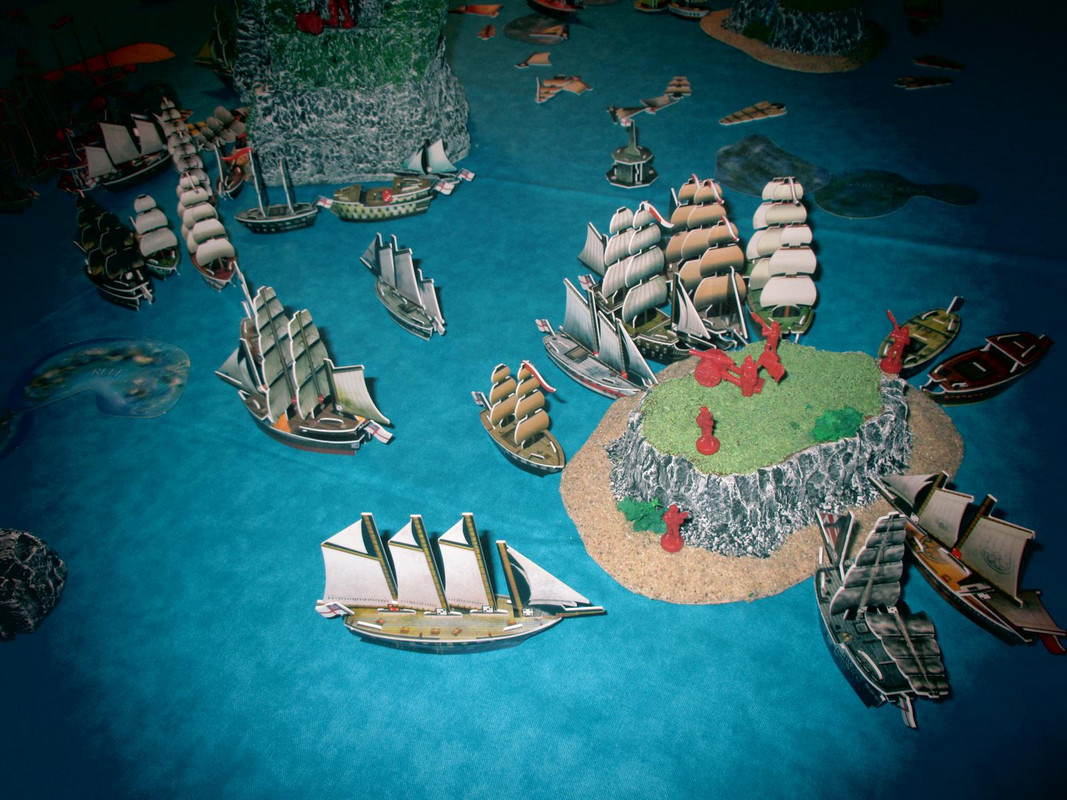 A truce has been agreed to!! It is a lengthy 10 turn truce, with neither side firing at opposing ships for 10 turns total. This happened after some negotiations between the English and Spanish. Both sides are utterly exhausted by the war effort, and both have seen many gunships sunk or captured. They are on the verge of losing points in their fleet instead of gaining them long-term with how things have been going. Both fleets are also among the weakest in the game right now (in fact they are the two smallest by point count of the starting factions), and although they don’t know that, they do know that continual warfare will likely result in neither of them winning much of anything. In addition, the goal of commanding Diamond Rock has seemed overly ambitious and not even that beneficial to the Spanish, who have been doing alright running gold and resources from Paradise Island. Meanwhile, the English vastly underestimated the Spanish and find it hard to believe the Spaniards nearly won a battle and have put up a great fight in the latest one. The English are eager to retire, though here it was the Spanish who opened the negotiations as they likely would have lost the battle if they had continued fighting. 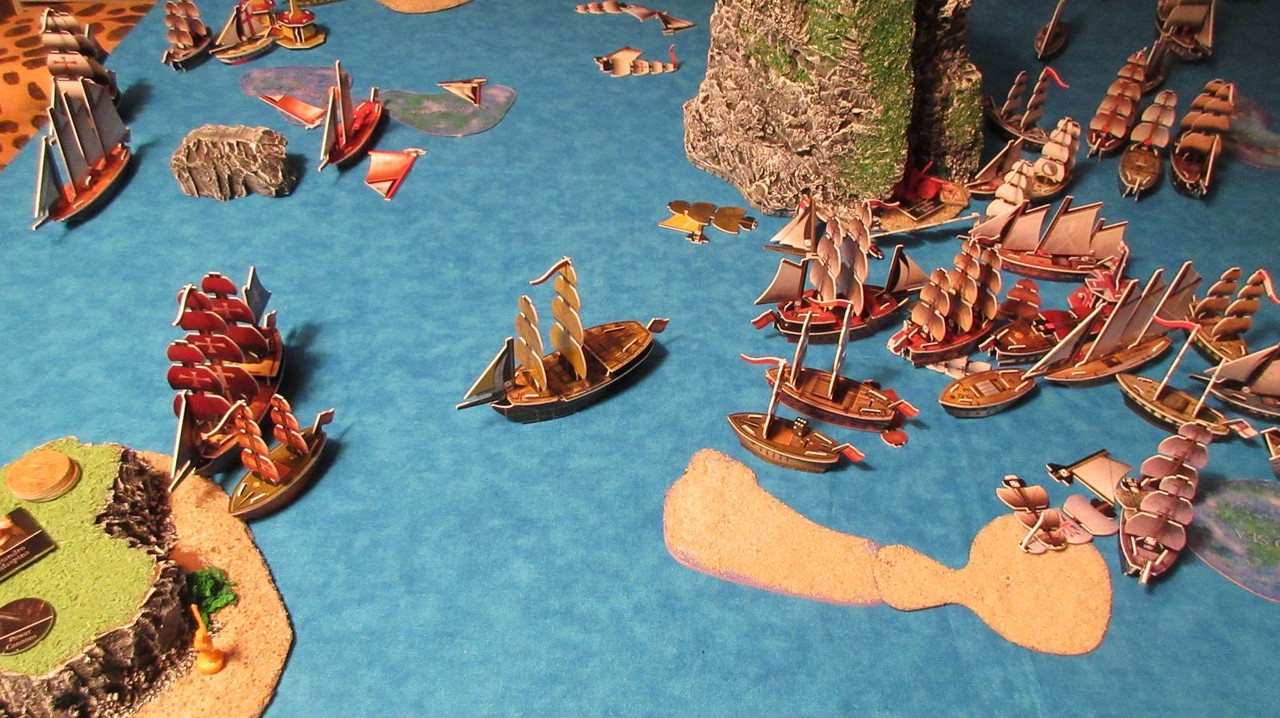 The French sail out of their Harbor in force! 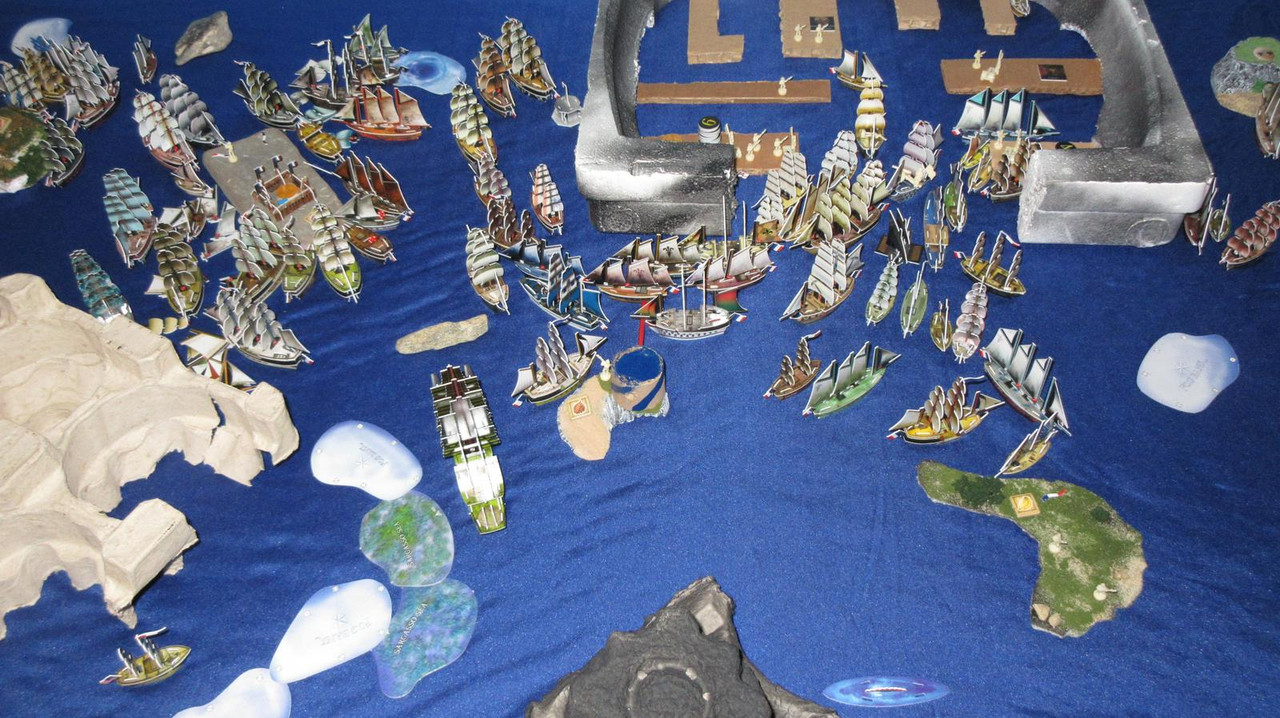 Preble gives his AA to the USS Mercury, who explores the Castle for the first time!! However, exploring the Castle and what it has to offer fully may take a few turns, similar to Diamond Rock. At the right, the Brandywine continues to scout the eastern side of the Castle, nearly glimpsing the Celtic Fury through the fog. 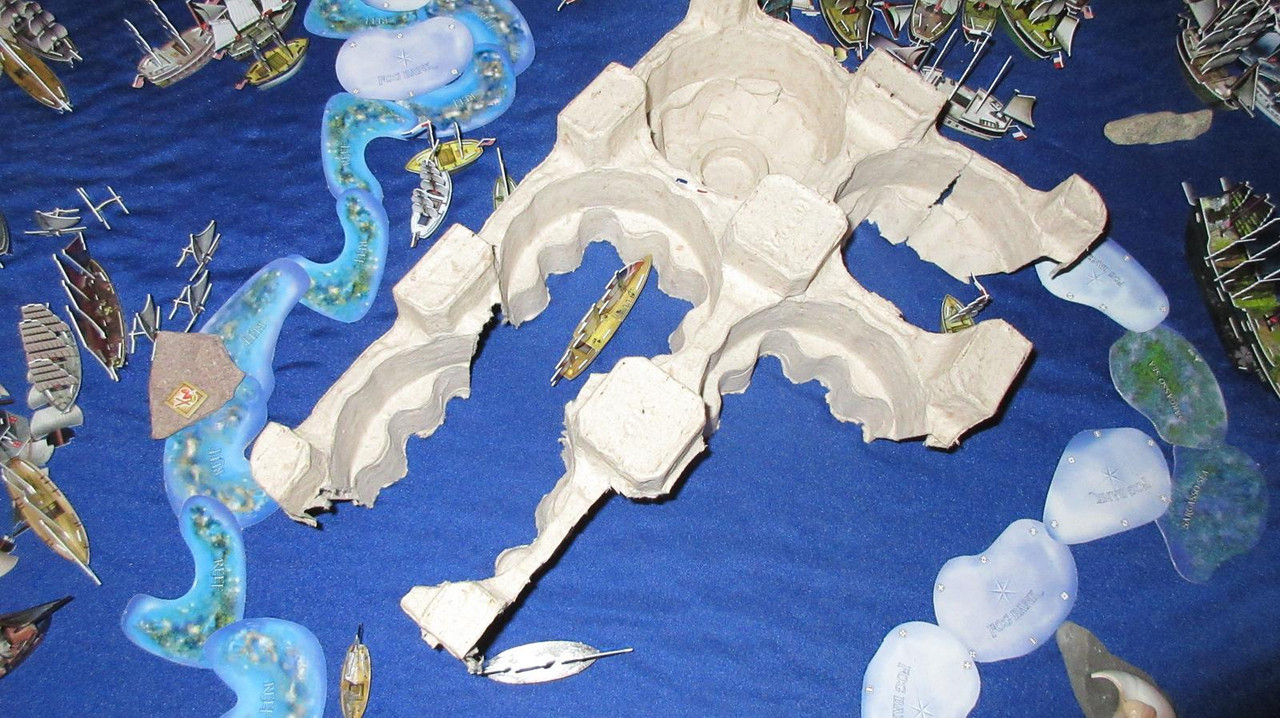 The huge American fleet continues to operate, though with less defined objectives than they’ve had for around 20+ turns now. They finally moved their artillery unit on the lumber island to the east, and it points directly at The Flat. Just west of that island, notice the American troop transports rounding the island and beginning to head south. At the bottom, a small “super squadron” heads northeast, led by the Blackwatch and Concordia. At the left, a full half-dozen American gunships simply wait out the logjam and await further orders. Those ships are simply getting out of the way at this point – the Americans have so many ships that they don’t know what to do with them all! However, with declarations of war against the other two strongest factions in the game (Pirates and French), they will surely need them eventually. 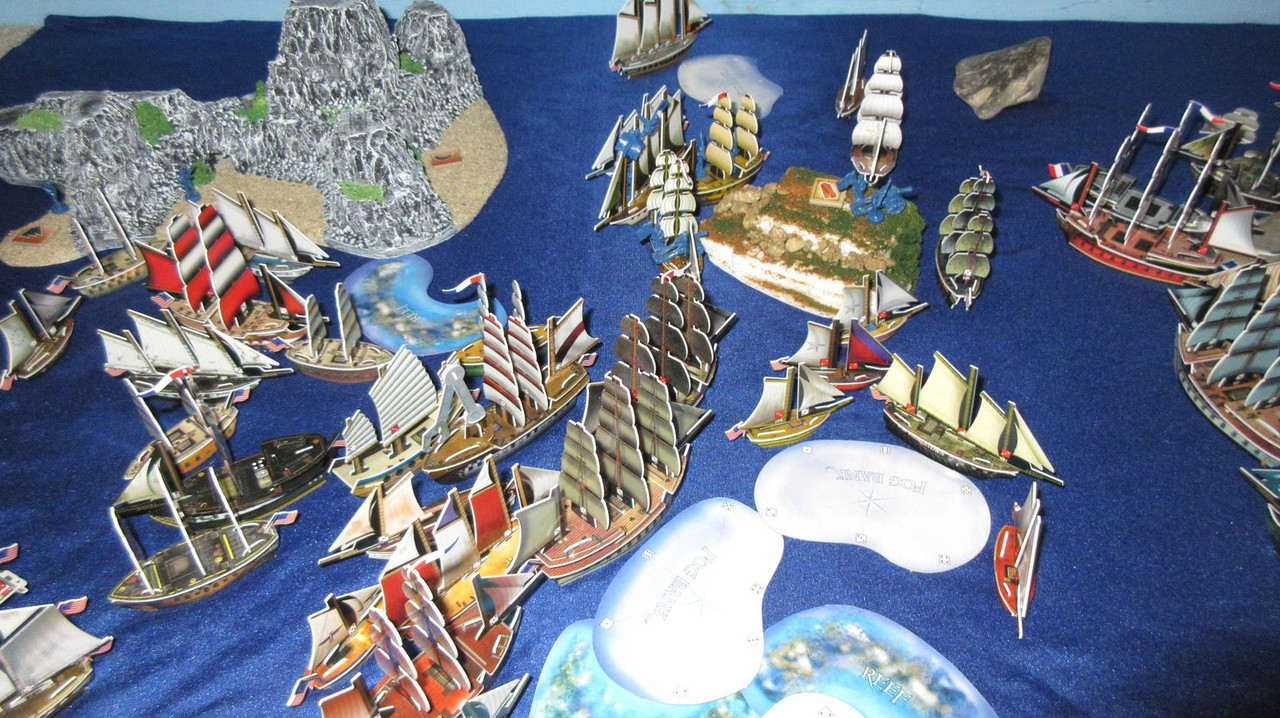 The United States, Appalachian, and Vermont join Preble’s President on whirlpool guard duty. The towing and repairing efforts are mostly sorted out by now, and you can see that Ruby Island is finally being visited by cargo ships once more. 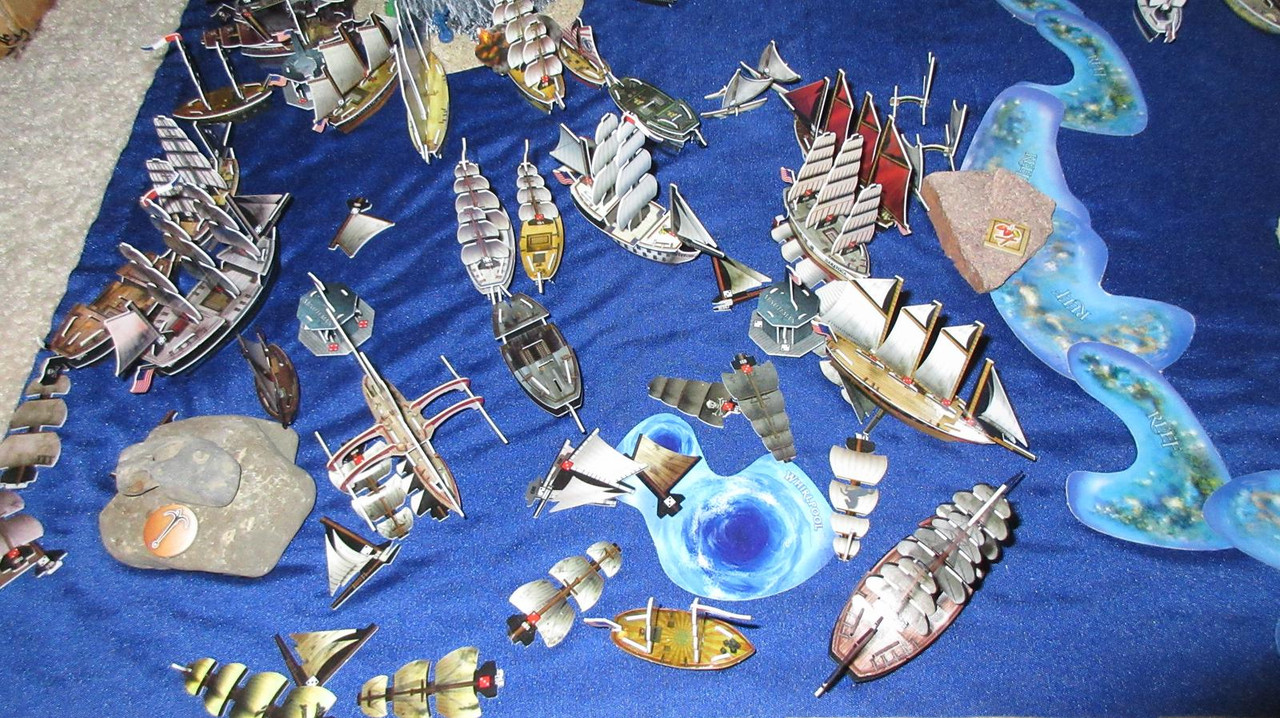 The American home island, crowded as usual. The James Madison and Louisiana are not on fire; I’m using those flames to represent exploding shot. The Americans used 15 gold to purchase 5 of them, which they intend to use against the reefs. With significant logjams still present near the lumber island, and the big discovery of the Castle just recently, the Americans will once again try to clear a path for ships. In the long term, one could argue that the reefs could serve as a defensive line if a faction tries to eliminate the Americans at their HI. However, the Americans are quite ambitious in this game and would like to do the opposite – drive opponents away from their own home islands, so they don’t have to play defense in the first place! Plus, with a major Pirate incursion via the whirlpool, there is a way to hit the Americans near home without passing over the reefs. 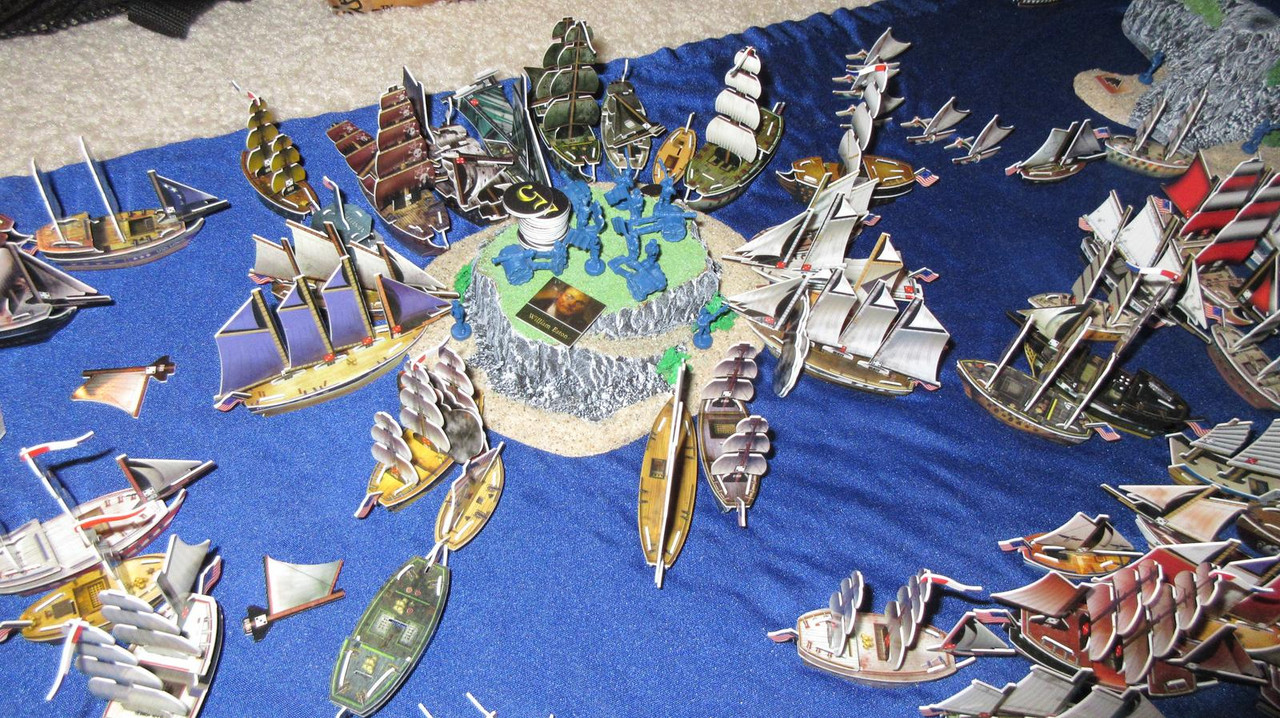 No less than 11 ships are repairing at the American HI, 5 of them Pirate captures and more ships joining them soon. As is typical for me in these types of games, once a battle ends I will sometimes gather a ship’s masts and place them on the deck once the ship begins repairing, rather than finding each one individually among the wreckage on the turns it repairs. 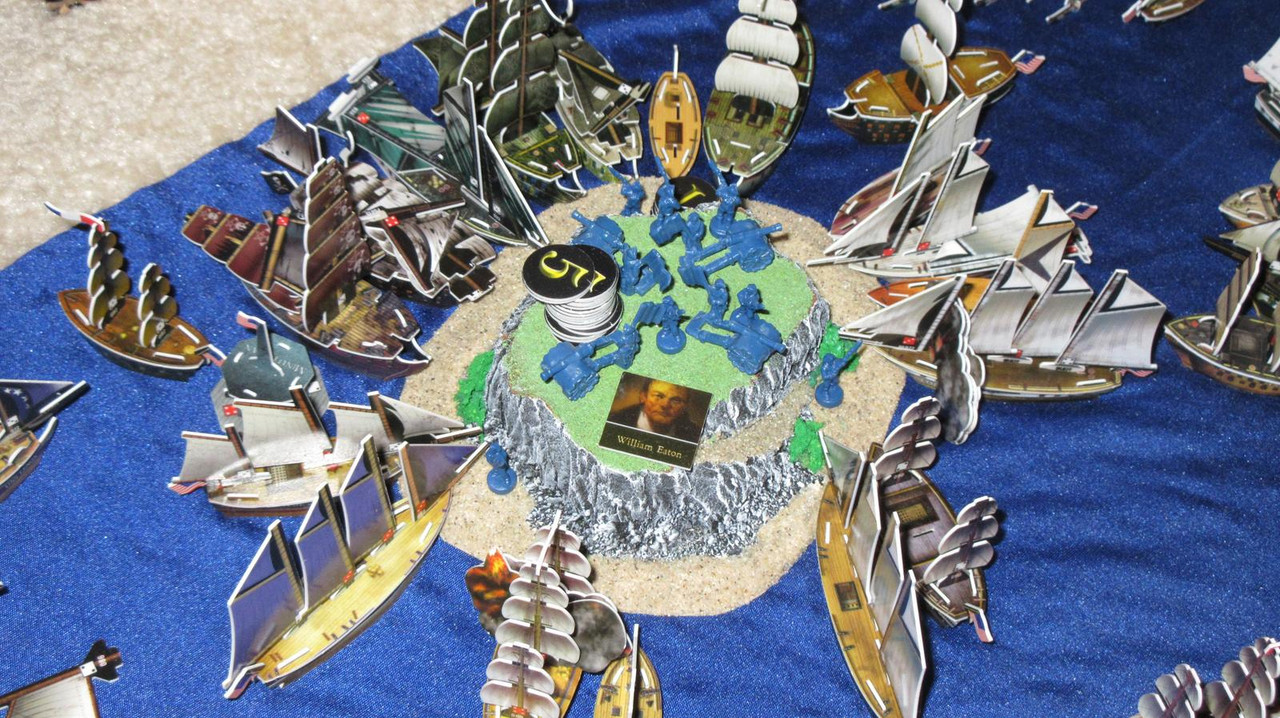 With a Caribbean Truce in effect, the two most recently active wars have been put on hold. However, the wars between the JR/Cursed and Americans/Pirates could erupt again at any time. Possibly even more interesting, Turn 60 will see the resources finally change again! The most recent change was for 5 turns but was extended to 7 through two random changes when I rolled 1’s. Many factions are sitting on large stockpiles of spices, so if those happen to skyrocket in value it could change things big-time.