Finished up Turn 58 and started Turn 59.

The game is about as peaceful as it’s been for quite some time, but not in the Caribbean! The English strike back hard against the Spanish, getting some quality shots in with firepots from the Guy Fawkes and Durham setting the Ebro and Santa Catalina ablaze. The Duke of York and Burma are trying to leave the battlefield to repair at home, while the Meresman, Platagenet and Metal Dragon are coming up from the south to replace them. So far the accuracy of the English cannons has negated the Spanish numbers advantage, which is dwindling as a result. 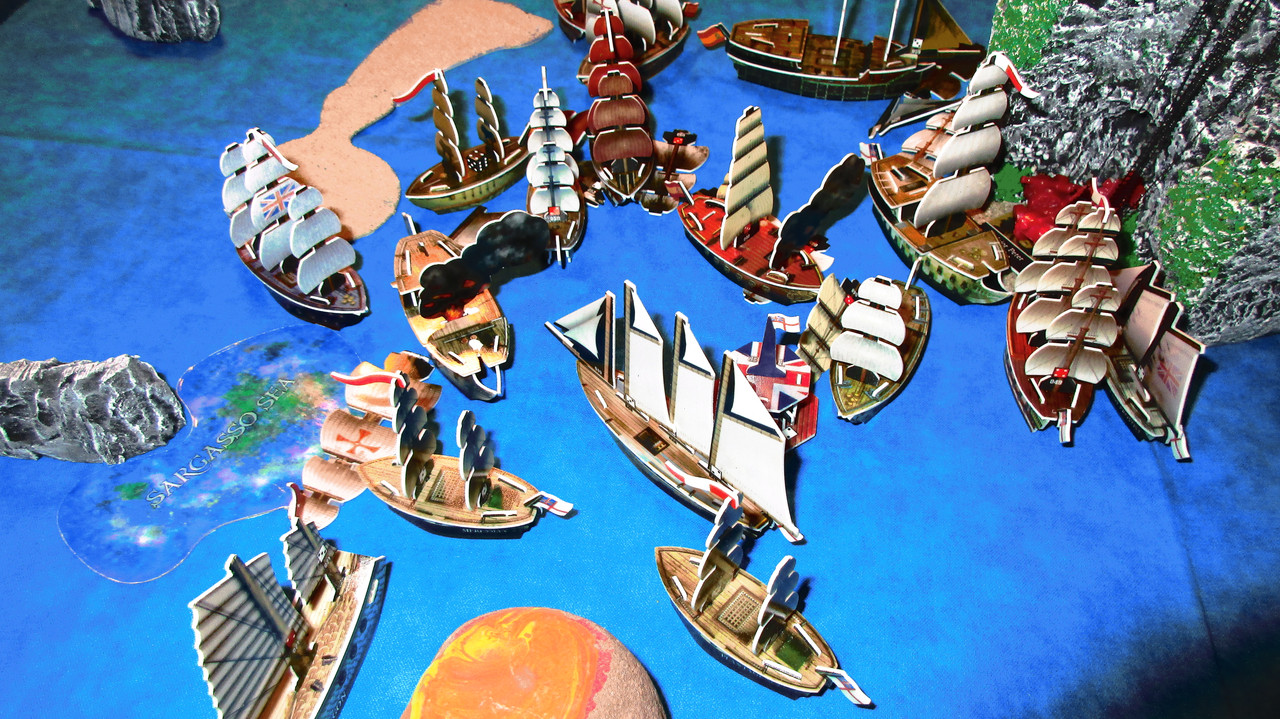 Back at the English HI, many repairs are being carried out. The Resolution, Ark Royal, Lord Kettering and Extremadura are all being operated on. The Granville, Resistance, and Corazon del Mar will join them shortly. The Wycliffe has finished repairing and speeds out to assist in the war effort against Spain. 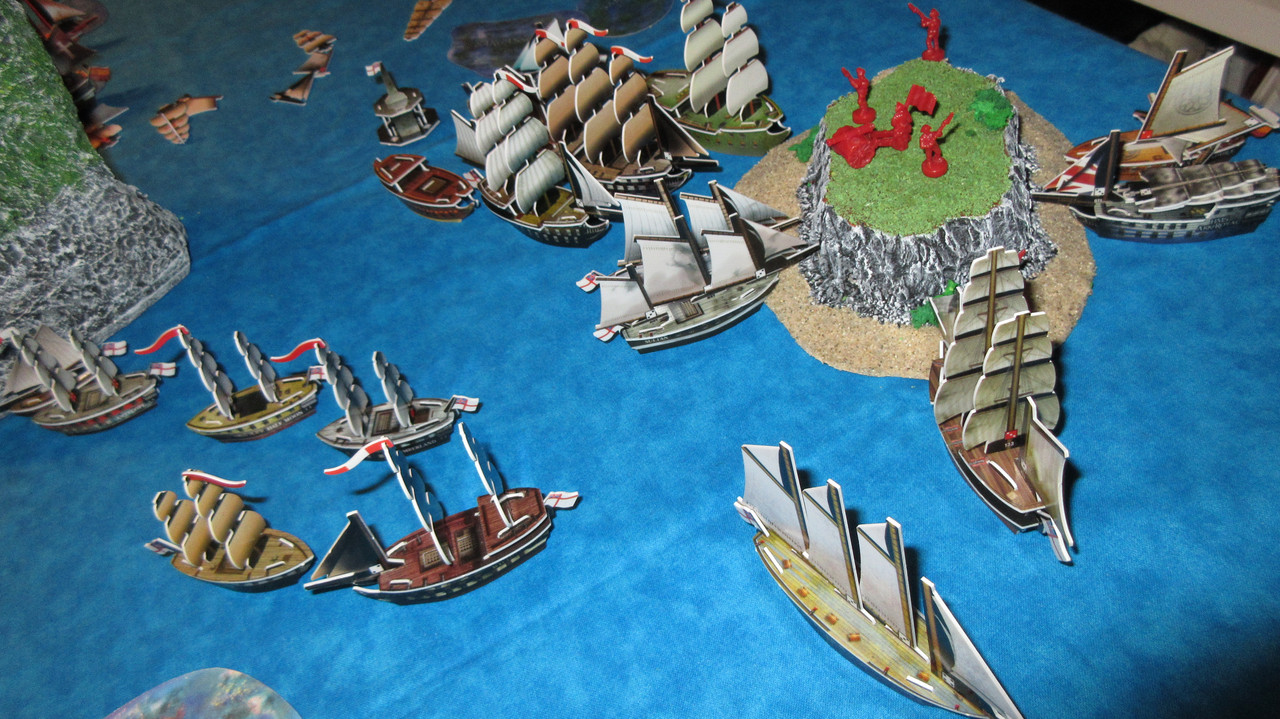 The Spanish take their turn in the combat zone, doing solid damage. The Ebro burns to a crisp, and the Santa Catalina will next turn since she rolled poorly for her fire. However, the Burma and King John are dismasted, with the KJ losing both her crew to the Asesino’s cargo-wrecking ability. The Serpiente hits 2/2 to down the mainmast of the Guy Fawkes. 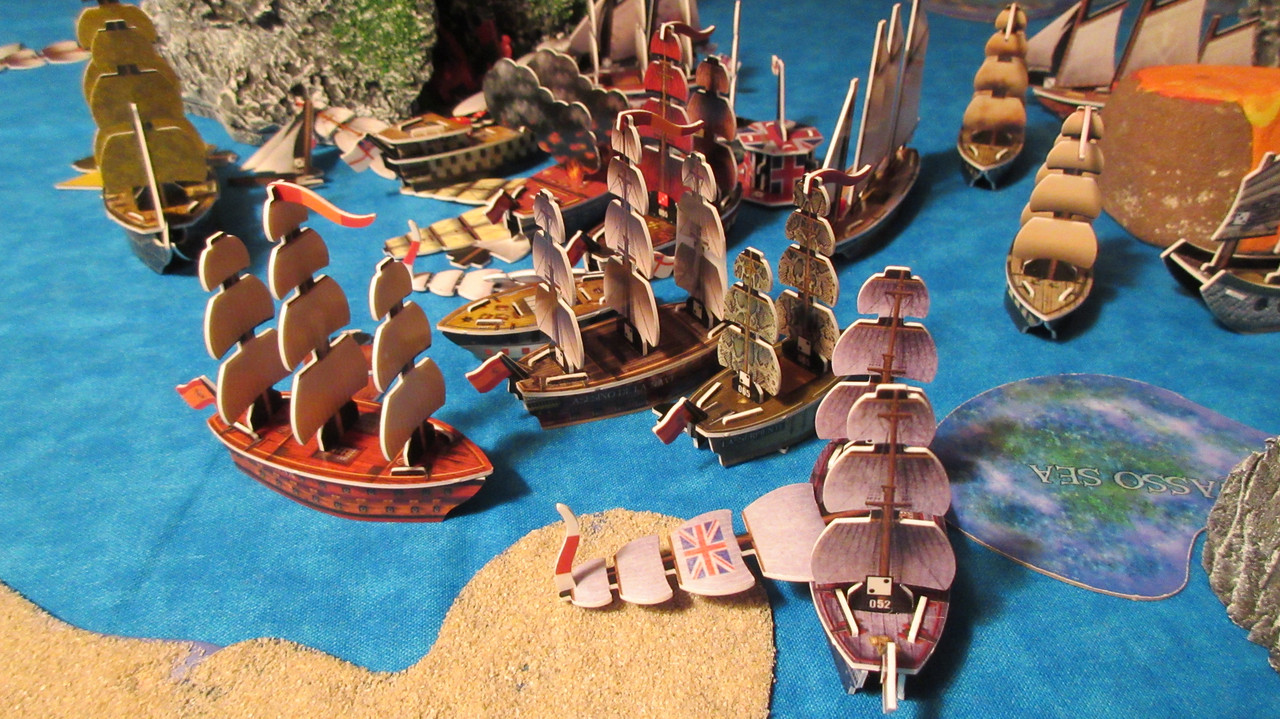 A view from above showing the slow but steady Spanish advance. The battle isn’t as loud or crowded as the First Battle of Diamond Rock, but the engagement is important to keep Spanish morale high after their (debatable) victory at Paradise Island not long ago. 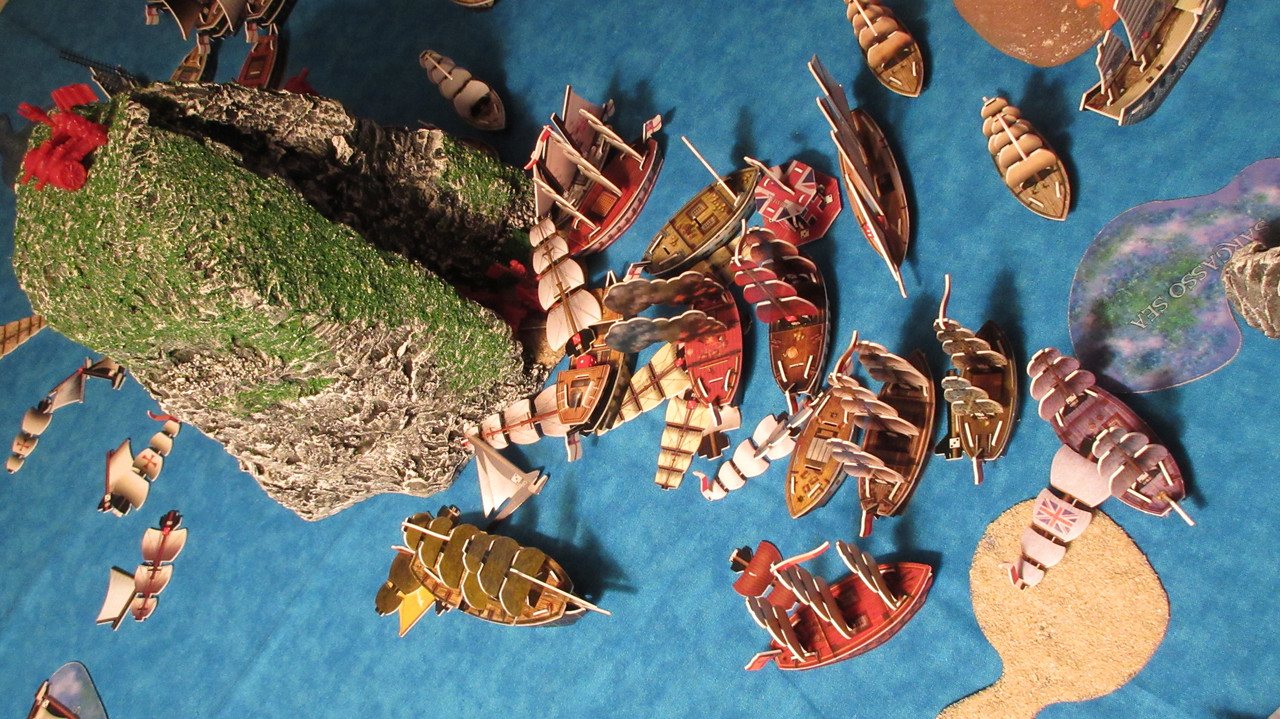 Cashing in textiles, the Spanish launch one of their best ships, the Santo Columba! This ship was my original Spanish flagship, as it was the largest Spanish ship I owned in my original collection of 49 ships “back in the day”. She is well-equipped for war and will likely sail straight to the ongoing battle. 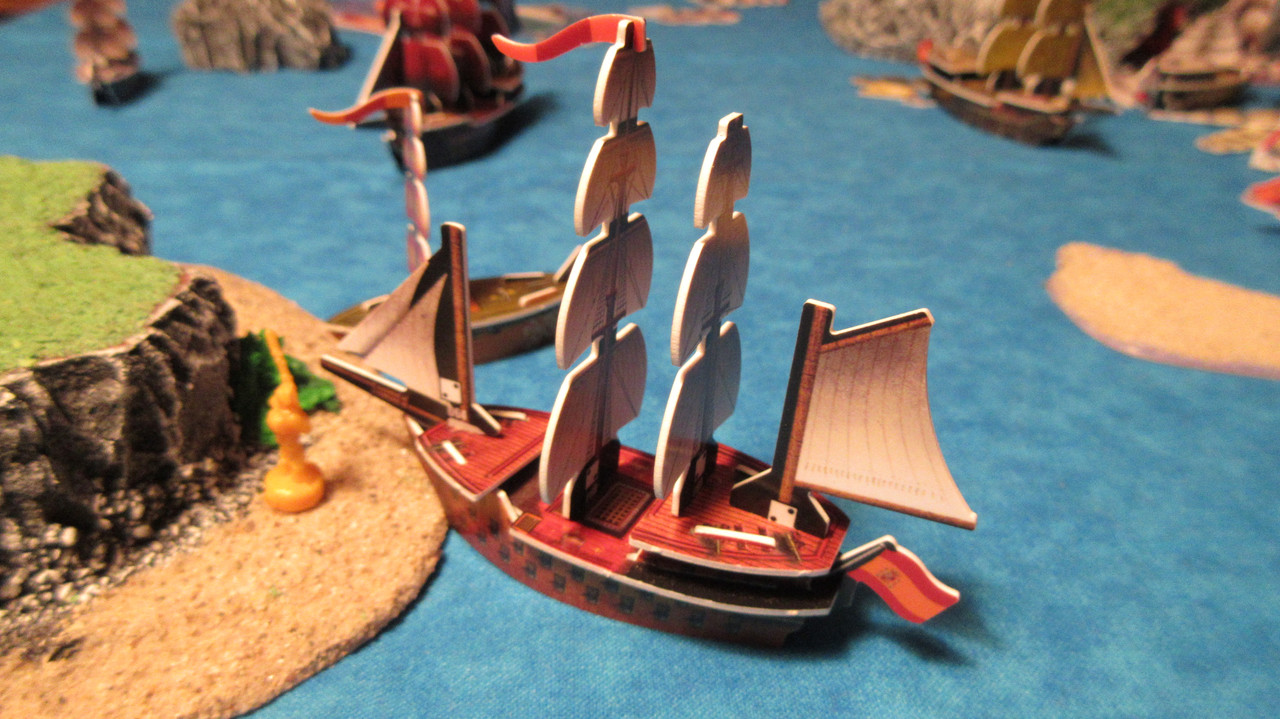 Just like the Santa Ana, the ship is bristling with a powerful broadside. You can see the fine layer of dust just forward of the mainmast – this ship has been in a LOT of battles over the years! 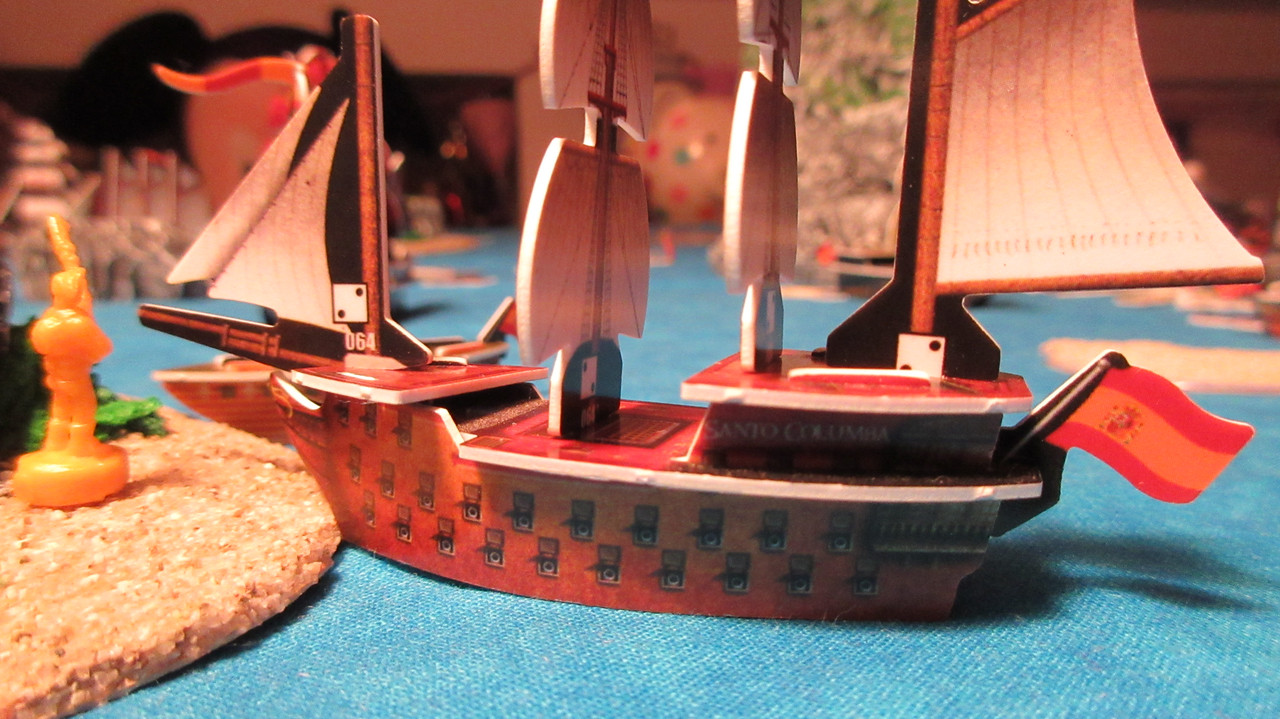 On the Merc turn the Celtic Fury moved west. The French had an easy turn without combat or launches, but it still took me almost 15 minutes to move all of their 60+ ships. The Conquerant succeeded at her first EA roll to move towards the front of the pack. Remember that the French launched considerable amounts of firepower the last two turns and now it is departing from the Harbor. 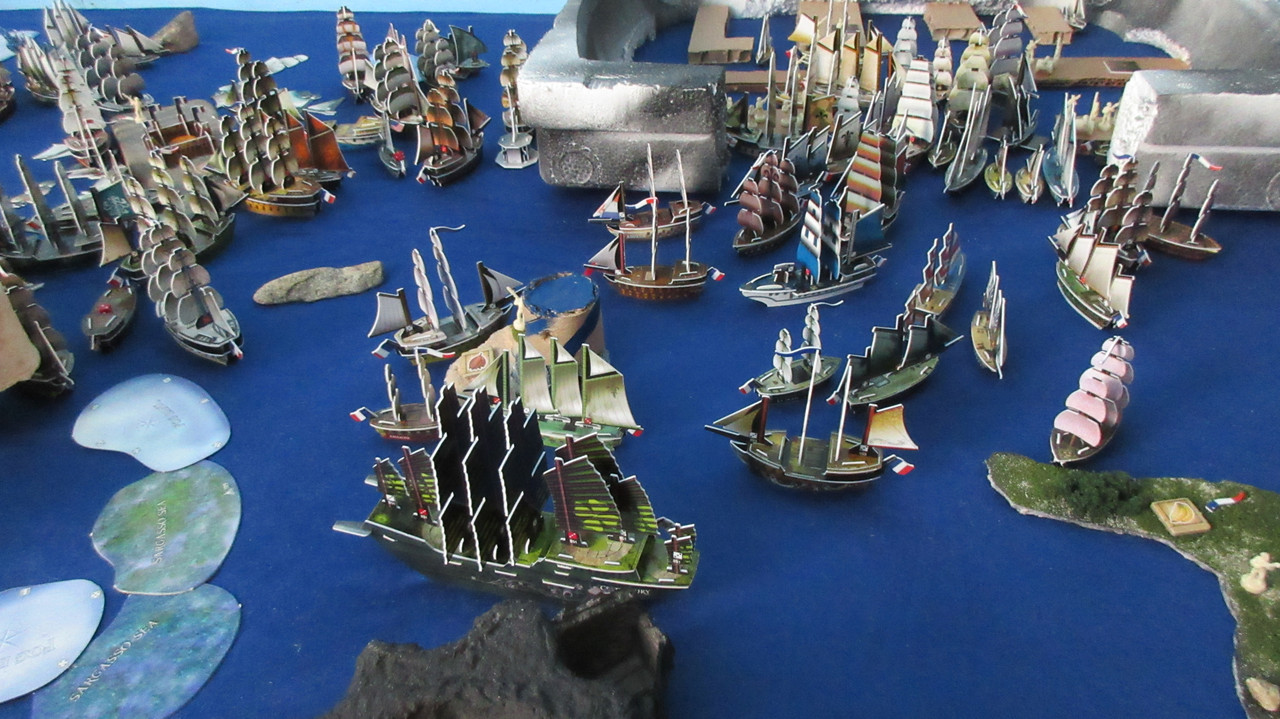 The French discover the Castle!! This occurred when the fog bank the Ville de Paris was in lifted as the ship rolled to come out of the fog right into the outer wall of the castle! The ship’s durability prevented the loss of any masts. 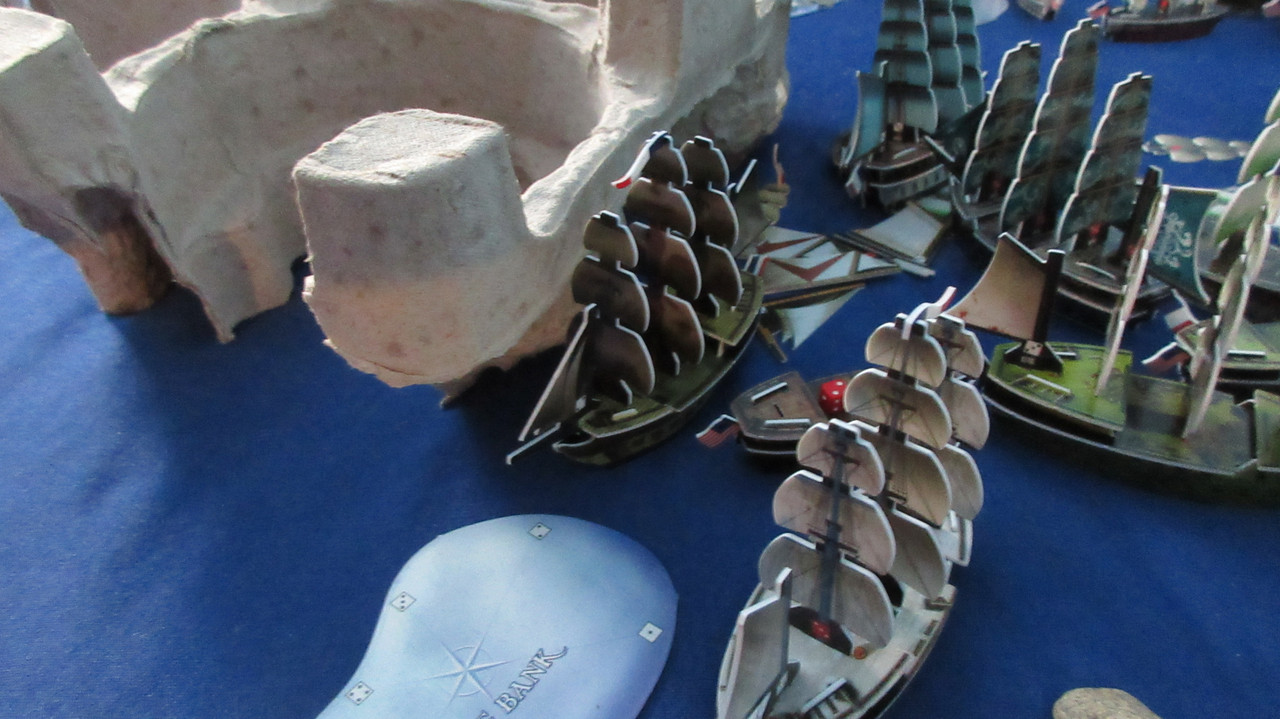 Similar but less complicated than the American situation in the southwest, the French face a towing and repairing dilemma at The Flat. The Dauphin Royal goes to the other end to repair, with the Superbe guarding her against any American foolishness. Other ships dock or attempt to dock at the southern end of the island. The Seattle is captured now that the Hercule has been repaired. 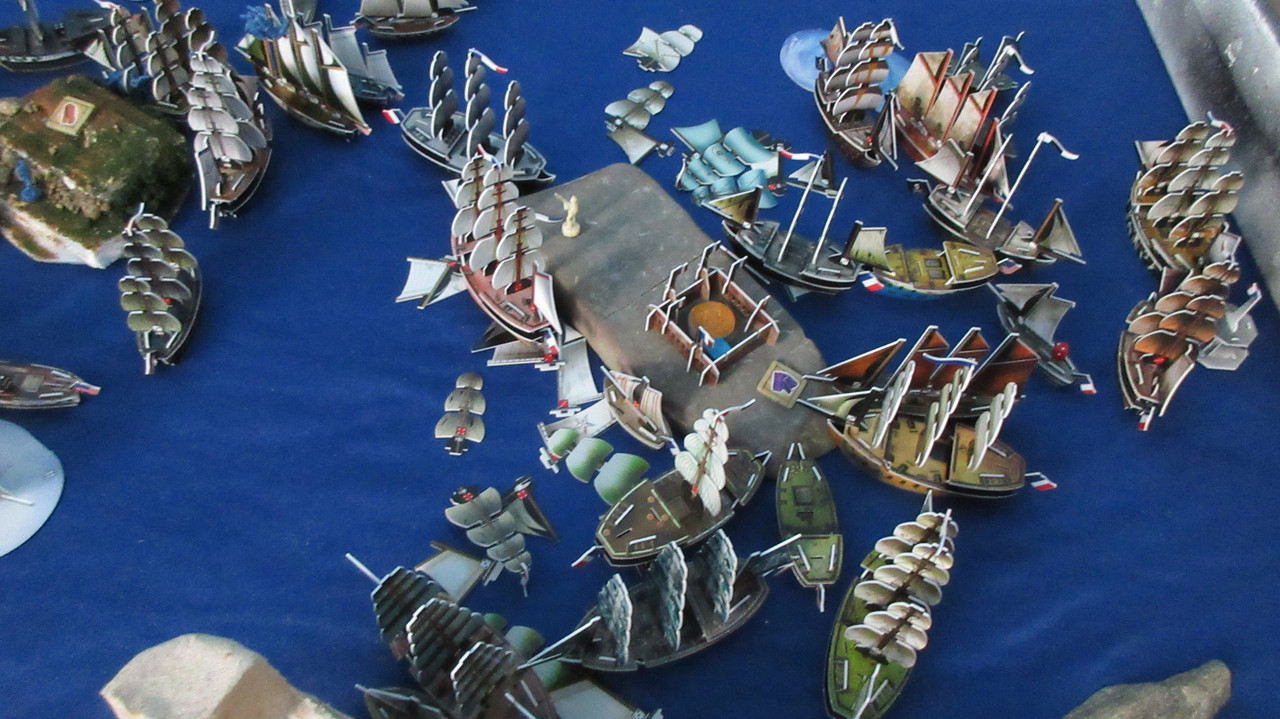 With the biggest fleet in the game almost entirely confined to the western 1/3 of Karkuda following that line of reefs, the Americans continue to face logistical difficulties. At the scene of their battle they are towing derelicts and captures around to get them home. More damaged ships have begun arriving from the fight at The Flat. Preble has finally set sail again, and for now he is guarding the whirlpool with the help of a flotilla. His long-term plans have been put on hold by the big battles and the logistics of the cleanup effort. At the far right, the Brandywine and other ships continue to scout the Castle. 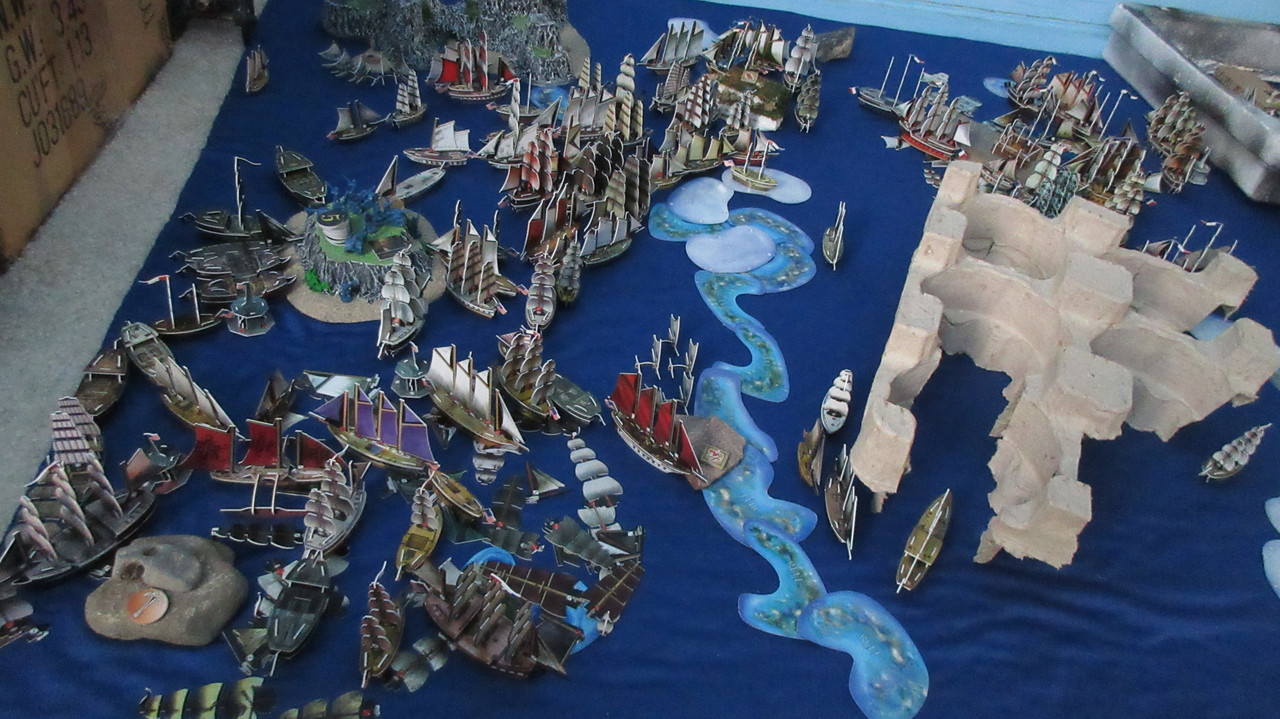 Turn 59 begins with the Pirate whirlpool squadron advancing! With an alliance with the French secured, the Pirates now feel confident about exploring the Sea of Karkuda. The Sunrise Fire uses her ability to explore The Flat, where the Madagascar and Otter may dock next turn to load textiles. 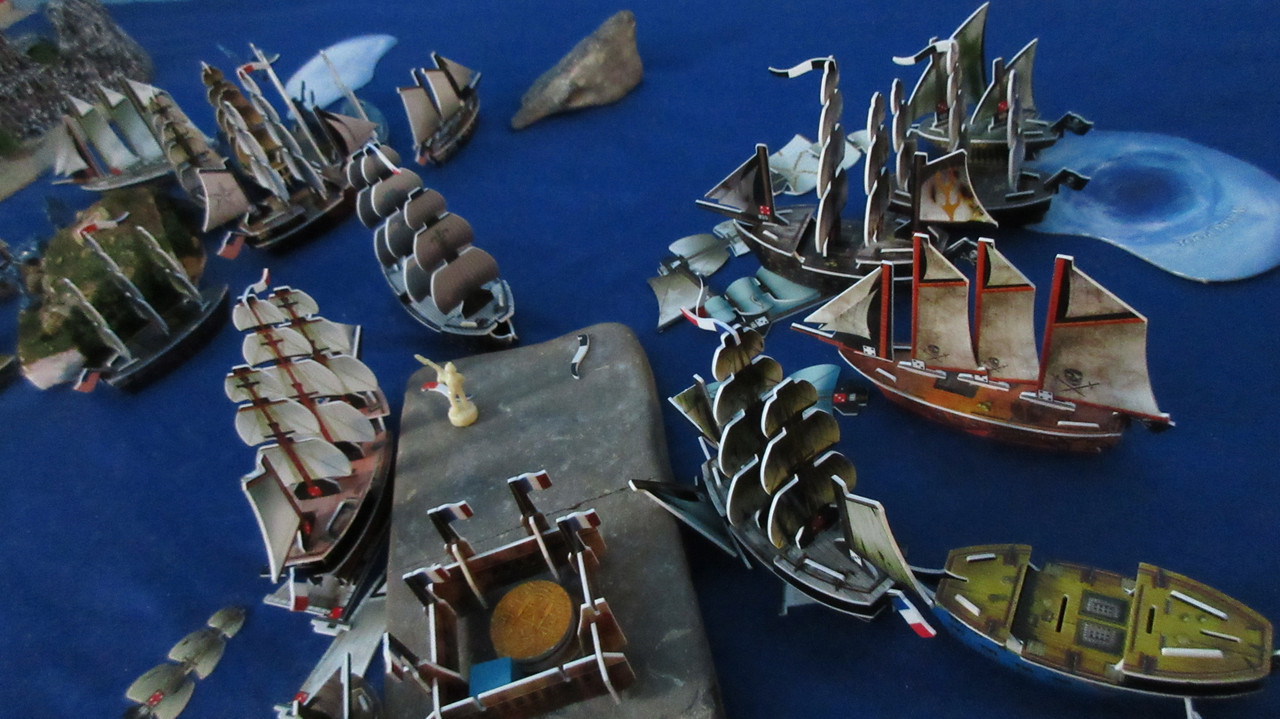 The French inform the captain of the Feathered Hat about their Mercenary ties, a faction the Pirates didn’t previously know about. The FH sails south to greet O’Brien on the Celtic Fury. 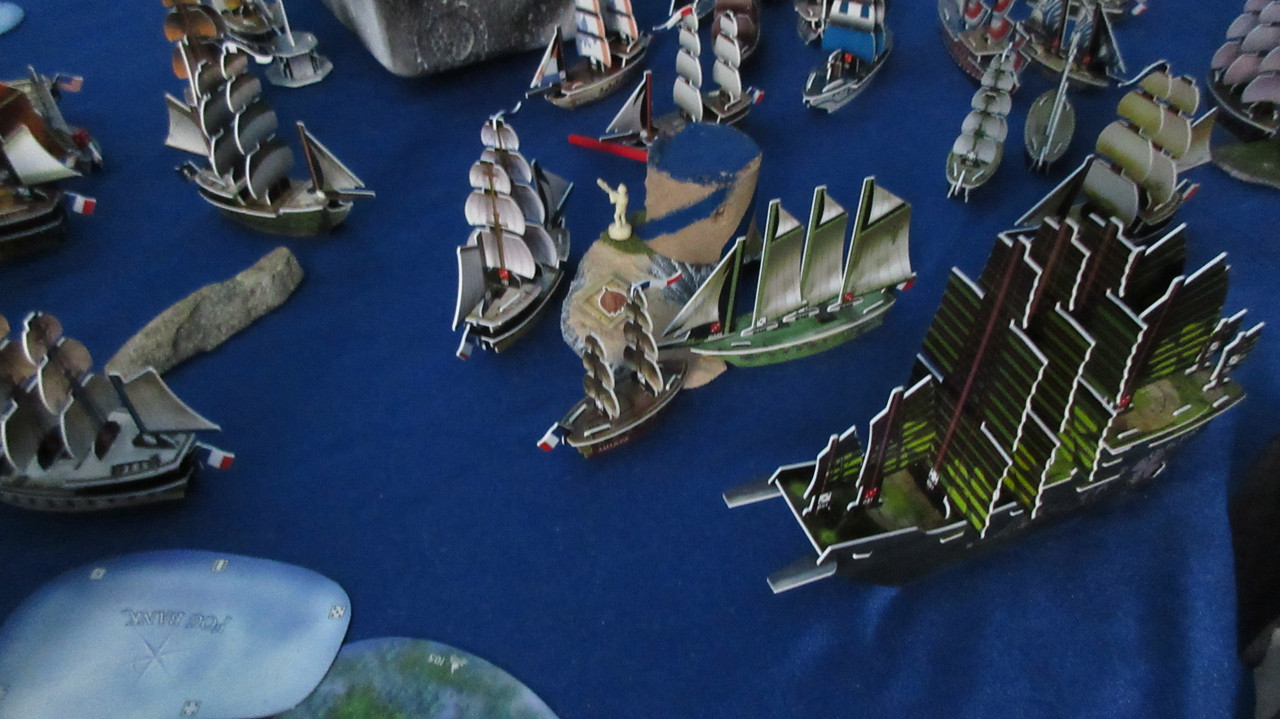 Potential problems for the English in the Caribbean! Blackbeard is here! Returning to one of his old real-life stomping grounds, the feared pirate arrives in the Caribbean. 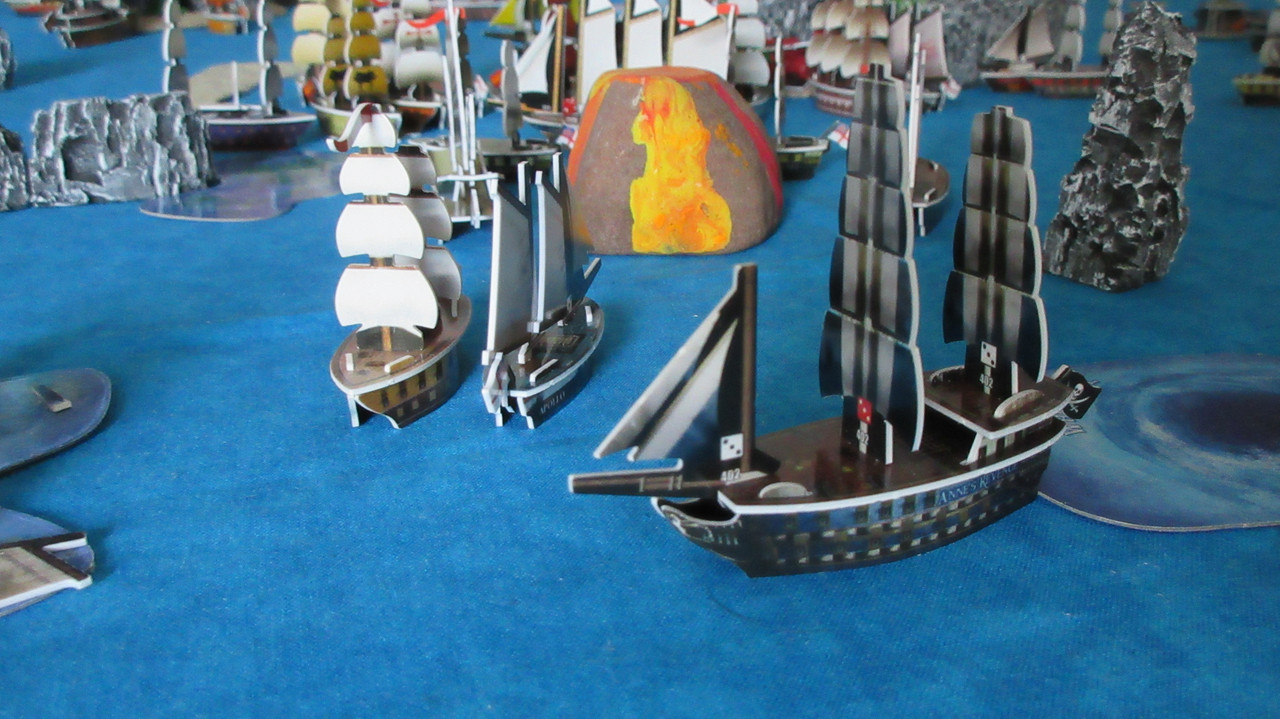 Using Lady Baptiste’s reroll for Sean Gallows’ EA, the Queen Anne’s Revenge rams HMS Apollo! Shots are fired into the hull of the poor English ship, with two finding their mark to fell a mast.Blackbeard commands a boarding party and wins to capture the English captain!! 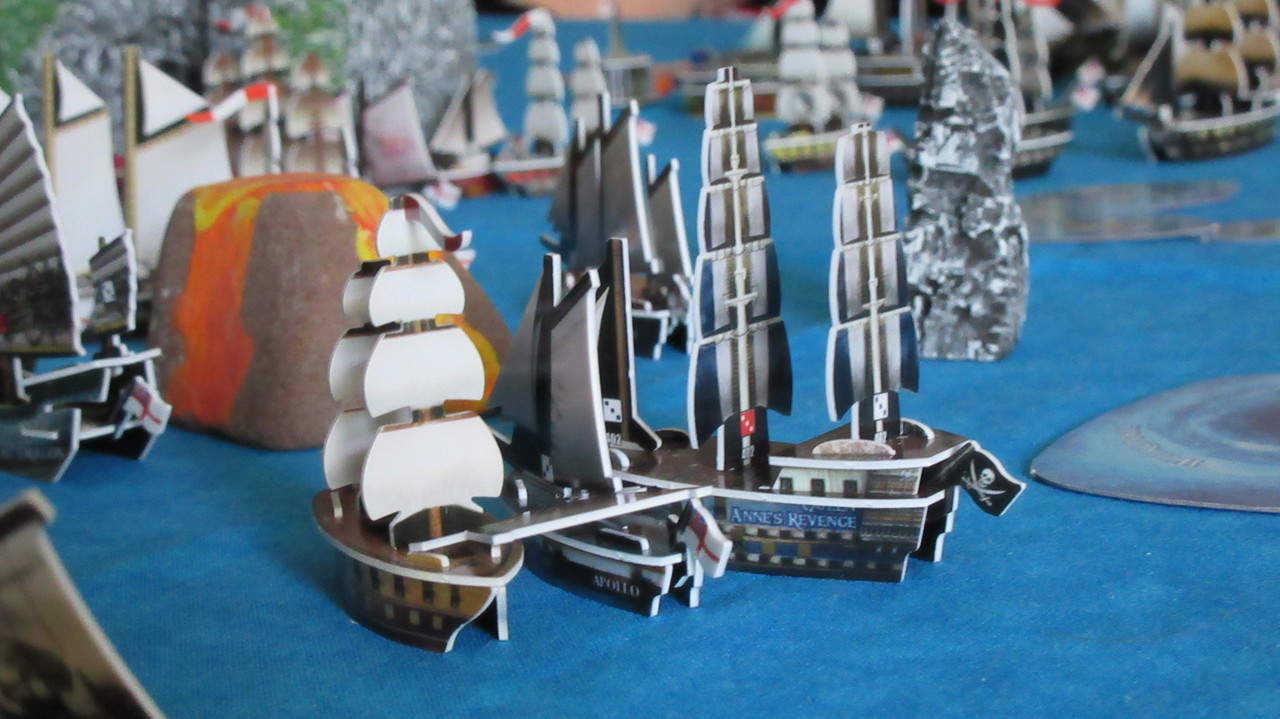 Back to the Sea of Allost!

The transfer is complete!! The Silver Dagger gave a ladder to the Revenant, and Calico Cat used an EA to hoist it up high in the air from the mainmast! The Pirates are experimenting with the Tunnel, trying to reach the ceiling of it with ladders. Now it becomes obvious why the Silver Dagger was launched with 3 ladders aboard: Mission intends to carry out some operations at the Tunnel. The Revenant was chosen since her mainmast reaches higher in the air than the masts of smaller ships like the Silver Dagger and Mission’s own Crusher. However, the height is still not enough to reach the ceiling of the Tunnel. 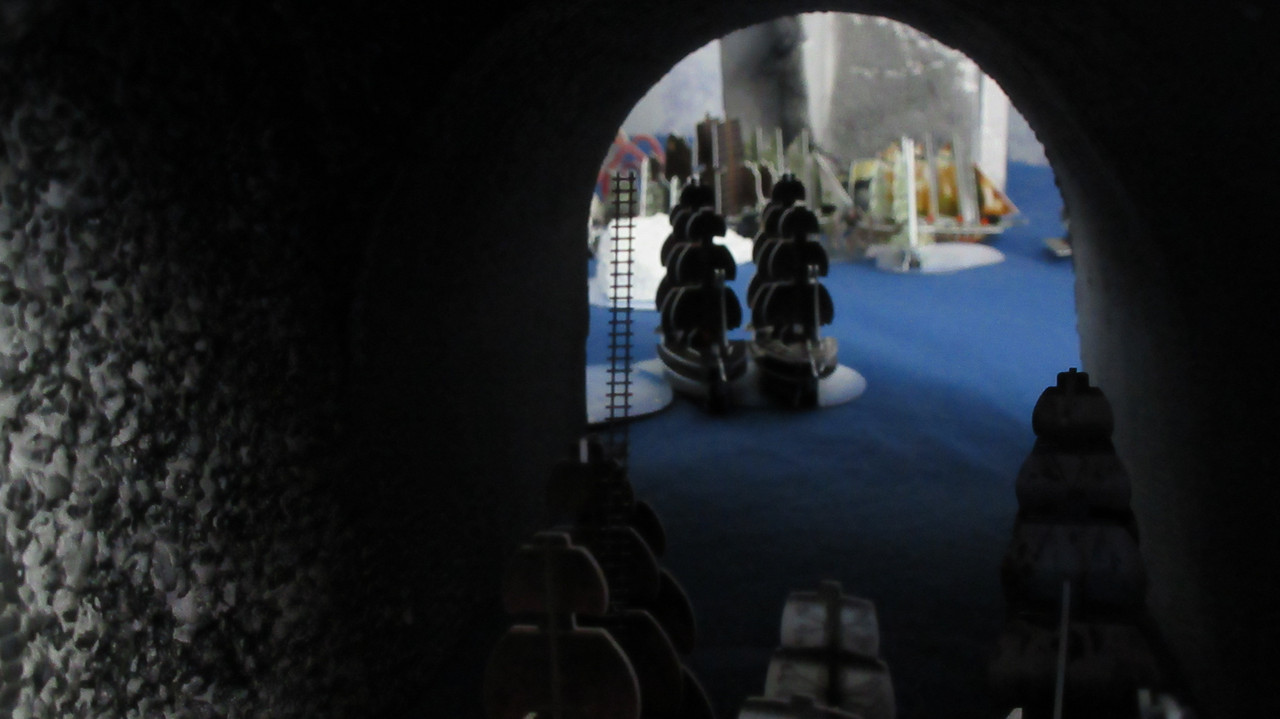 The Silver Dagger tries the same thing with one of her ladders. Men clamber up to the top, but are unable to do anything with the steep and curved sides of the Tunnel. It may be possible to hang from the top if a hook is affixed to the ceiling in the middle, but the curved sides leading there are too difficult to use, while the men on the ladder from the Revenant cannot reach the wide ceiling part. Much to the Pirates’ dismay, it seems that neither option will work. 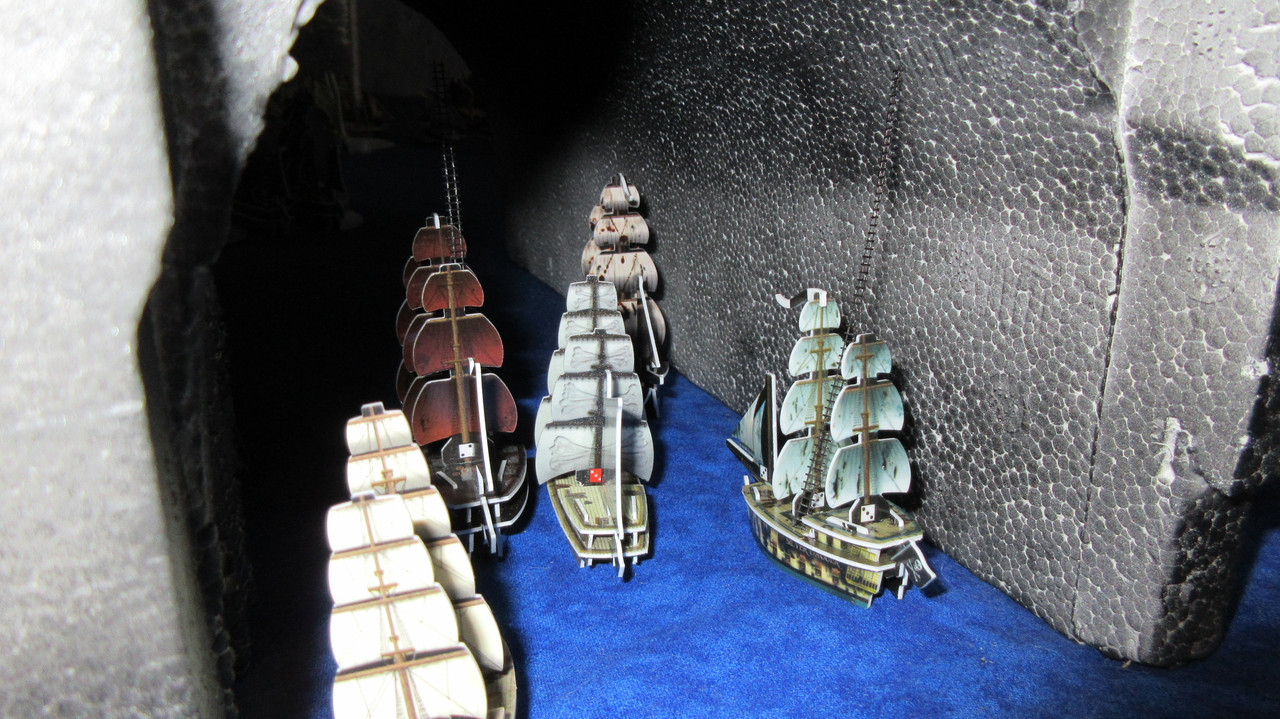 Bartholomew Roberts and Captain Mission watch from their shorter ships as Calico Cat and Griffin aboard the Revenant become frustrated. 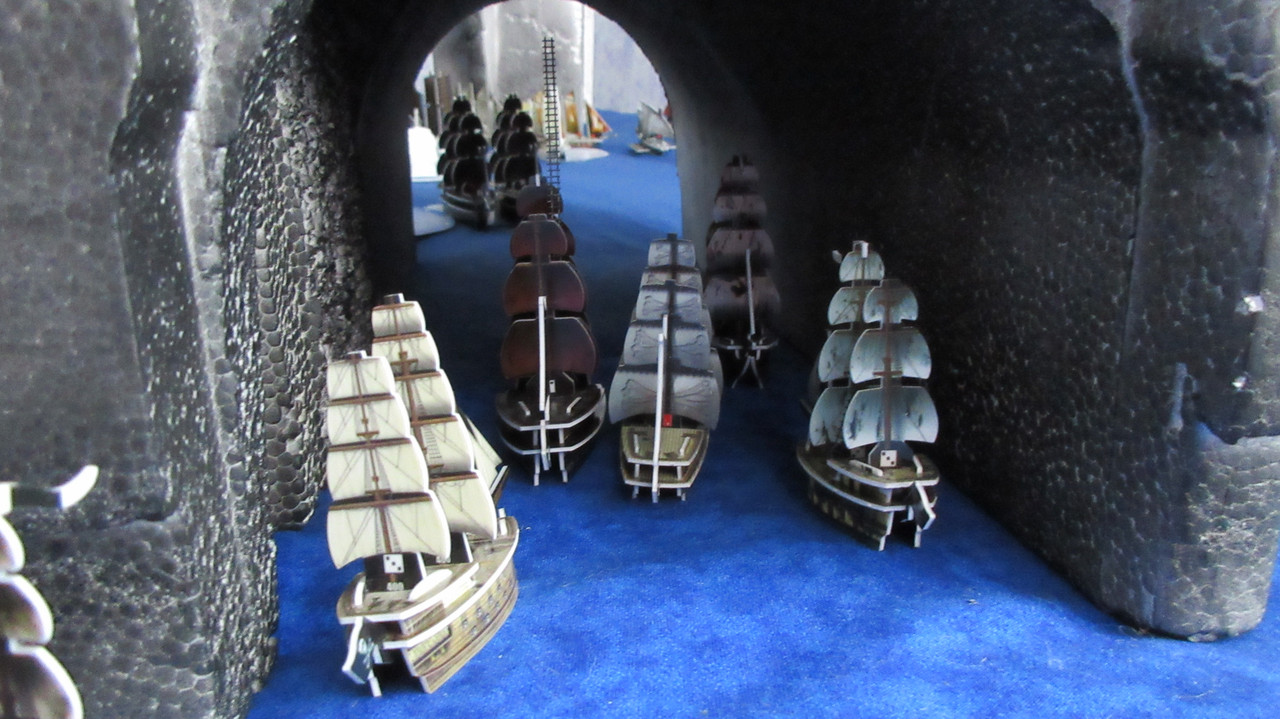 Here you can see that it really is a high Tunnel, with the height exceeding the height of two main masts of a 5 master stacked on top of each other. 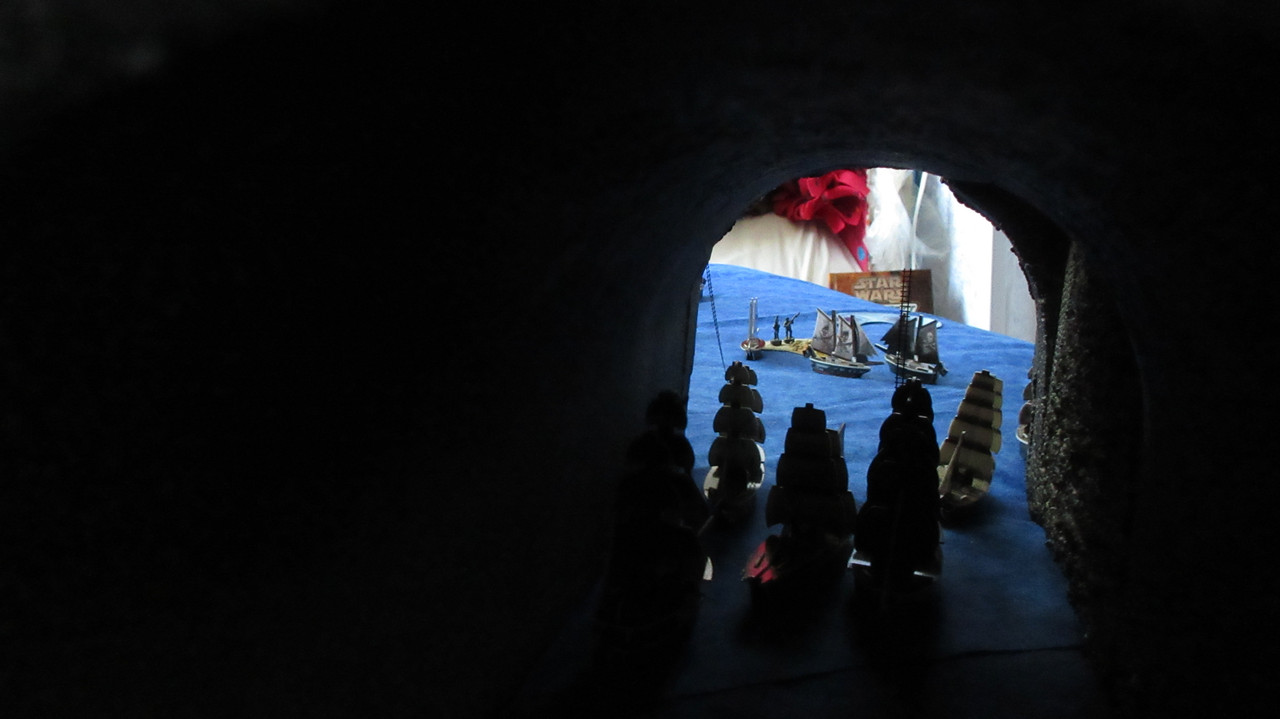 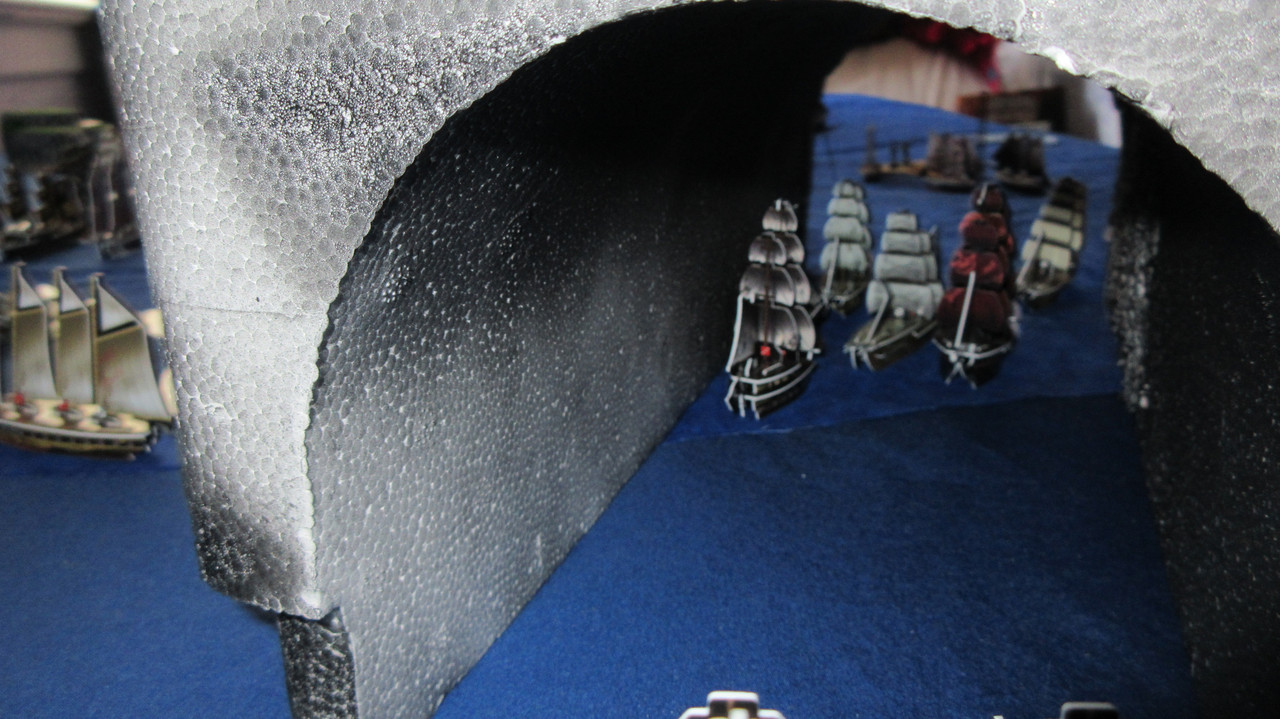 Long shadows in the Tunnel, where the Pirates have been stopped by nature: 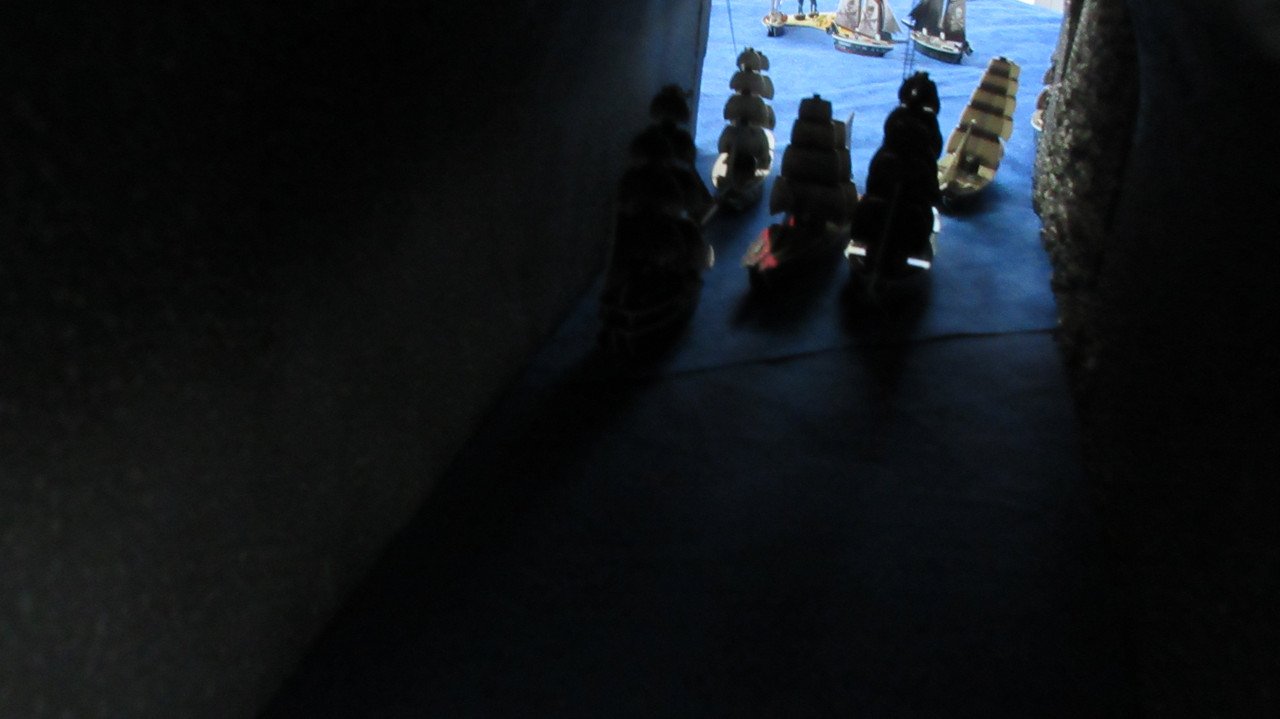 The Pirates don’t know it yet, but thanks to Shal-Bala and the Eye, we know what lies above! XD 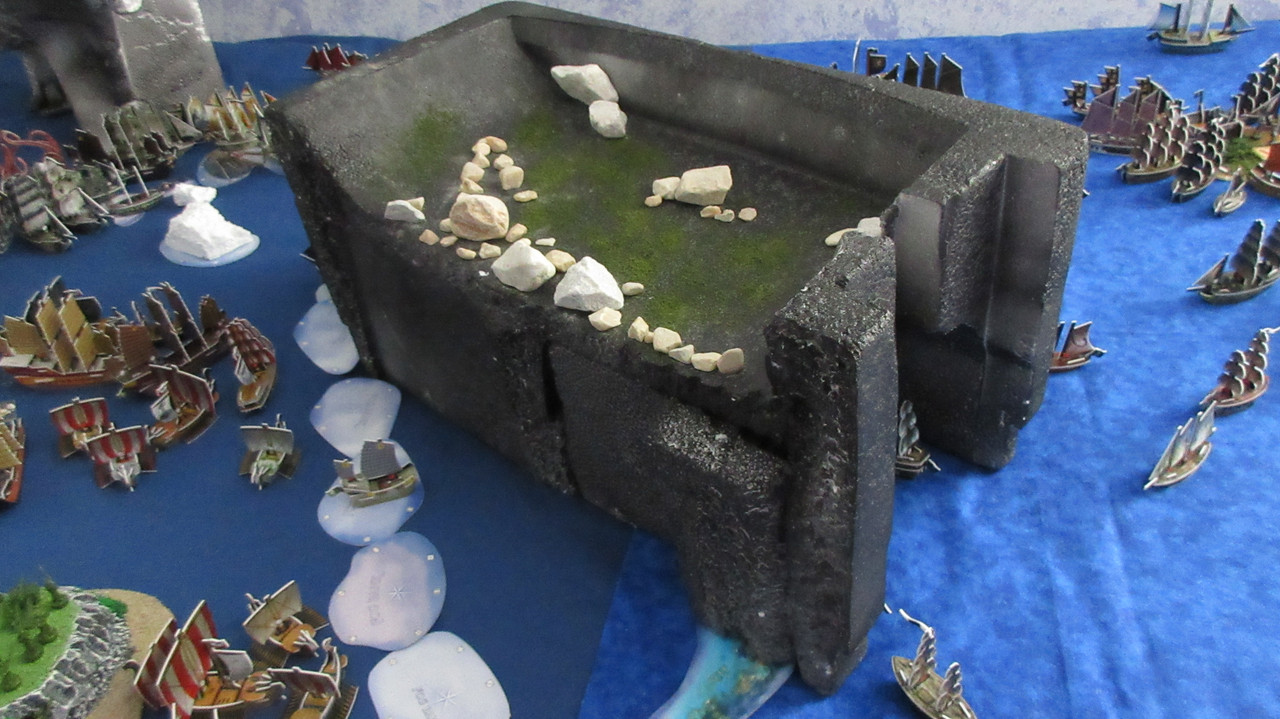 The Pirates continue to get metals from Pistol Island, with their southern whirlpool looking as deserted as ever. The Deliverance may join back up with the whirlpool squadron now that Havana Black has replenished his stores of sacrificial oarsmen. 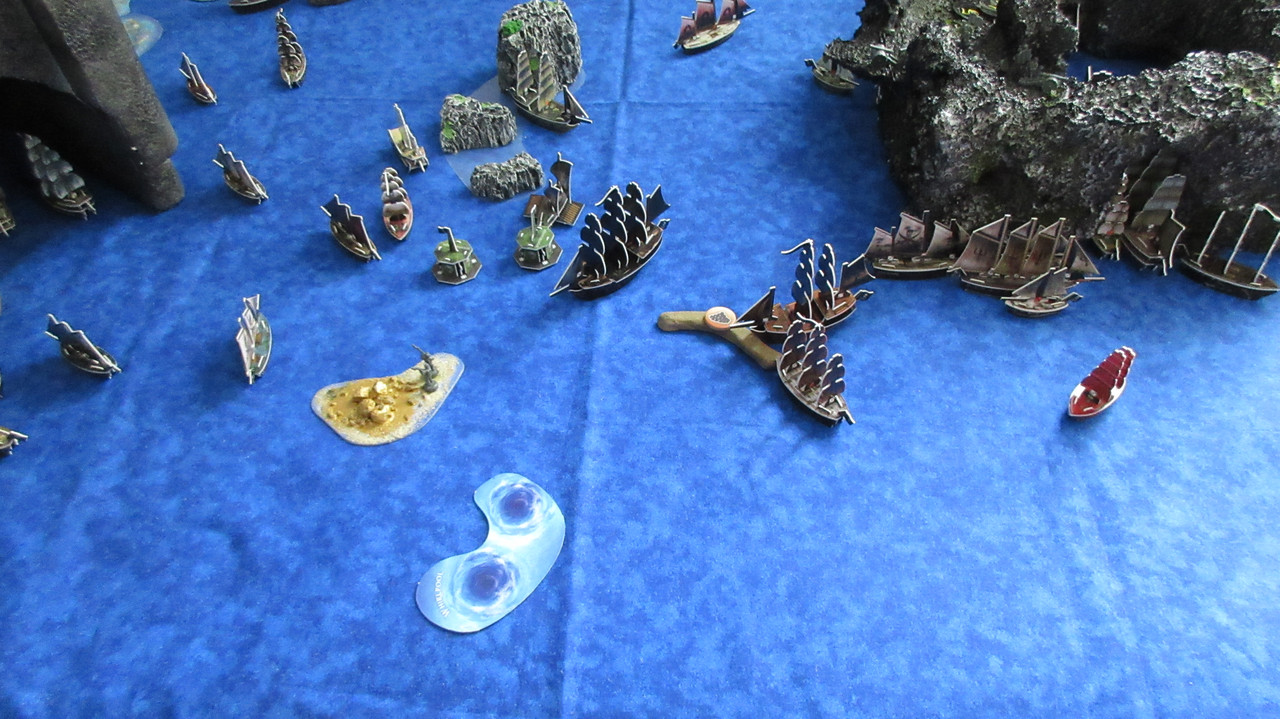 Up north, Captain Villanueva was puzzled why the Pirates hadn’t explored the Sultan shipwreck near the other whirlpool. Taking his ship over the reef, he quickly discovers why, with the Rum Runner losing a mast. The 5 Pirate gunships launched last turn will join the HI raiders at the whirlpool where they await further orders. The Pirates are considering another assault on the Americans, but they are understandably nervous that it will go as badly as the last attack. In addition, the Feathered Hat was going to come back through a whirlpool to inform the Pirates at home of the new alliance with the French, but the FH’s captain is off to meet O’Brien instead. With no ships from the whirlpool squadron returning yet, Mission himself and the other Pirates in the Sea of Allost are unaware of the alliance, which could prove very helpful if the Pirates combine a squadron with the French ships near The Flat, or coordinate a pincer strike from both Karkuda whirlpools.

The Pirates also launch three ships from Dead Man’s Point: the Kirbac and Venture are cheap gunships for home defense, while the Revenge will be the first ship to load lumber from that island! The Revenge is a nice option for cheap firepower as well, but with three cargo spaces open with a helmsman aboard, the Pirates are looking to use her ability (move S after unloading cargo) to help in their resource efforts. That ability will allow the ship to get a bit of a jump back out of the kingdom, which may help to not clog the entrances as much. 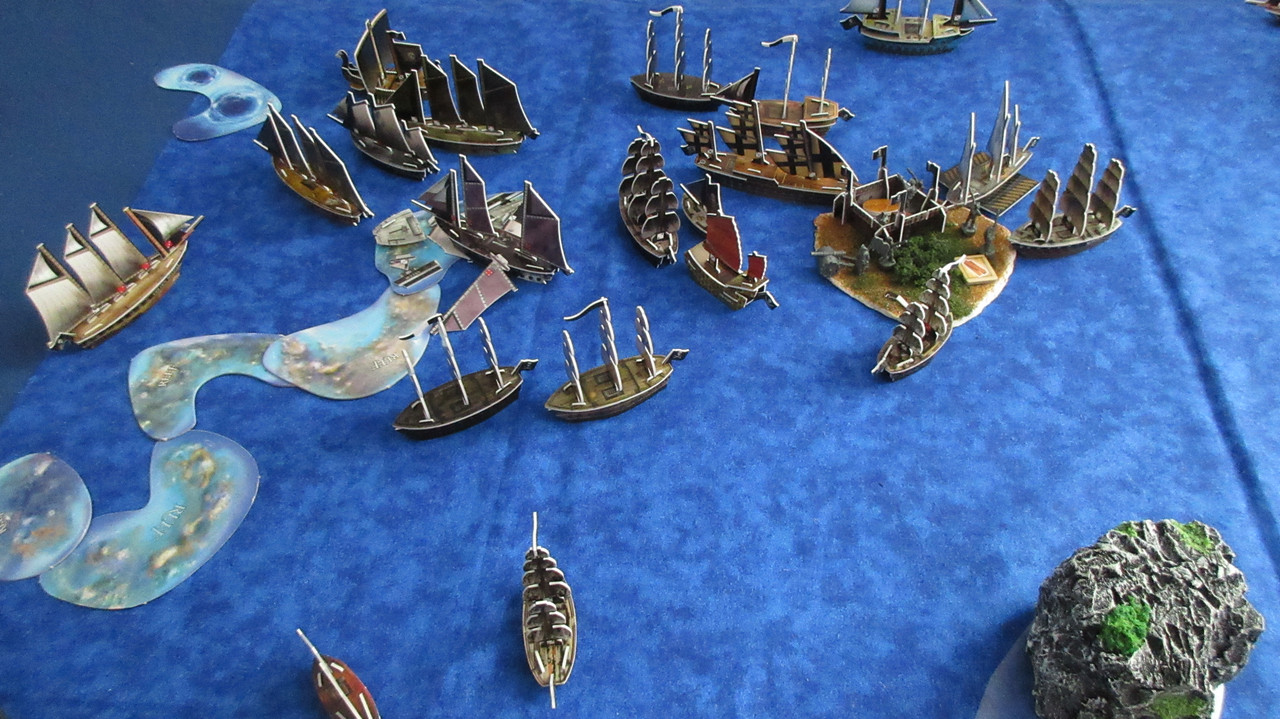 The Jades and Cursed had uneventful turns, with both sides continuing to wait and wait until their next battle erupts. However, although the Jades still have “tunnel vision” (pun intended) on the Cursed, the Cursed are now more indecisive and hesitant than ever. Seeing everything in play with the Eye has led them to become scattered in their thoughts, as they have so many more options. With three factions currently larger than them (Pirates, Americans, French), the Cursed are worried that continual war with the Jade Rebellion will wear away and diminish any chance of them winning the game overall. It does appear that some Cursed gunships are headed east around the fog banks instead of gathering at the entrance to the Roost. At the far right, the Sea Crane and Naegling are in fog banks due to Tsuro and Tabby (McWarren), as the Cursed L-movers have been pretty effective the last few turns. Unfortunately for the Cursed there aren’t many reefs nearby to toss ships onto. Also, somehow I haven’t even mentioned this yet, but I’m using the version of flat earth where ships cannot be moved off the ocean and removed from play. This is partly because thematically there is “more out there” beyond the boundaries (recall the Jades and Americans arriving in the oceans rather than starting at a HI), and because with so many HI’s right next to the edges, I don’t want the Cursed to have another advantage by moving newly launched ships straight out of play. Plus the Cursed already have house rules working in their favor, and now they have the Eye as well. 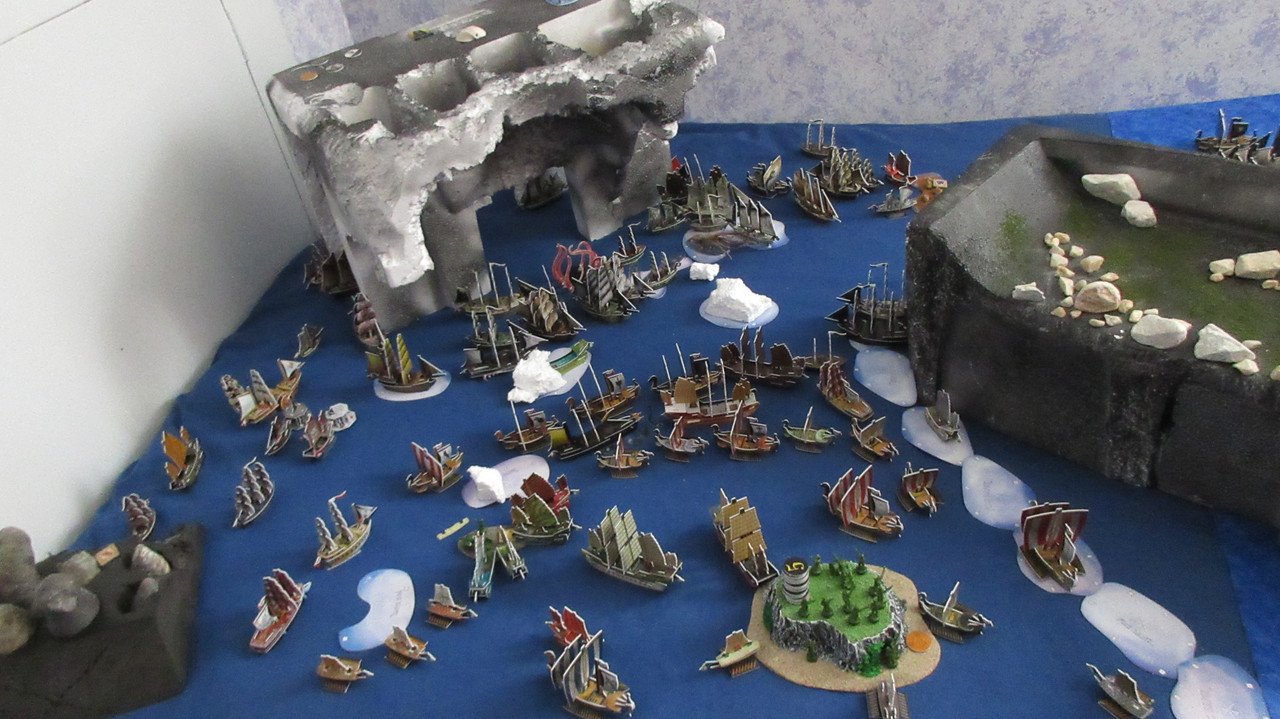 The Jades launched the Yggdrasil at the end of their turn and the Cursed cashed in a few textiles to complete the crew complement of the Executioner.

Things are a bit dormant right now, but who knows what will happen next? Stay tuned!