Just played a game with Repkosai using Cadet-Captain Mike’s random setup tables! Repkosai made the rolls to avoid my bad luck giving us a more boring setup. He rolled a 5-4-6, which gave us: “Free ships totalling 8 masts; One generic crew on each ship, plus two generic crew & one named crew (all free)”.

With that, it was clear that you could afford many of the lesser used small ships with high point costs.

Round earth rules. I made sure to include various UT’s, including some wacky and potentially game-changing ones! 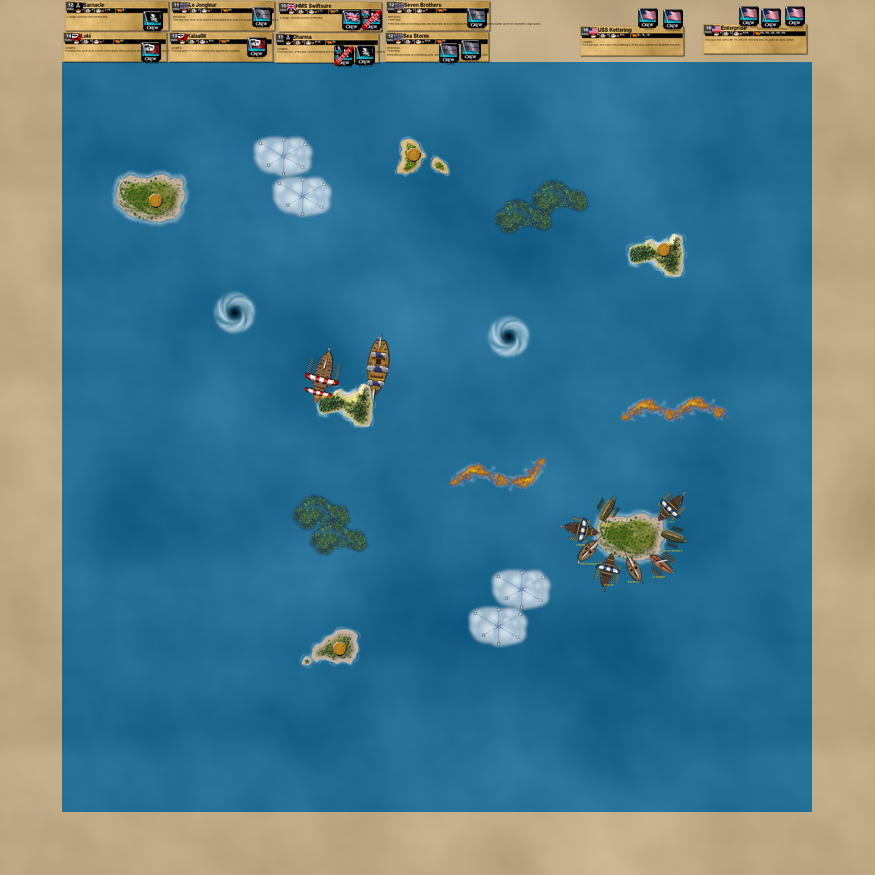 The Americans head northwest, while the mixed fleet immediately scatters. My strategy was to raid the American HI with the Loki and Jongleur after the Enterprise docked home. The Sea Storm was a suicidal pest, while the Dharma and Swiftsure were more tactical gunships (especially the Dharma, with Bonny Peel potentially being a nice surprise between the named crew in the opposing fleet and the Longship’s +1 boarding bonus). The KL was a hybrid, but ran gold at the start. The Seven Brothers and Barnacle were the most direct gold runners, and I wanted the Barnacle to find at least one of the UT’s I dumped in… 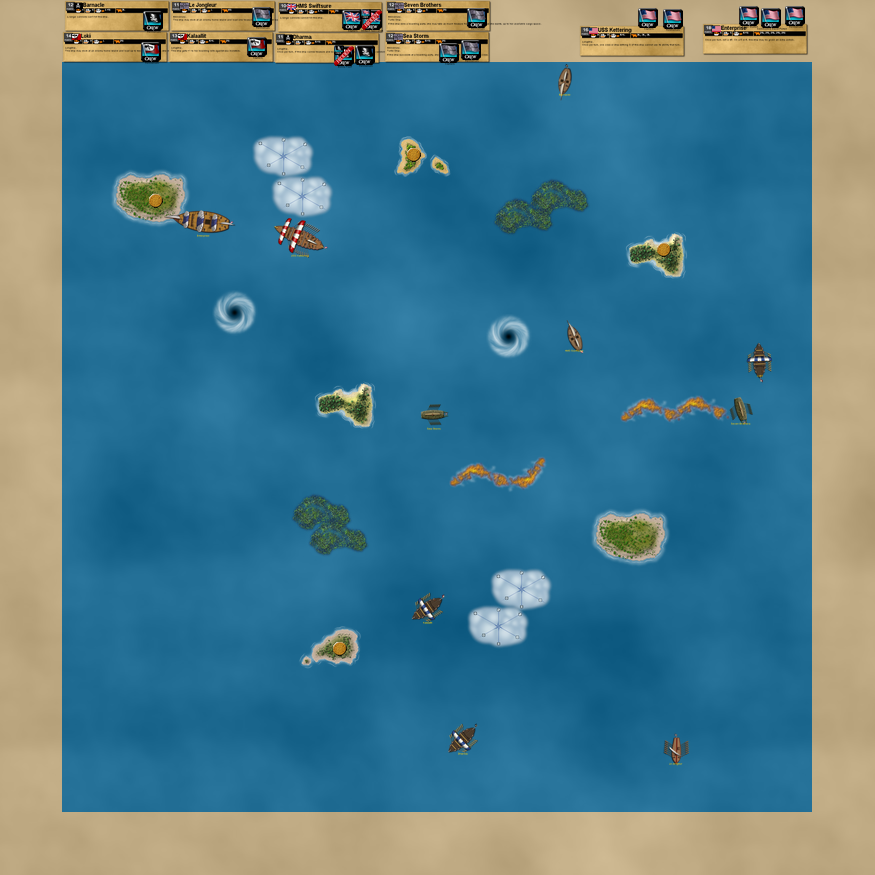 In an annoying circumstance for both sides, the Enterprise picked up Enemy of the State! Not only could the Americans not unload her gold, but the mixed fleet couldn’t steal it via HI raiding! At the extreme south and east of the sea, the Dharma and Loki look to round earth and surprise the Americans. The Swiftsure and Sea Storm watch the Kettering, almost as eager to stay out of range as they are to pounce. 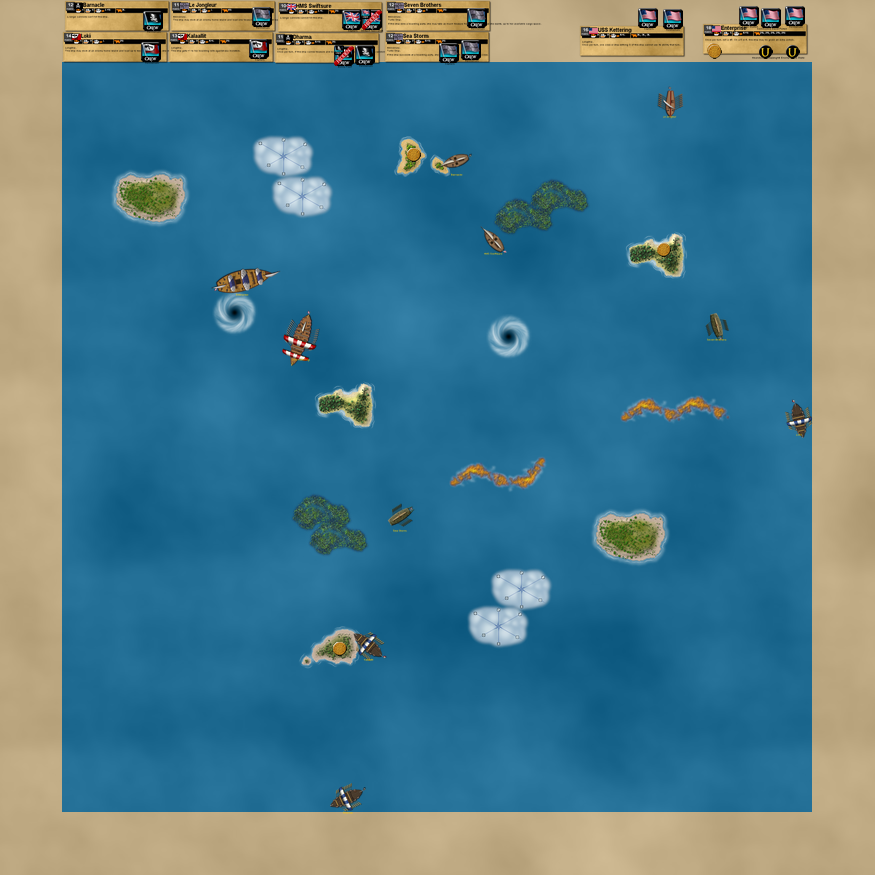 In the south, the KL finds Ammunition and Driftwood. In the north, the Barnacle finds a UT and some good gold, along with the Dead Man’s Chest UT. The DMC was included since the unique setup rules allowed me various free generic crew. I purposely included only 1’s for regular coins, in order to maximize my personal benefit if the DMC was used properly. With 3 of the islands explored and only one left, the Swiftsure knows what she must do…. 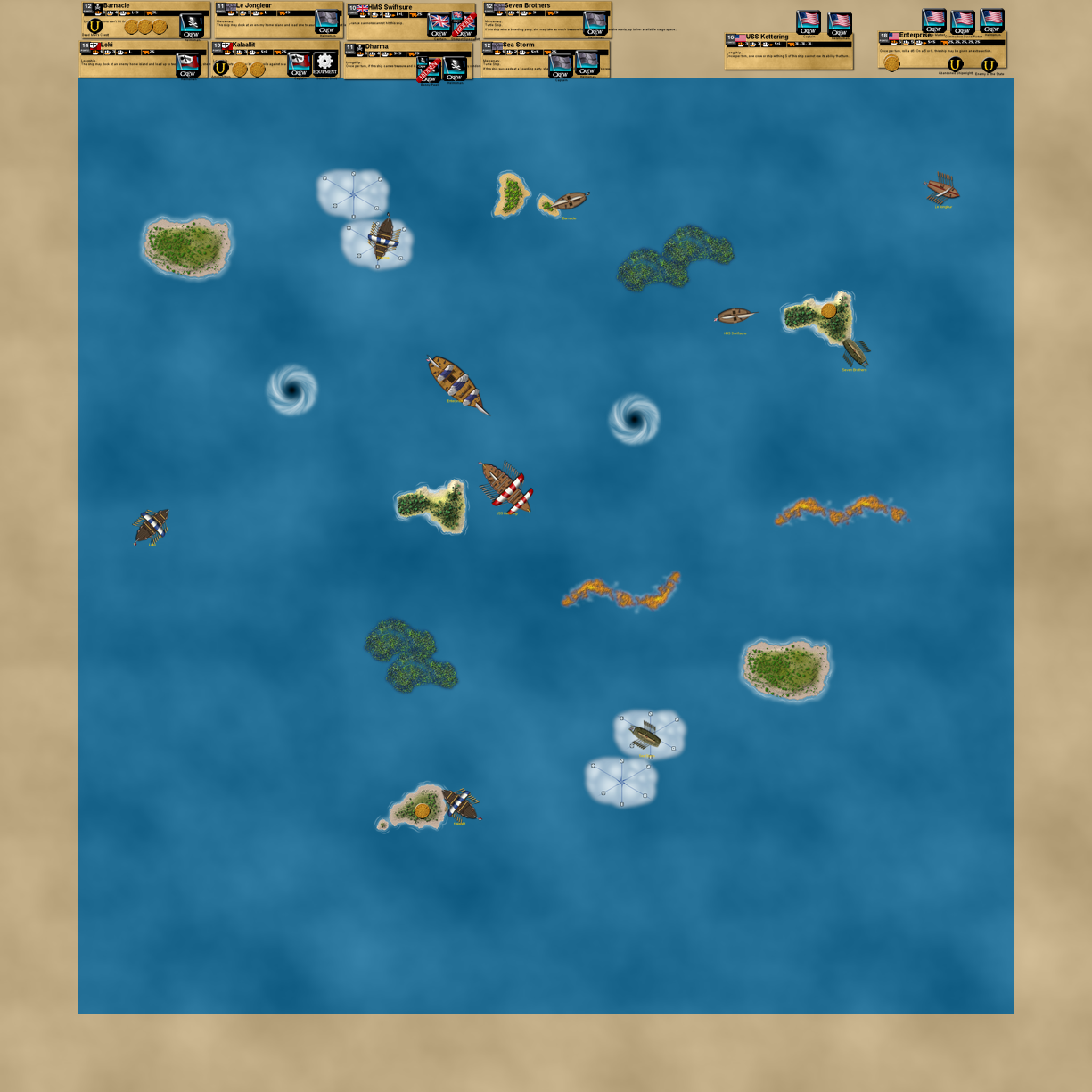 With the Enterprise unable to dock, the Americans headed northeast to try and eliminate the Dead Man’s Chest UT from the Barnacle. I made a comment about blowing the game up, but little did the Americans know, I meant it literally! In what looked like a bizarre and suicidal move, the gold-laden Barnacle rammed the huge and powerful Enterprise! The other UT the Barnacle had found was… Explosives! I rolled a lucky 6 and both the Barnacle and Enterprise were blown up!! Luckily the Enterprise had found some Driftwood of her own (separate from that on the KL), which saved Porter, who grabbed onto a log just in time for the explosion to simply throw him to a nearby wild island.

However, this was just the beginning of my nefarious plans, as the Seven Brothers finally explored her island to find another crazy UT: PLAGUE! The Swiftsure had the fastest base move in my fleet, and immediately zoomed up to the SB and grabbed the Plague. This eliminated the Swiftsure’s captain and stinkpot specialist, but the Plague was more valuable in deterring the Kettering from interfering with the endgame, which was approaching quite rapidly. As for my other ships, the KL is headed home with gold, the Jongleur looks to grab some gold from the SB so she’s not trucking it home at just S speed, the Dharma is unable to attempt crew captures from the Kettering due to bad fog rolls, the Sea Storm heads north again to provide bait for the Kettering, and with no gold on the American HI available for stealing, the Loki looks to pick up a coin left over from the KL’s haul. 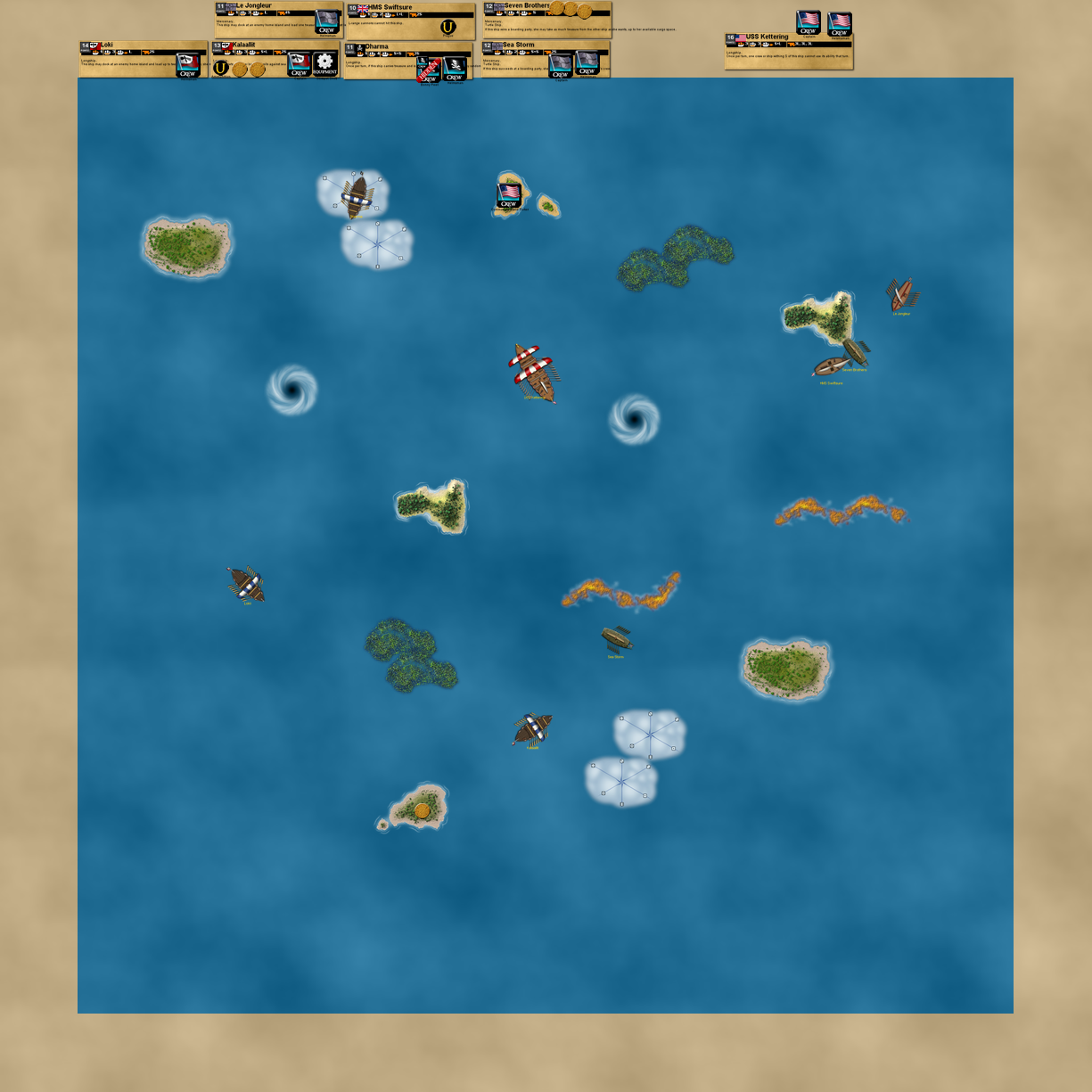 The Kettering loaded Porter aboard, and the Sea Storm let herself sink so the Swiftsure could ram the Kettering and unload the Plague to kill all the American crew. (the Kettering wouldn’t have caught the KL in time anyway, who was busy unloading gold from the Mercenary ship Jongleur) The Dharma eventually got in on the action against the Kettering, but soon it was evident that the mixed fleet had prevailed. In a very strange setup, the mixed fleet had won 13-0.

This is a great example of what happens in Pirates – just as Gore Verbinski said, “everything that can go wrong will go wrong”. Not a single strategy in either fleet worked properly. The Enterprise wasn’t able to run gold or fight, and was simply blown up without firing a shot. The Kettering managed to do some damage late in the game, but to no avail. My fleet wasn’t able to steal gold from the American HI, capture crew with Bonny Peel, or use many of the ships as intended.

It was a fun game, though lopsided as I tried to exploit the setup rules as much as possible, going with the maximum number of ships and generic crew. I believe my fleet totalled 126 points against just 53 for Repkosai, which is one of the only flaws of the random setup tables. However, we both enjoyed the game and hope to use the tables again in the future!

Just played a 20 Point Game game of Water World on VASSAL with repkosai!

Each of us controlled 2 fleets that would be played independently of one another. The build total was a small but exciting 20 points!

The order of play: (all game pieces found in the Master Spreadsheet) 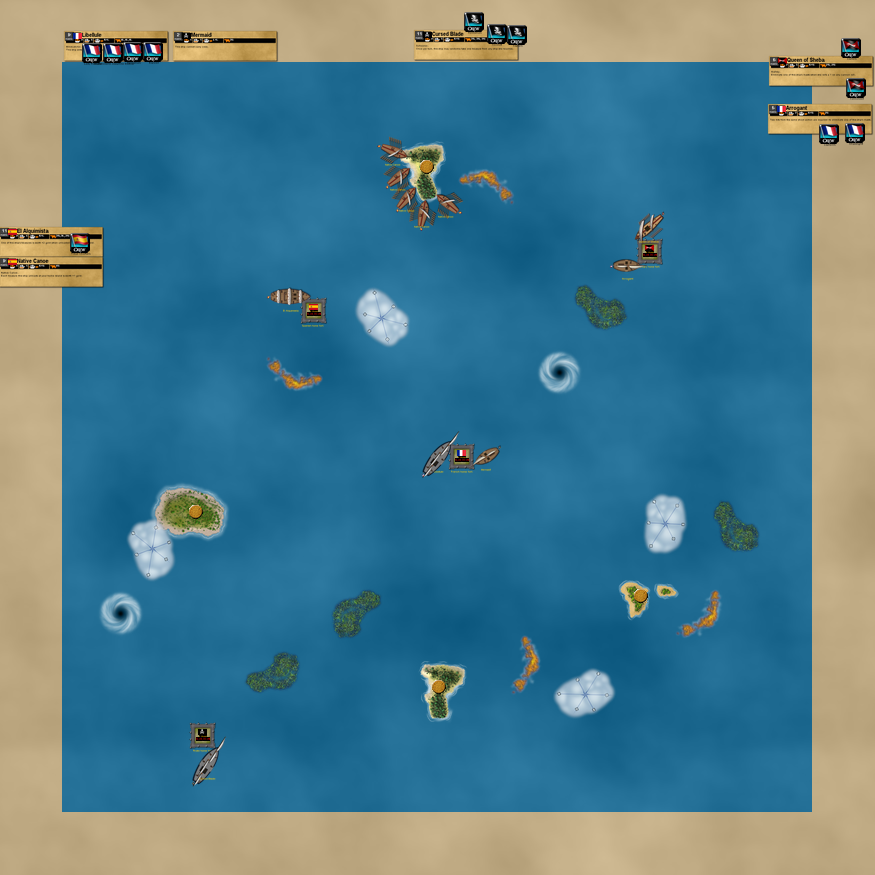 The game begins, and the Libellule proves feisty indeed! I know how much of a game-winner the gold bonus abilities are, and with a lucky SAT from Roimata I was able to cripple my other fleet on the first turn! The Libellule missed her shots and ram, but the boarding part was what mattered. The chieftain was eliminated and rolled a 6 to eliminate 3 of his native canoes!! 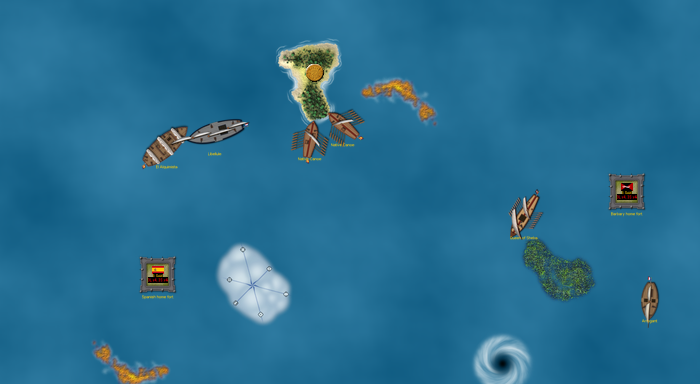 Another SAT, and more carnage in the north: the Libellule wreaks further havoc, blasting masts off the Alquimista and Queen of Sheba and eliminating a canoe. 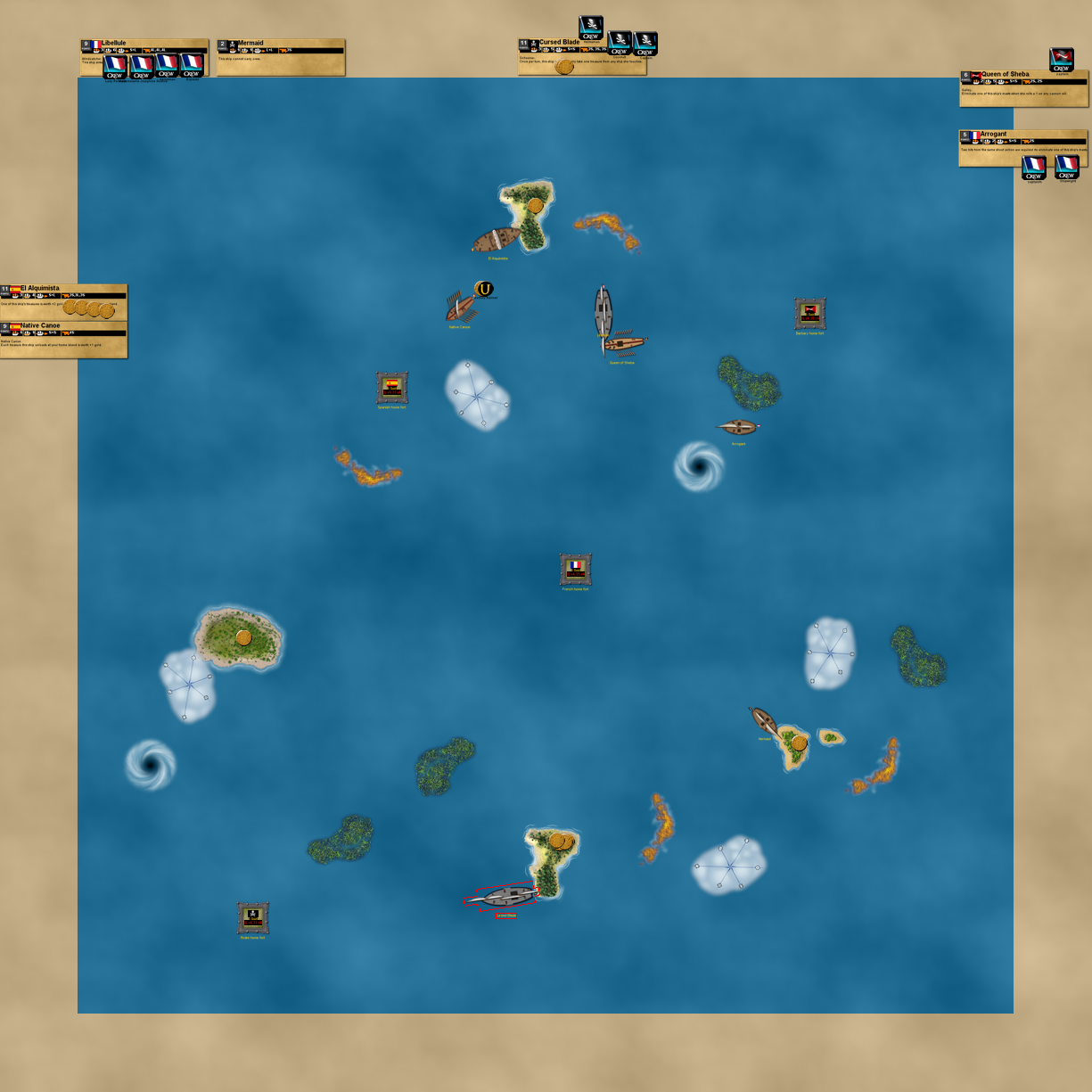 With more extreme luck on my part, the French absolutely dominate! The Libellule is a one-ship wrecking crew, eliminating the Spanish by taking out their last canoe and dismasting the Alquimista! The Arrogant looks to salvage the Queen of Sheba, while the French have even more luck! The Mermaid finds Turtles in the southeast! However, this allows the Cursed Blade to fly under the radar…. 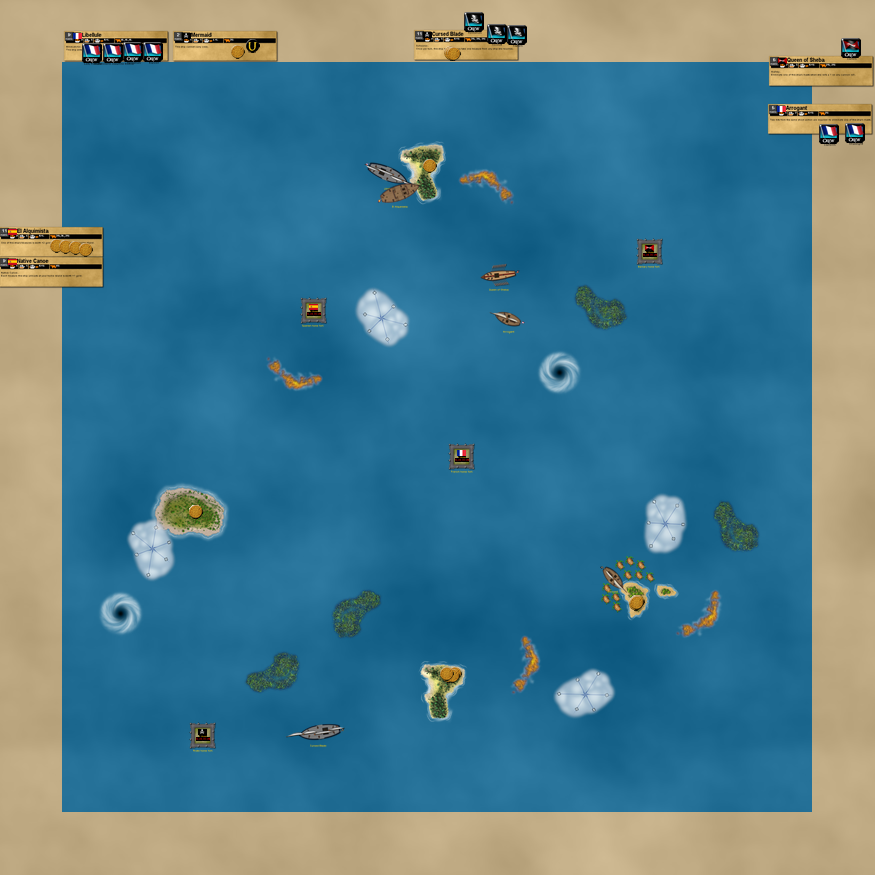 After capturing the Alquimista and QoS, Roimata sets her sights on the Arrogant. 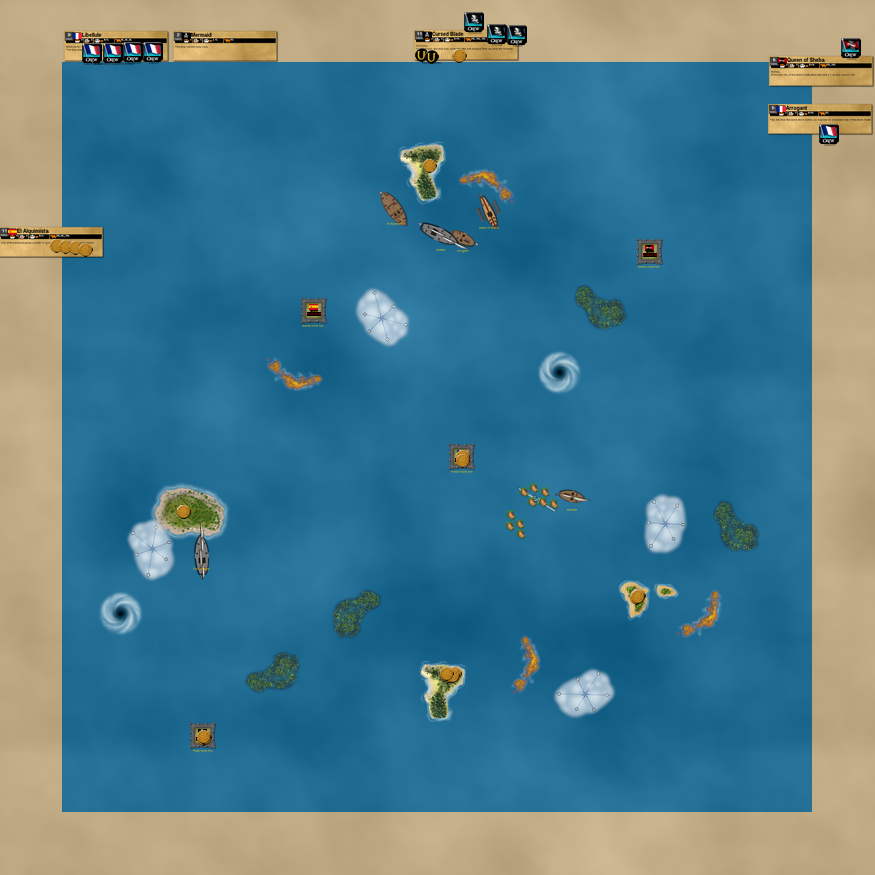 The female named crew of the Libellule prove effective once more, as the Arrogant falls and so do the Corsairs! At this point, the Libellule has single-handedly eliminated half of the starting fleets and captured 3 ships. 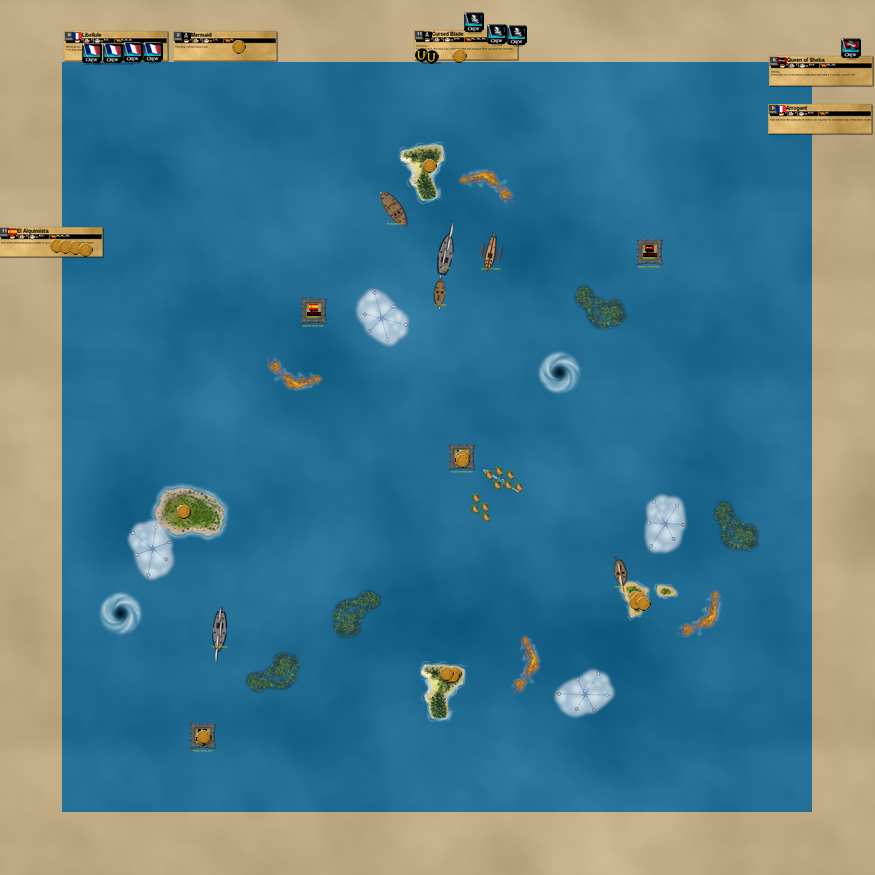 The Turtles reached the French home fort, where the Alquimista and QoS looked to repair. The French hastily made plans for a possible attack…. 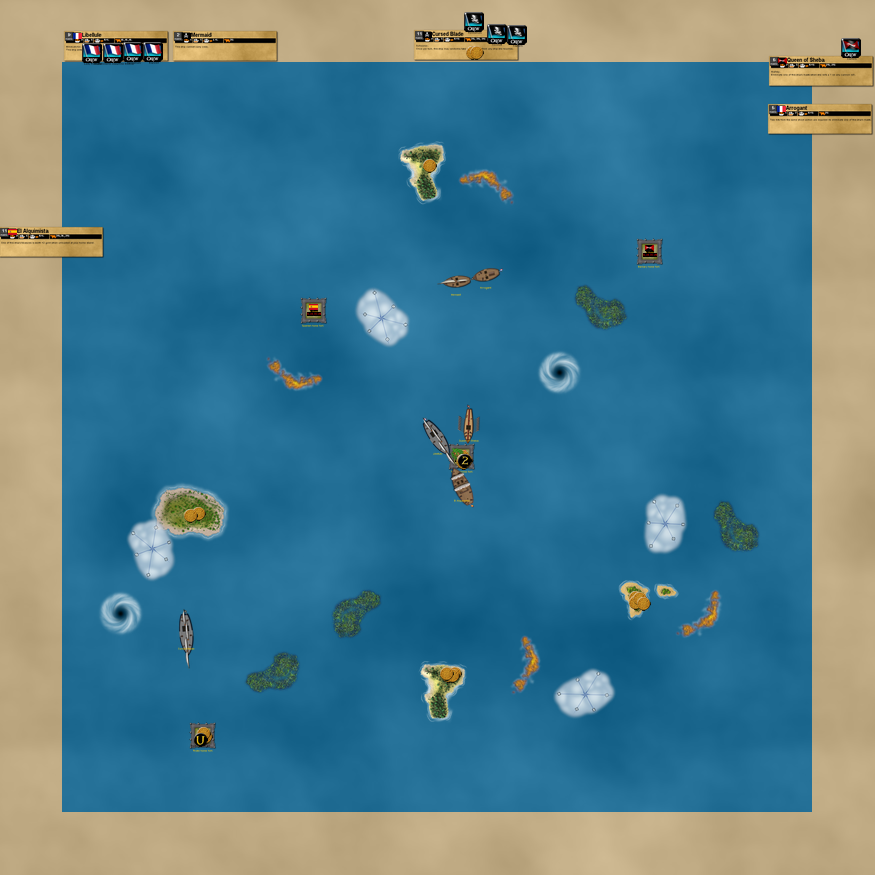 The Pirates continue to run gold, while the French amass an empire relative to the tiny build total! Here they control 45 points total, more than twice what they started with. With 5 now-healthy ships, they look to the southwest and the Pirate fort that is burgeoning with shiny coins.

The Cursed Blade is about to round earth to the southeast, while the Alquimista stays behind to finish a little gold factory operation. 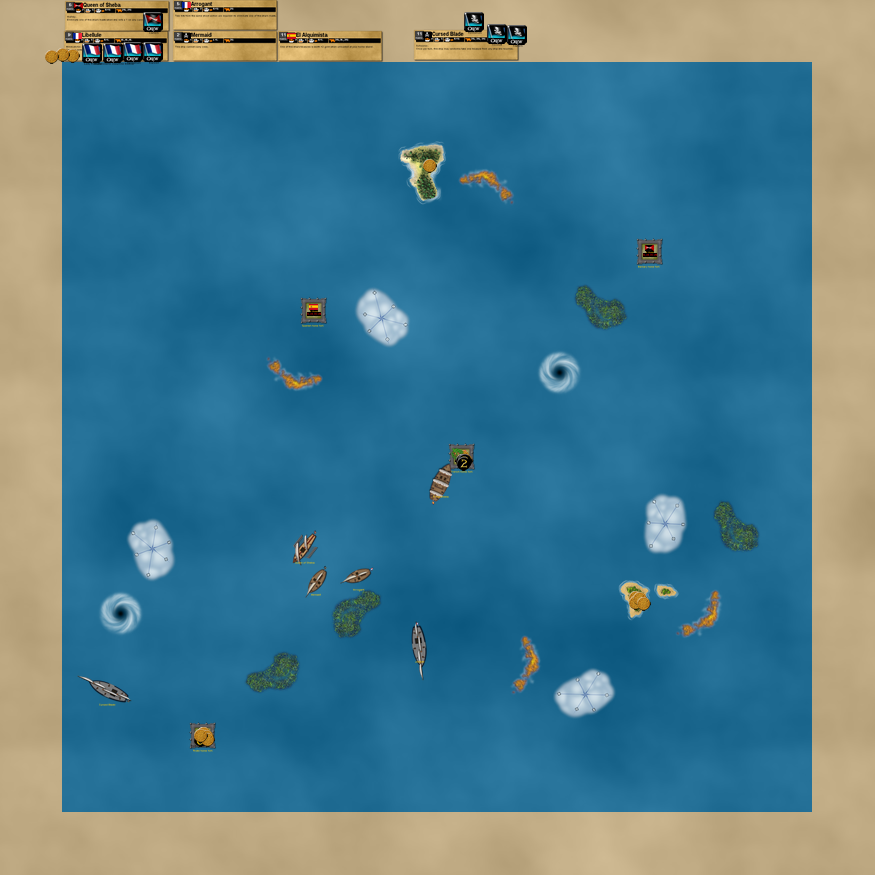 The fun of round earth! The Cursed Blade gets Homing Beacon, but can’t quite use it.

The Mermaid tries to block the Cursed Blade’s route home, while the Libellule waits for an SAT from Roimata to start the assault on the fort.

Attack!! Sudden chaos at the Pirate home fort! The Cursed Blade got home via Homing Beacon (not using round earth), but the French attacked in full force. The first bombardment took out 3 of the fort’s 8 cannons, while the Arrogant, Mermaid, and Alquimista tried to get into position. 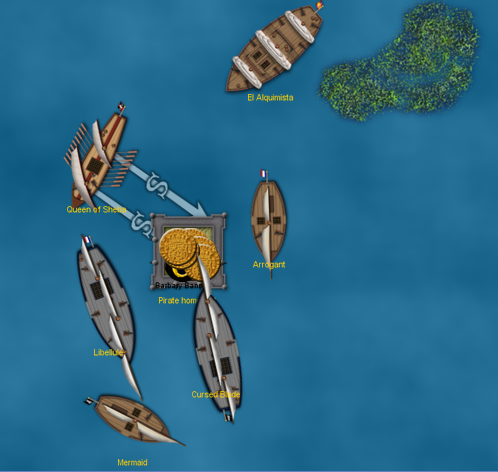 The Cursed Blade dismasts the Mermaid and damages the QoS. The fort sank the Libellule, ending her string of luck and taking out the surefire MVS (Most Valuable Ship) of this contest. The Alquimista and Arrogant battled the fort for a few more turns, but eventually were overcome by the superior firepower. The Arrogant barely escaped… 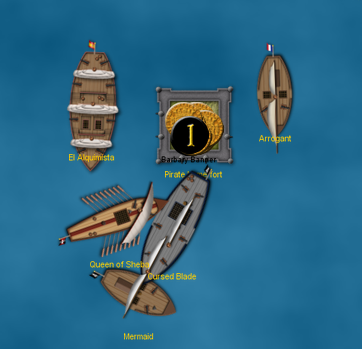 … but she was cornered by the Cursed Blade to end the game! Despite the 10 gold from Turtles and 6 gold from the Alquimista’s bonus, it wasn’t even close. The Pirates had found all the good coins for a whopping 59-31 victory! 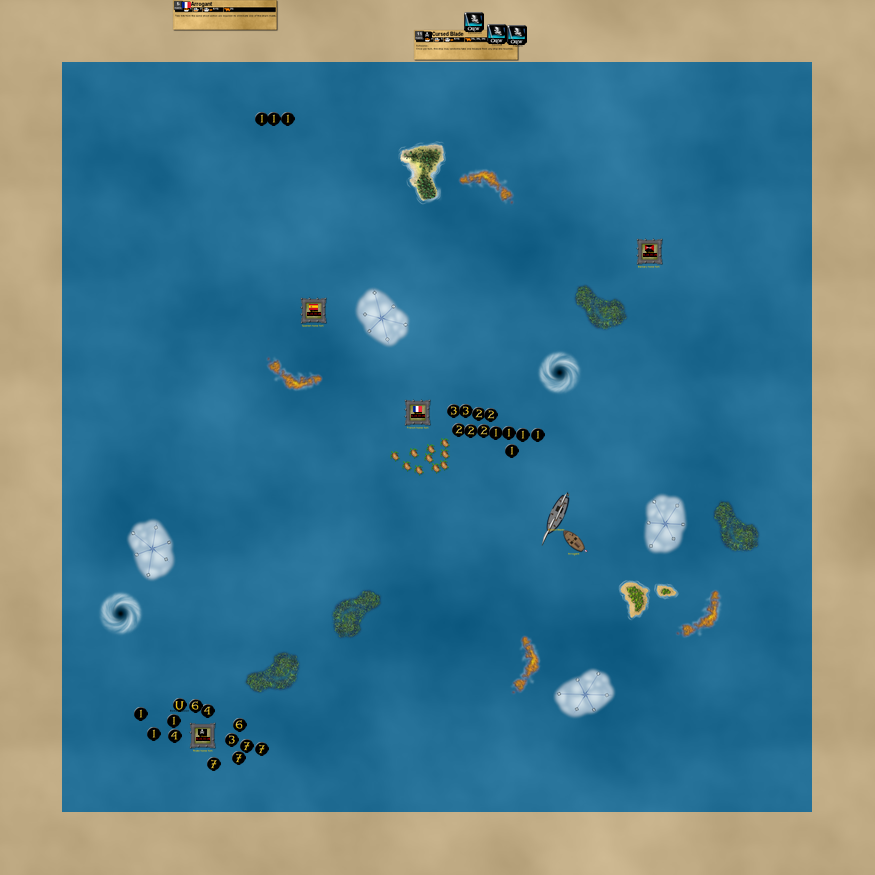 This was a fun and unique game that saw absolute domination by a single ship until the actual gold was counted. Repkosai enjoyed the introduction to the Water World rules, and we look forward to playing more unique games in the future! Hope to see you on VASSAL on August 11th-13th!