Just played a game with Repkosai on the 4th of July!  Check out the video of the VASSAL game, which was live streamed on YouTube complete with thematic music!

Repkosai wanted to be the Americans, so I played the English/British and rolled to go first:

(all game pieces found in the Master Spreadsheet)

The Algiers got an extra action (EA) on her first turn, and I promptly decided to try a strategy I haven’t used very often.  The firepot specialist and oarsman were left at the English home island, allowing the Algiers to load up Hardwicke the marine and drop him off at the center wild island!  Hardwicke, especially with his hatred of the Americans, was to deter the colonists from getting gold from “his” island.  In the meantime, the Greyhound decided to escort the Frolic to the northeastern island, which looked like it was going to be hotly contested after Preble gave the Plymouth Rock an AA (Admiral’s Action) to approach it. 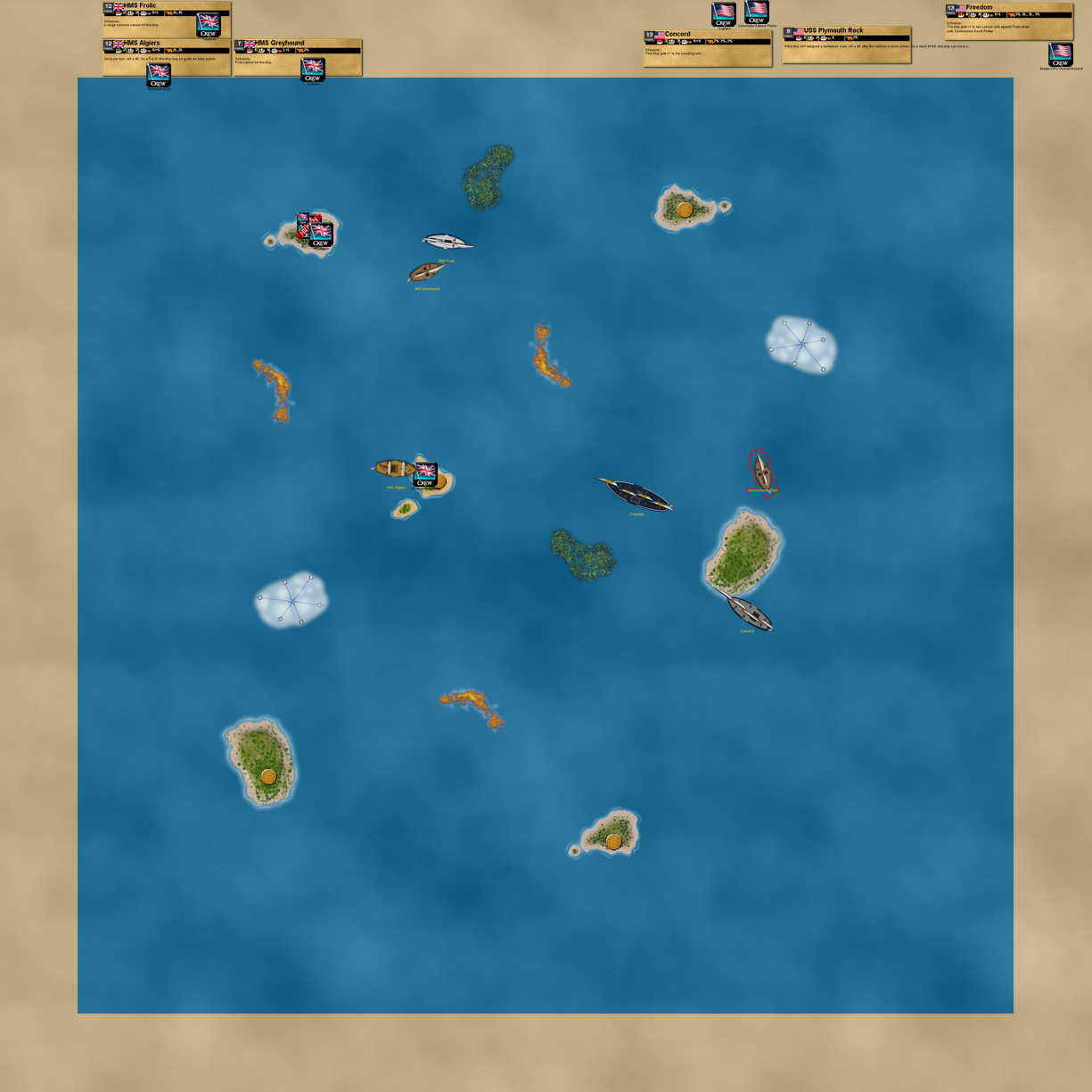 The Algiers quickly sails back home to pick up her other crew, while it appears that both early-game wild islands will be fought over.  (whether through naval battles and/or amphibious operations!) 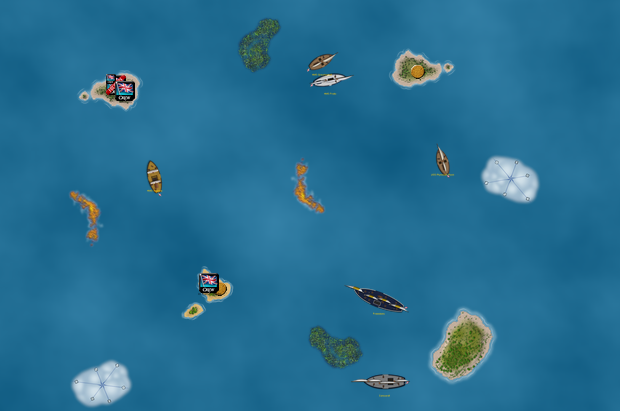 The English take the initiative and fire upon the Americans!  Hardwicke misses, but the Greyhound maneuvers well enough to score a hit on the Plymouth Rock, dealing a blow to the US gold cause.  The Freedom and Concord will now have a free pass at the exposed English marine, but the Algiers has picked up her full crew complement and is lurking nearby…. 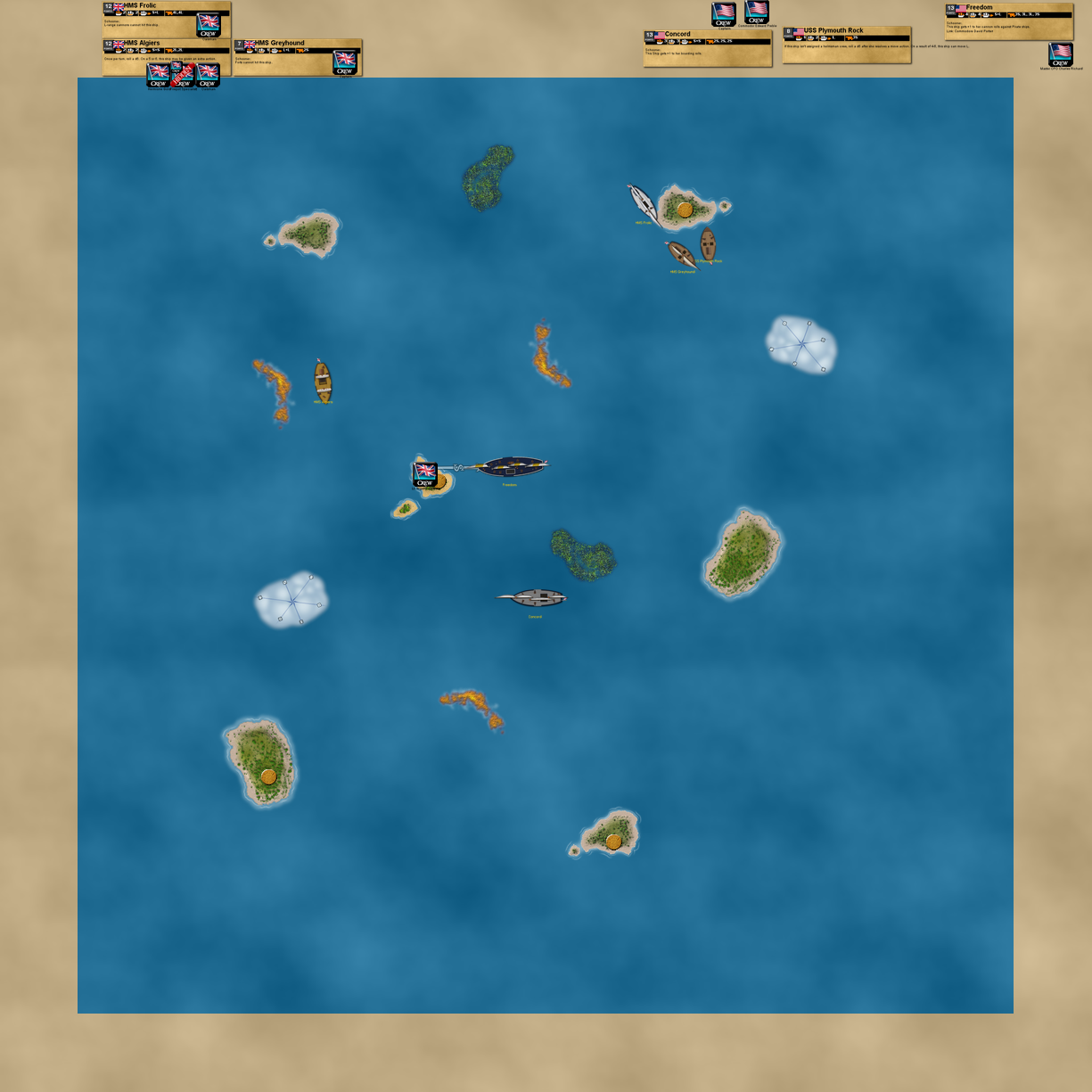 A closeup of the action at the northeastern wild island, with English gunnery prevailing. 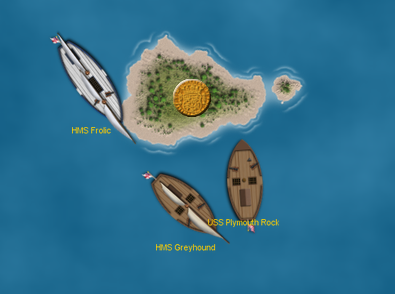 The Freedom approached the wild island and easily eliminated Hardwicke!  However, my luck was far better than usual, as the Algiers received an EA.  Not only that, I revealed my firepot specialist and hit 3 times out of 4 to cripple the Freedom! 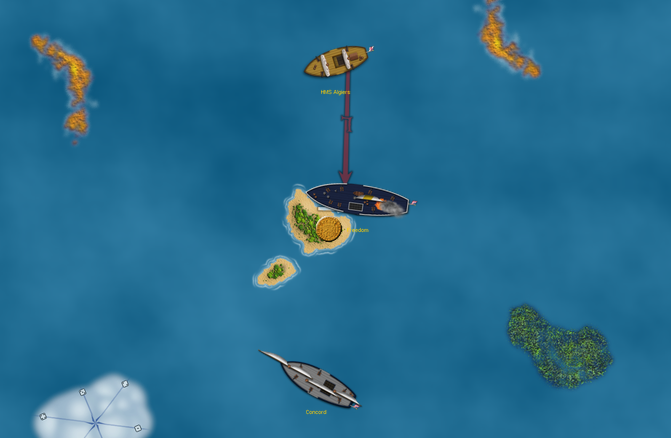 The Greyhound captures the Plymouth Rock, as part of another plan I hatched…. 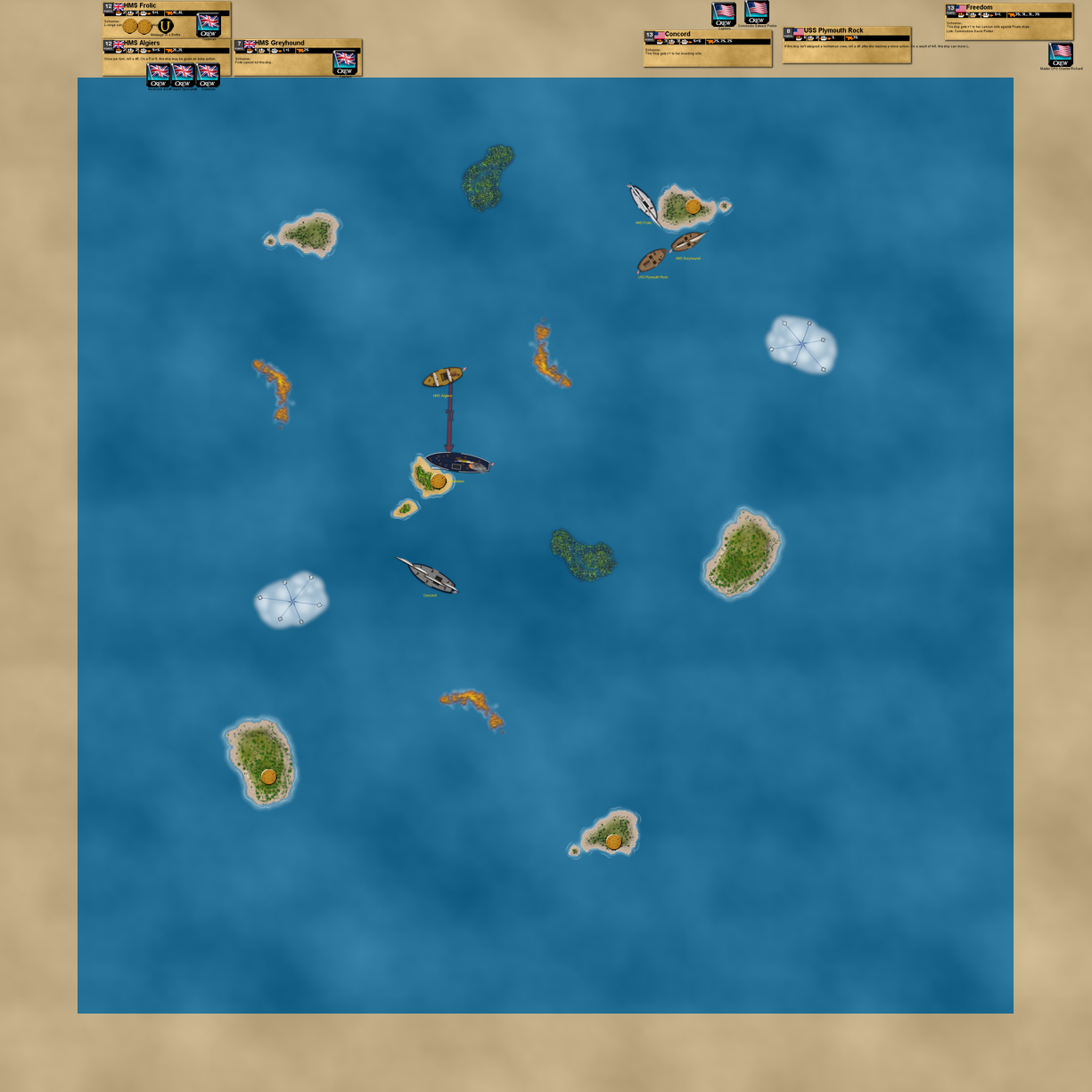 The superior speed of the Algiers proves effective, as the English are able to set another American gunship on fire!  With the Freedom’s final mast succumbing to the flames, the Plymouth Rock captured, and now the Concord also aflame, the Americans are in deep trouble. 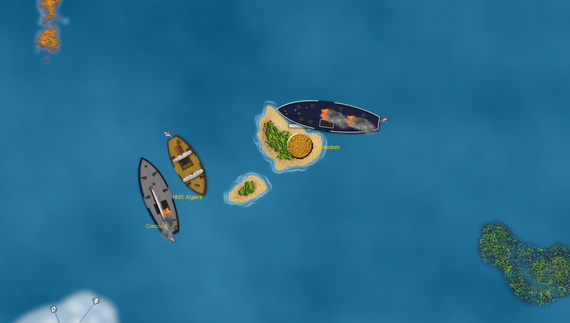 But just as the American music turned to a more upbeat march, the Americans fought back hard!  The Concord’s crew watched the Freedom burn to the waterline and were determined not to suffer the same fate!  Simultaneously fighting fires and firing their cannons, they plowed the schooner into the dreaded Algiers.  With a successful shoot, ram, and board, Repkosai’s Americans went 3 for 3 to dismast the Algiers and eliminate her oarsman!  (in hindsight I should have eliminated the firepot specialist)  The English had lost their primary gunship, but another plan had come to fruition: after the Frolic docked home her gold, the English built Ramsgate in the northeast!  My plan was to establish a second base of operations while also letting the captured Plymouth Rock repair so the Greyhound wouldn’t have to tow her home at just S speed. 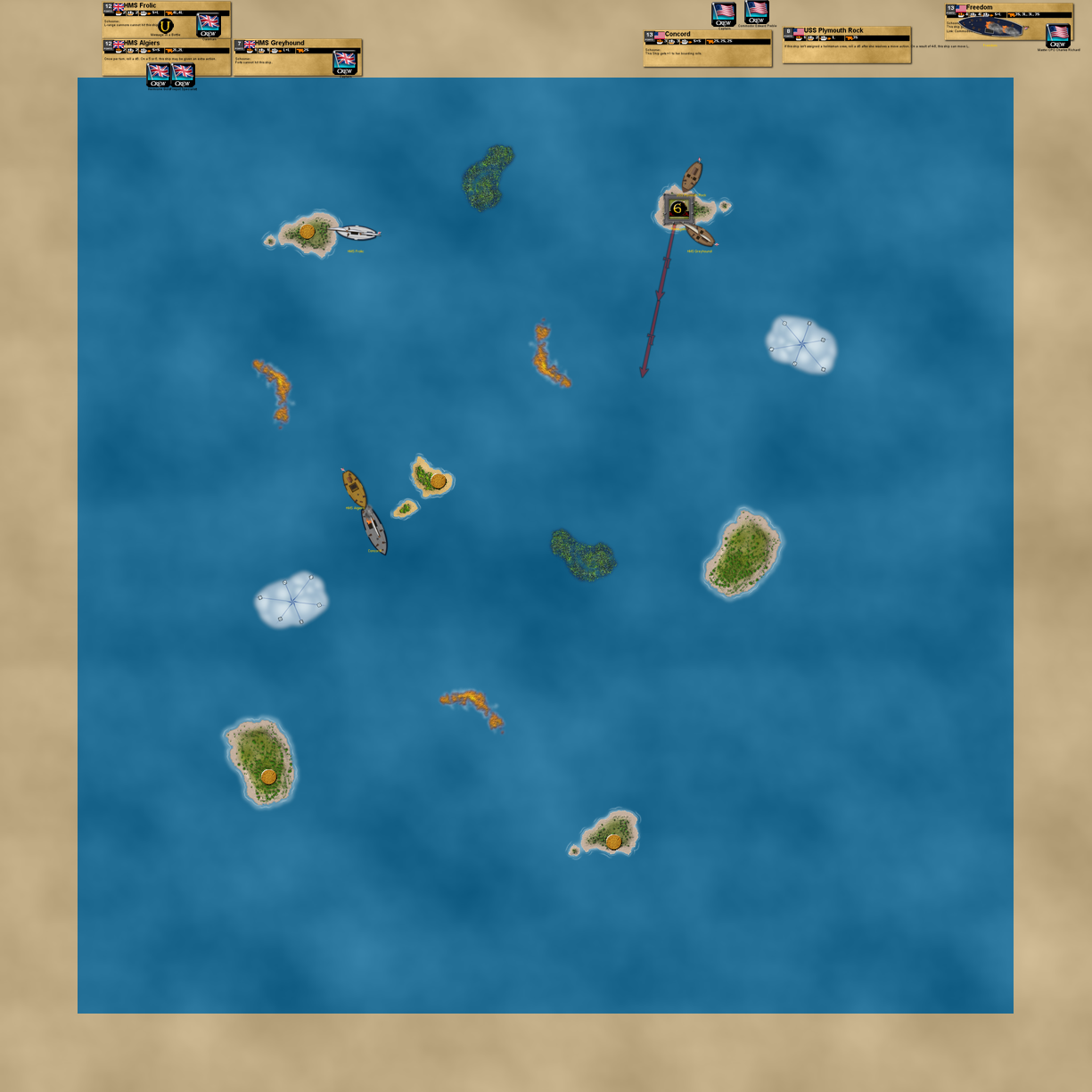 Alas, it was too late.  The Concord’s crew were exhausted from the dual fight against the flames and the Algiers, and the ship was lost to fire.  In a surprisingly short game, the English had won an exciting victory!  (final score was technically 12-0, with 3 gold on the English HI and 9 total in the fort)

We discussed afterwards that although Repkosai seemed to have better fleet construction (my fleet had just 5 total masts along with an expensive and ineffective Marine), I had almost all the luck.  Rolling to go first was just the start, as the Algiers rolled for a couple of well-timed EA’s and my cannons hit something like 6/7, which is nearly unheard of for me.  Despite the shortness of it, we had fun and look forward to more soon!  Hope you had a great 4th of July! 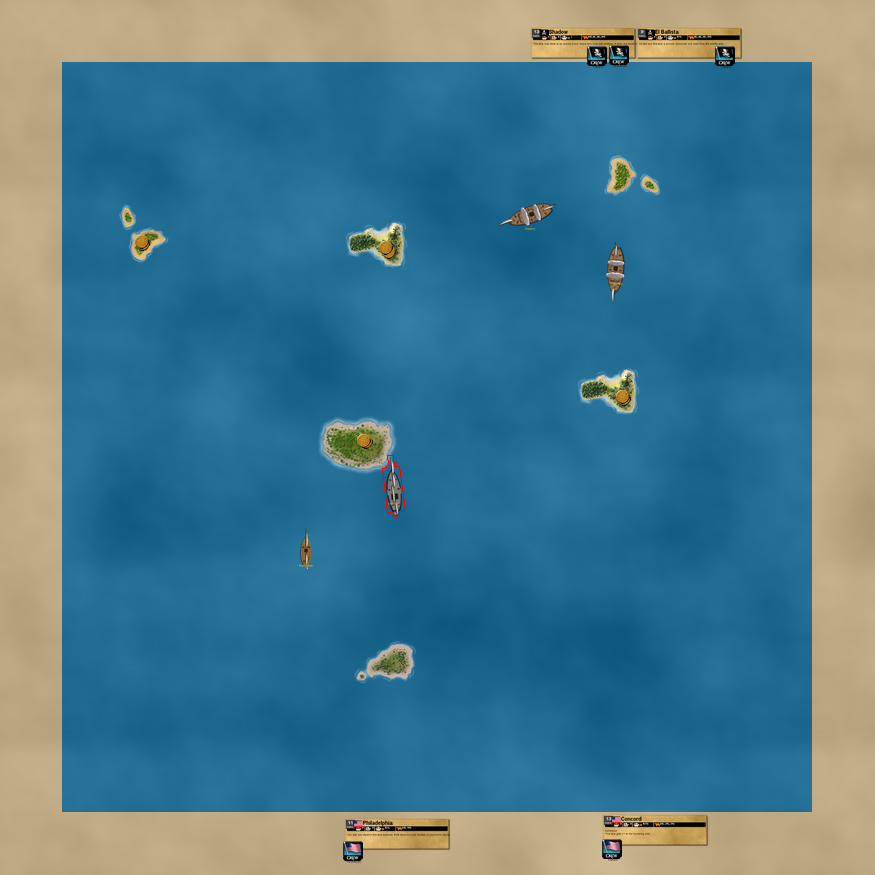 I used the Ballista as a suicide attack ship, similar to how I’ve seen her described before.  The Concord and Philadelphia broke from the wild island and sailed away.  The Ballista caught the Concord and hit once in three tries. 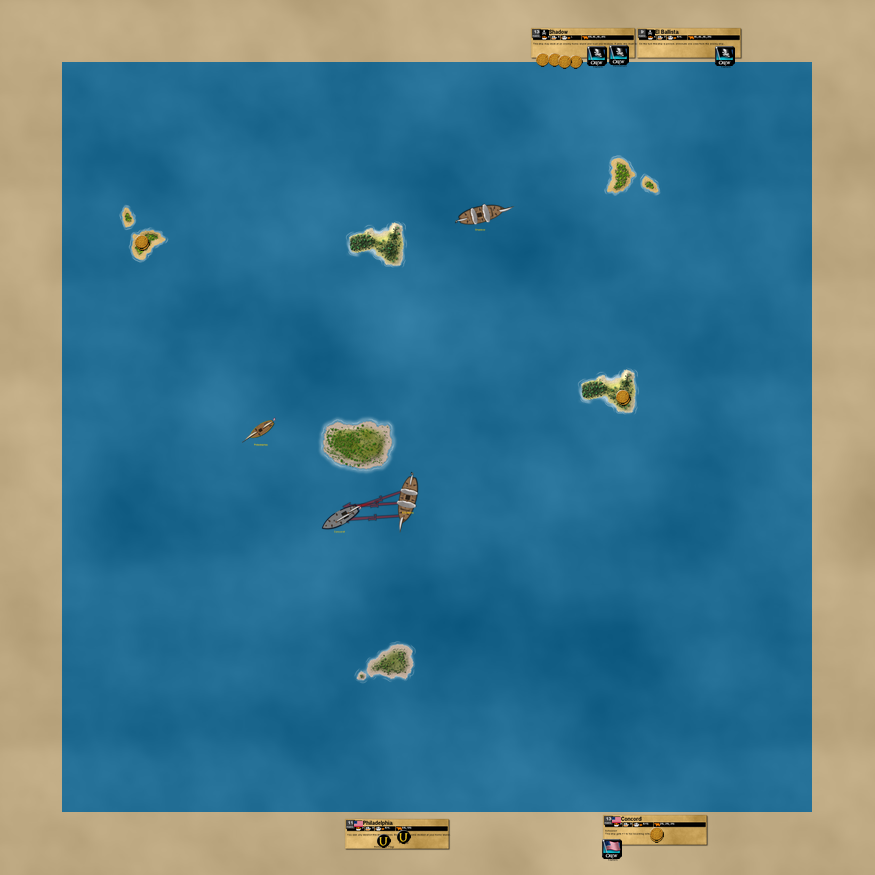 The Concord and Philadelphia turned to fight, but the Ballista was already charging forward once more!  She mashed masts off of both ships before losing one of her own to the Concord’s accurate cannons.  The Philadelphia rammed the Ballista to give her the Plague, which eliminated her captain.  By this point the Shadow had unloaded an island worth of gold, and the Ballista was able to finish off the Americans.  The Pirates of 2004 had won a 5-0 victory! 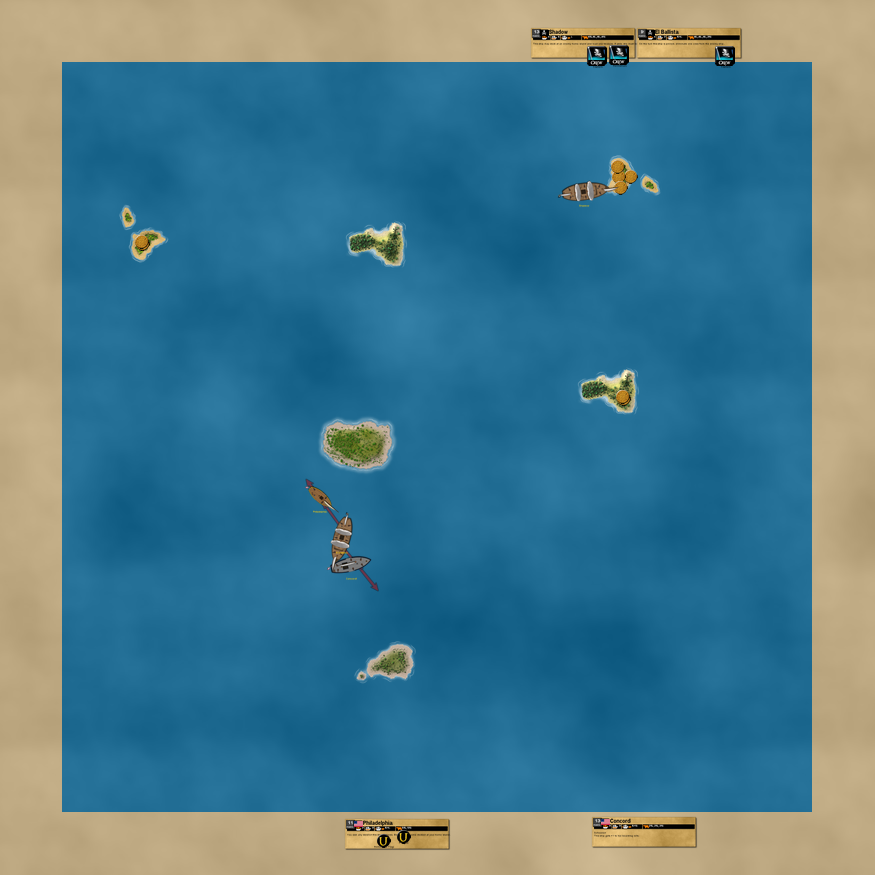 This was a very short and simple game, but it was repkosai’s first game on VASSAL and we hope to play more soon!