A Brief Experiment with Return Fire

I was joined on VASSAL by agiantpie! The setup was for 80 points.

I went with a French fleet that had also hired El Fantasma aboard the Hades’ Realm, while agiantpie went with an all-SM English fleet. Plenty of fog was around. (you can find all the game pieces in the Master Spreadsheet)

In addition, we decided to experiment using basic return fire rules! Once a ship was done shooting at another ship, the second ship could return fire with any cannons it had left, though they would get -1 to their rolls. 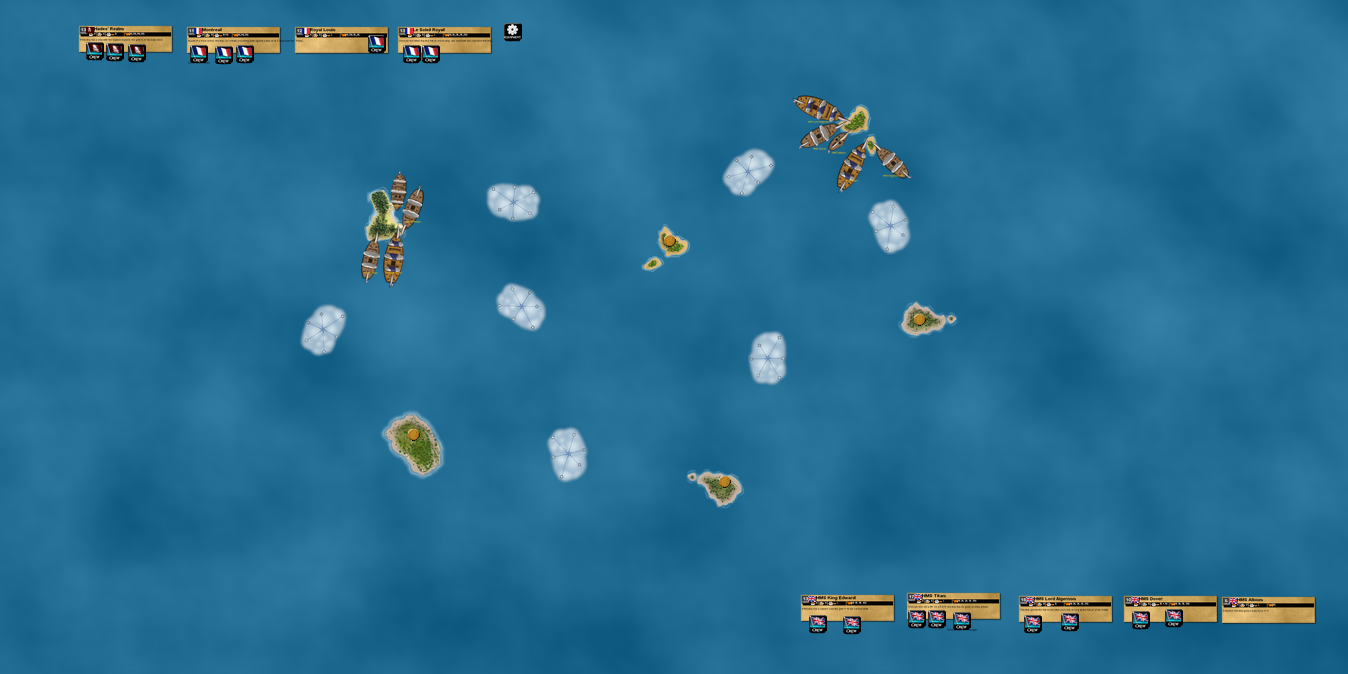 With an SAT, the Hades’ Realm (HR) made it into a fog bank near the English home island. 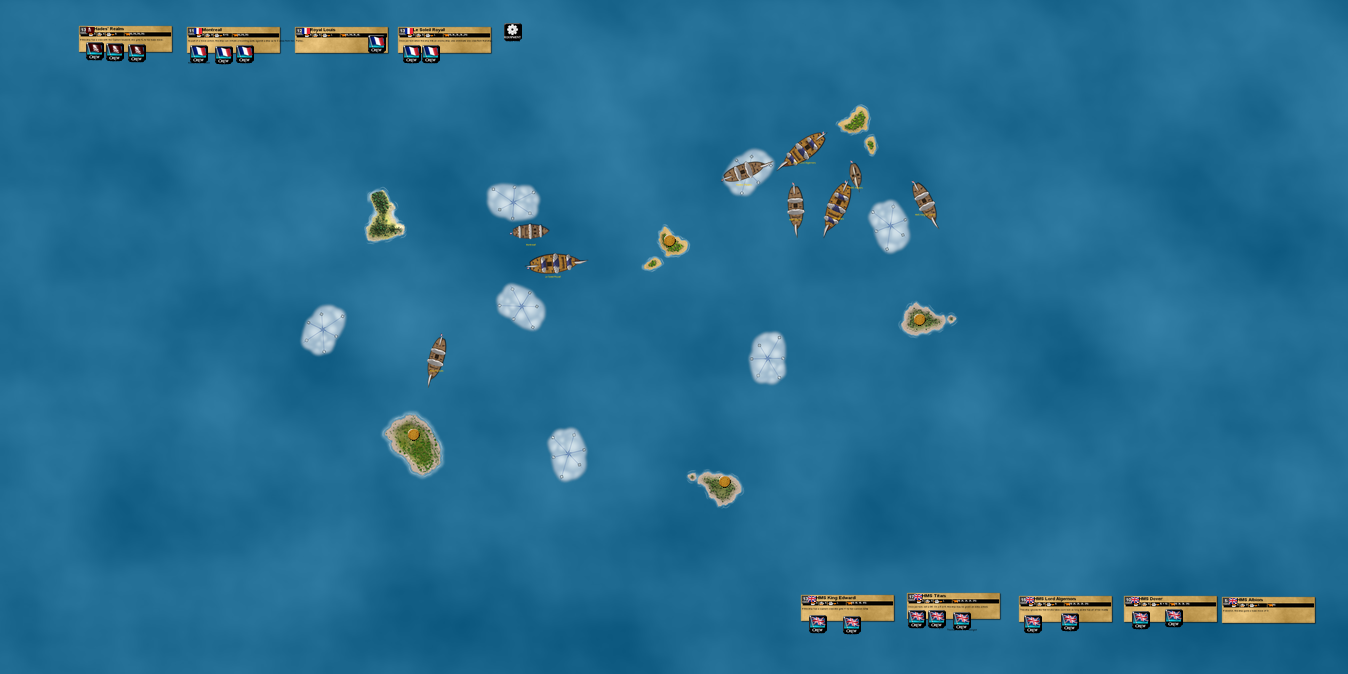 The Soleil Royal, Royal Louis, and King Edward all reached wild islands. The HR got an SAT coming out of the fog, and hit the Dover and King Edward with consecutive attacks! The Dover only lost one mast, but the King Edward was nearly dismasted, and Fantasma stole a 5 coin. 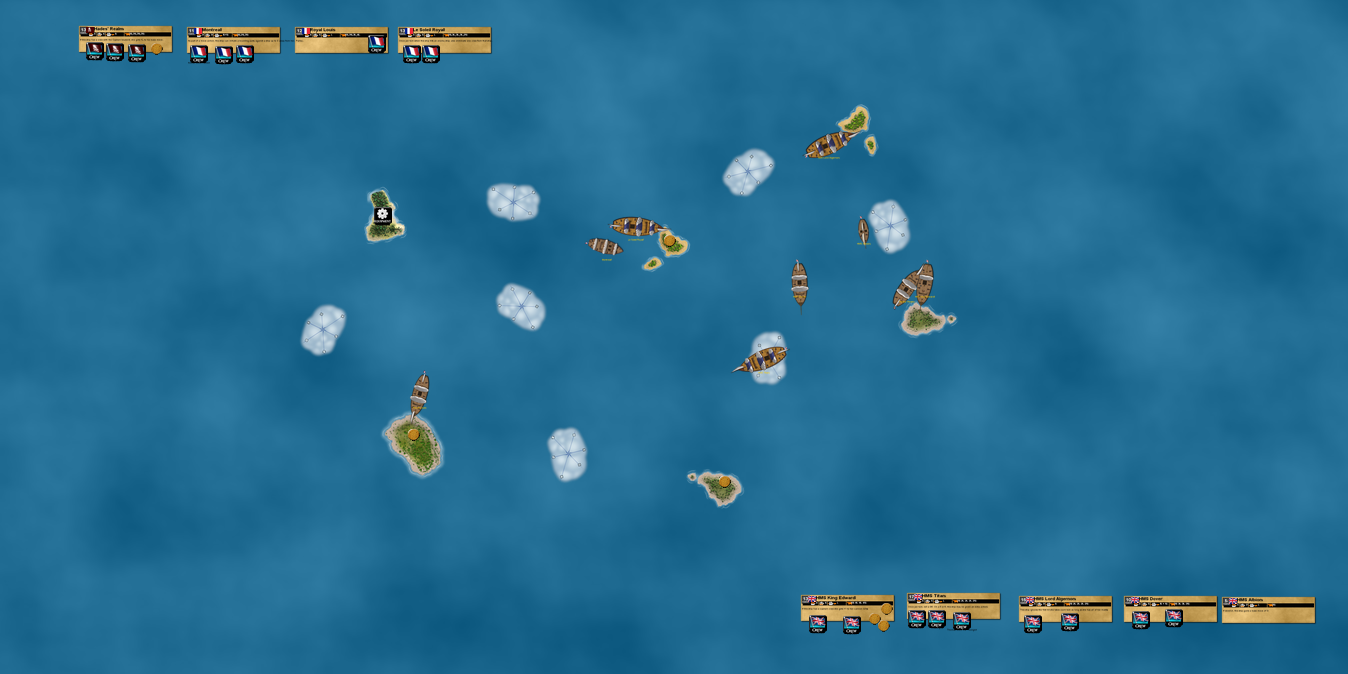 With yet another SAT, the HR eventually sank the Dover! This was too much for the English, and the Titan finally caught the Cursed menace and dismasted her. In the meantime, the Montreal had taken up station in the fog bank where the HR was hiding earlier. 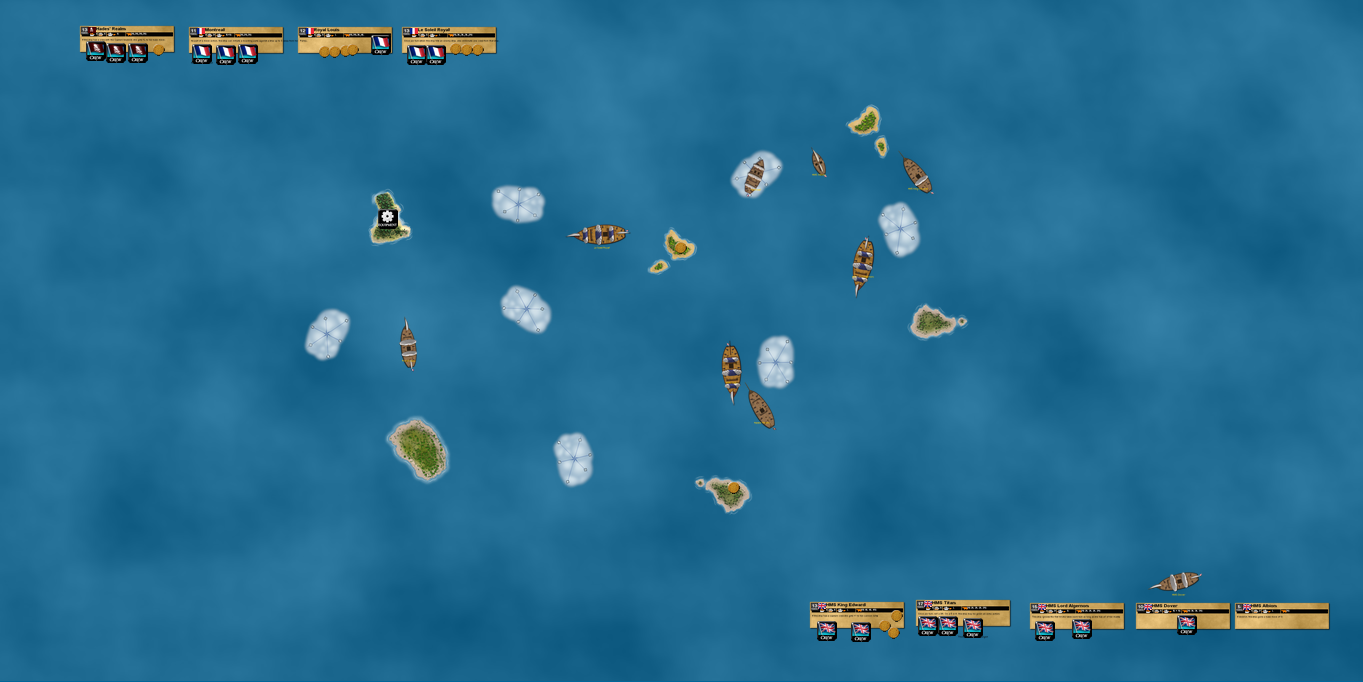 The Titan captured the HR and towed her into a fog bank to avoid the Montreal and get the stolen 5 back in English possession. The King Edward docked home gold and started repairing, while the Lord Algernon would explore the middle island. The Royal Louis and Soleil Royal sought the untouched southern island. 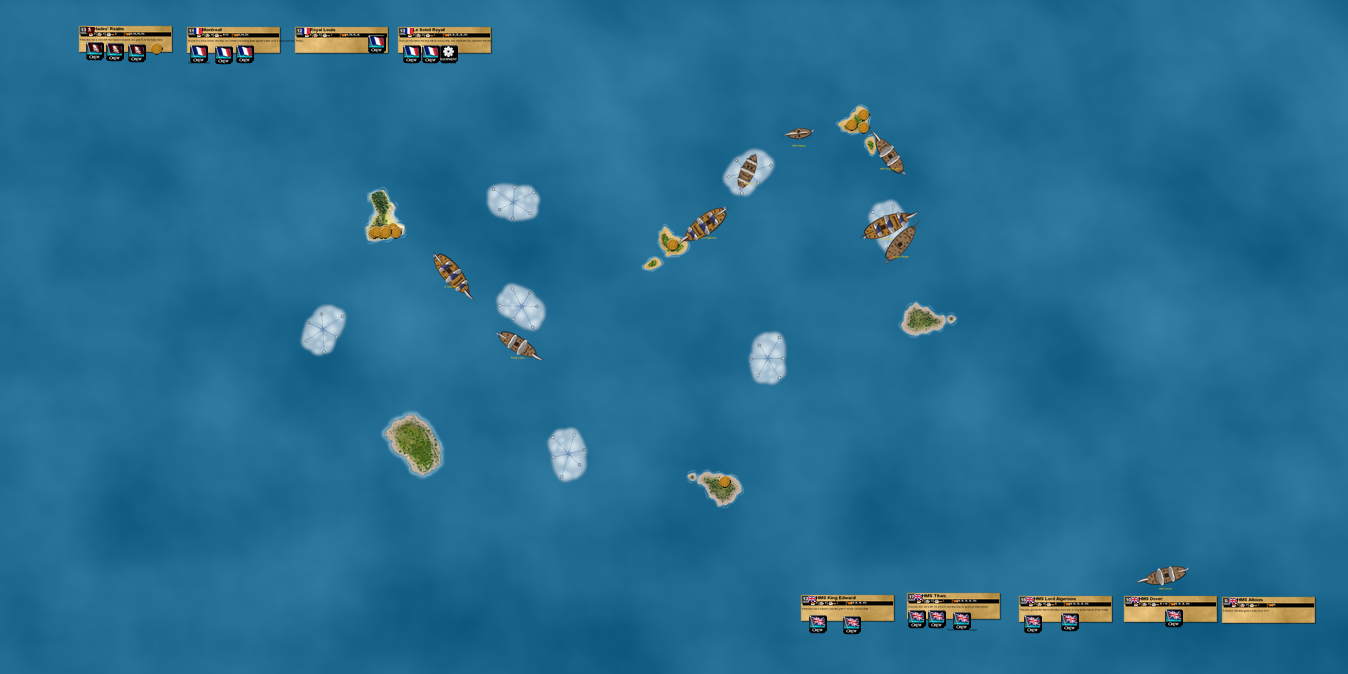 The Royal Louis has loaded gold, while the Soleil Royal prepares to defend her, waiting in the fog. The remaining English ships head southwest, while the captured HR repairs. 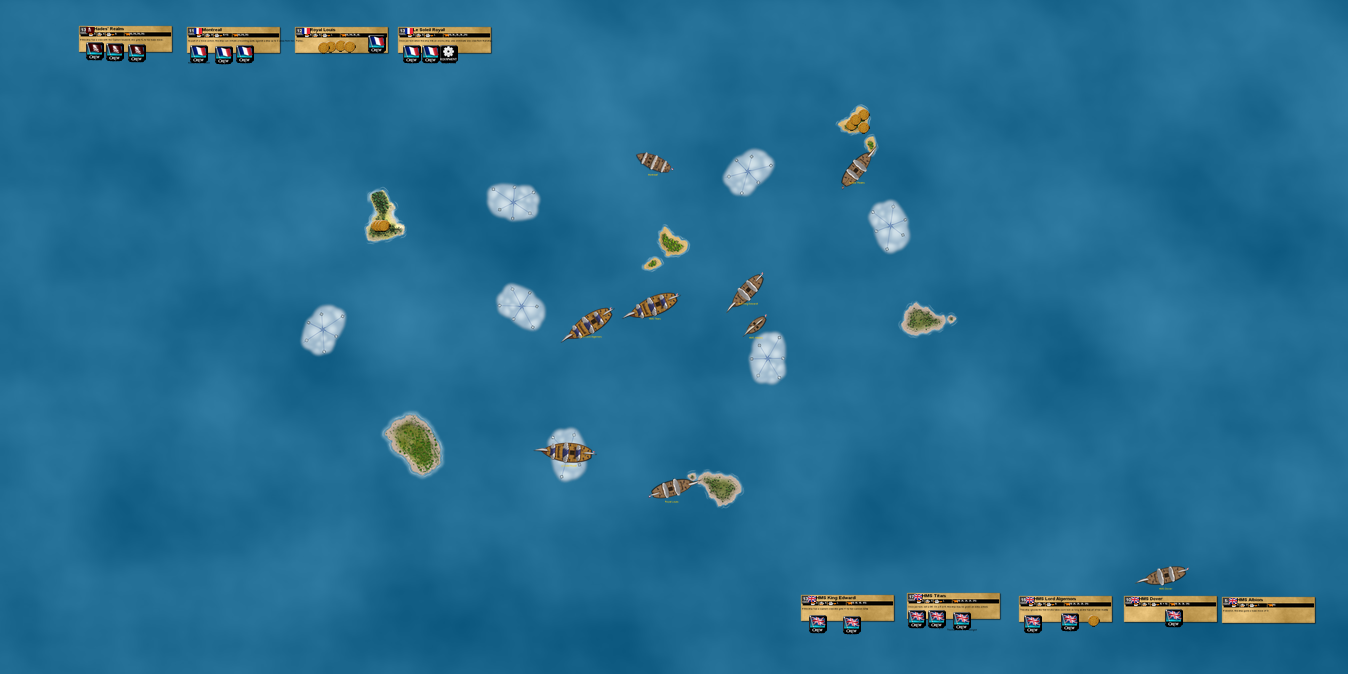 The Royal Louis parleyed her way out of some sticky situations, but that started to decrease the French gold advantage. The Soleil Royal lost a battle to the Titan after going 2/5 (including losing her grape shot on a 1) and taking major return fire damage (the Titan went 3/3). The Montreal did what she could to help, but it wouldn’t be enough. The Royal Louis ended up pinned, which further ruined French hopes. In the end, although the French parley gamble worked for a while (the lowest value coins from the HI were given up), the gold differential kept tilting towards the English, while the French fleet was soundly defeated in the south. The Royal Louis’ masts finally fell when she couldn’t afford to give away more gold, and the game was over! 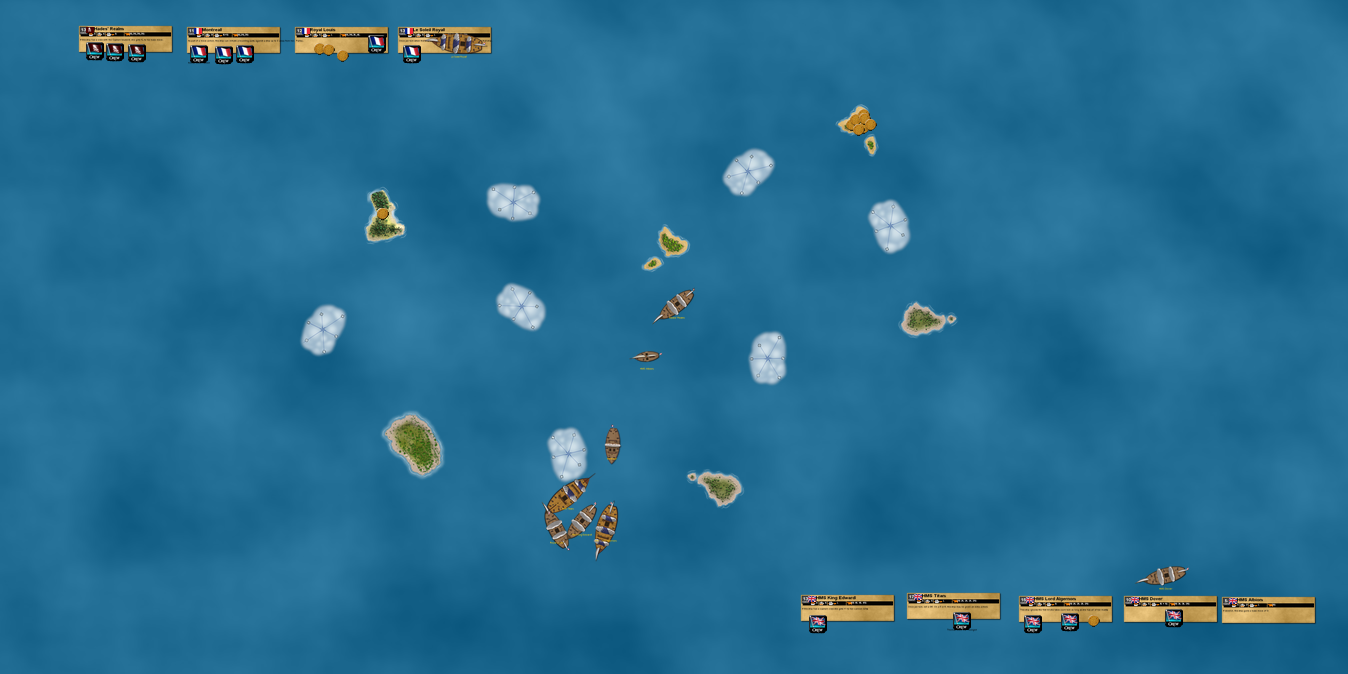 The English were up 21-15 at that point, when we decided to call it. The Montreal would have rowed home to repair, allowing the English to get the rest of their gold home and make the final score 33-15.

It was definitely a good game, if not frustrating for both of us lol. The return fire aspect was interesting, though I’m not sure the -1 to cannon rolls is enough moving forward… more playtesting is needed, and hopefully other forms of this oft-discussed but rarely-played house rule will see the light of play.