For his first game in quite some time, we went with a standard setup at 40 points.  He went Spanish with the Acorazado and Pescados de Plata, while I fielded a Pirate fleet with the Arabella, Zanzibar, and Fleur de la Mort. 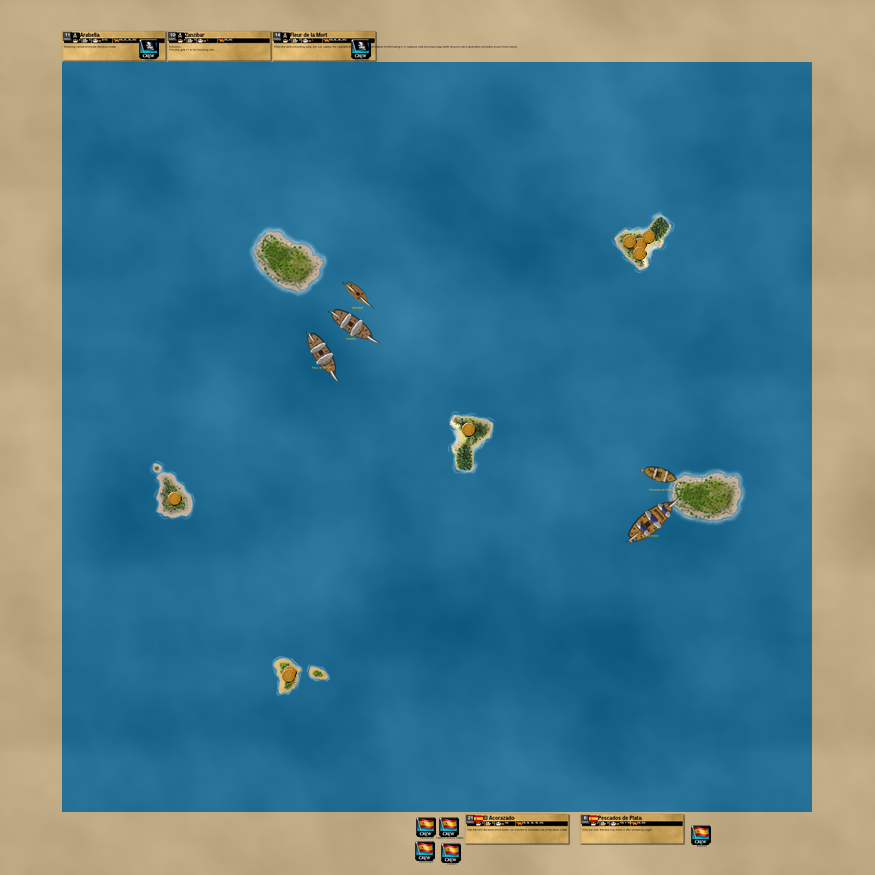 The Arabella and Fleur de la Mort got tangled with the Battleship, whose amazing defenses saved her from terrible dice luck. 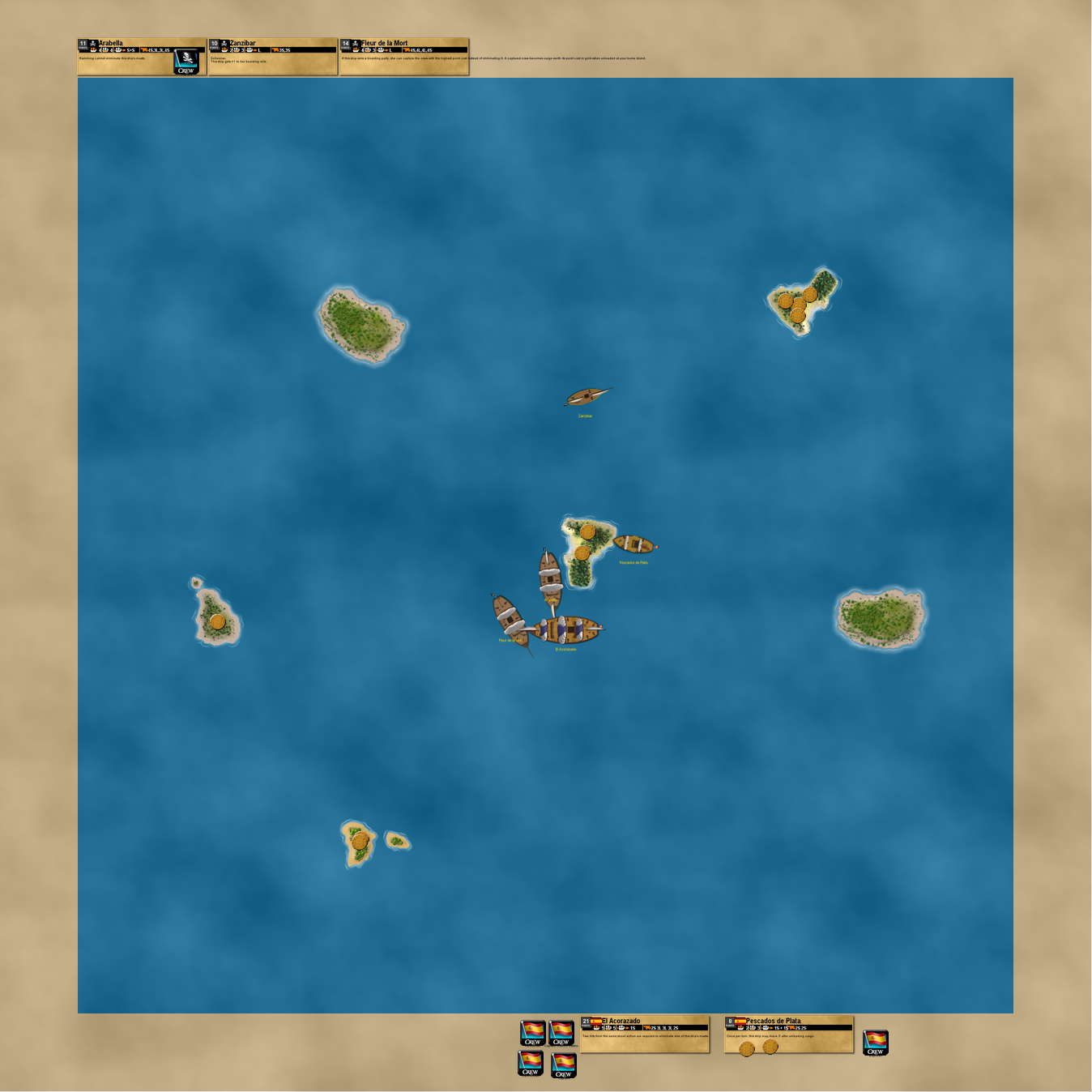 After a double shoot action by the Acorazado, the Pirates were in bad shape: 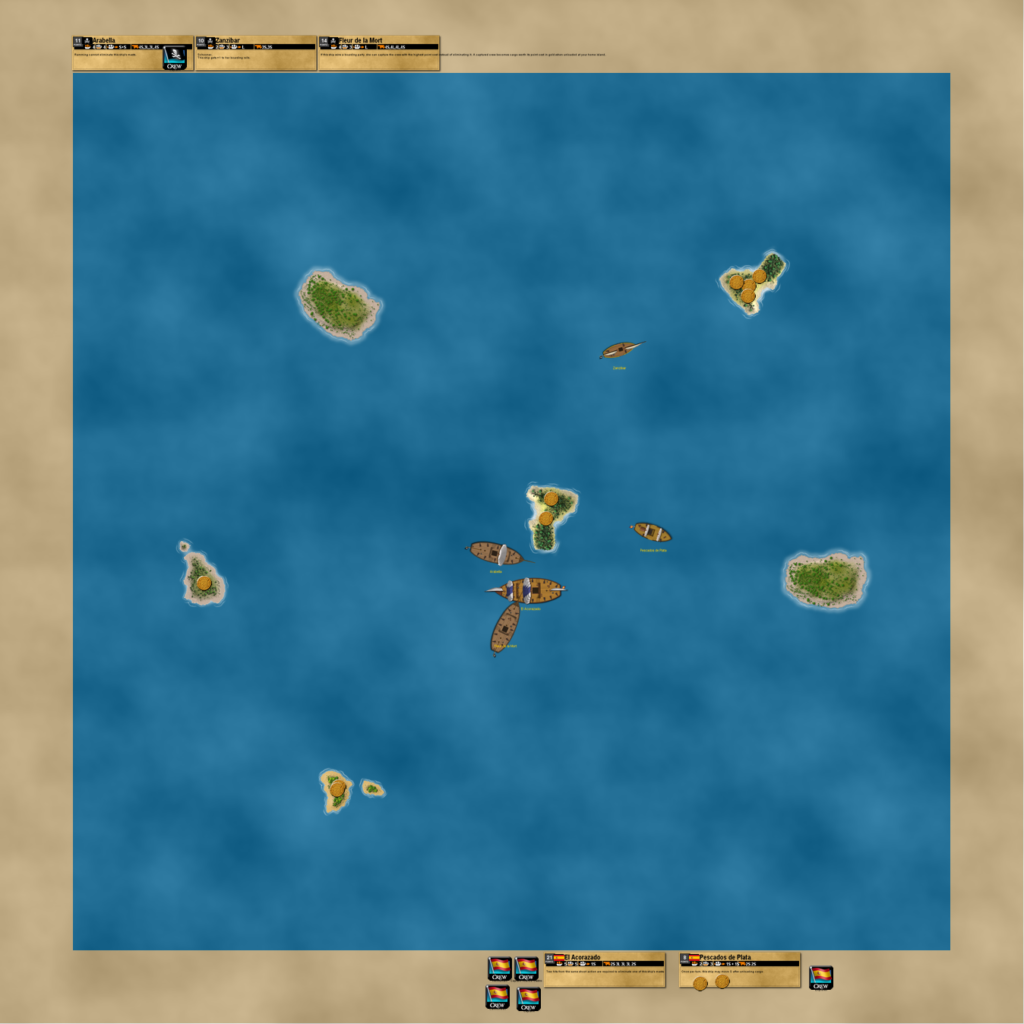 The Arabella took a mast off the Pescado before both her and the Fleur were sunk by the Acorazado.  The Zanzibar was chased down and the Spanish won in a shutout, 7-0! 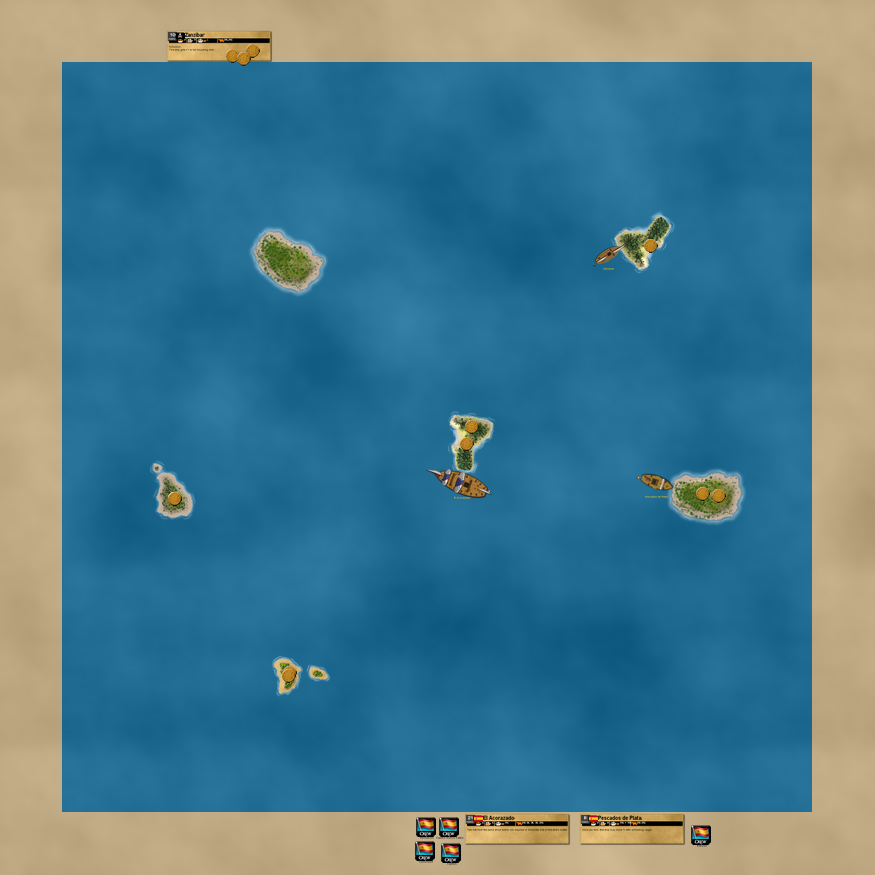 The second game was at 50 points, with two strings of terrain added.  A line of reefs and sargasso seas stretched out from the middle island.  I completely overhauled my fleet and went with a Crimson Coast Pirates theme, with the Victoire, Raven, and Royal James.  agiantpie added the Picador with a captain and cannoneer.

The Raven and Royal James took a nice amount of gold from the center island, while the Victoire headed north.  Both Spanish gunships headed straight for the tag team of Pirate schooners. 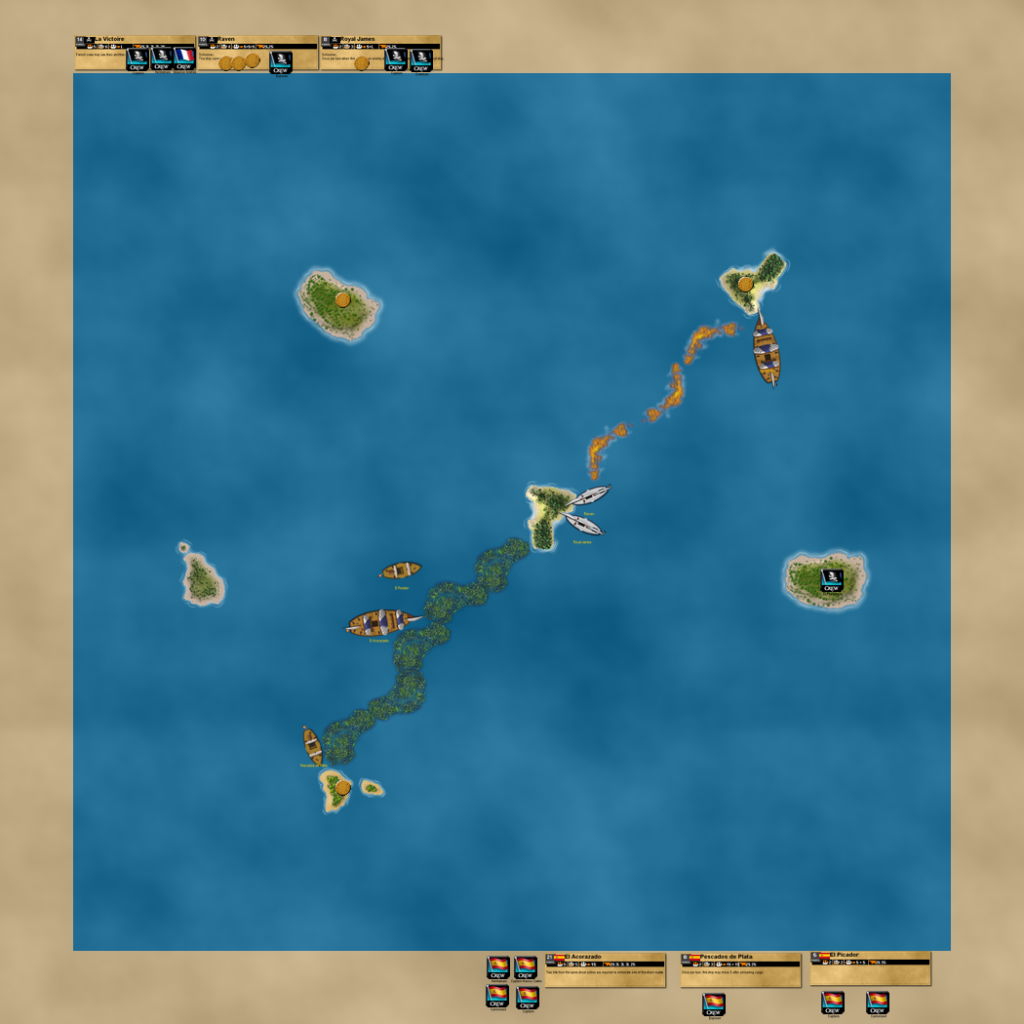 The Pirates were too quick for the Acorazado, who temporarily retired to the south.  The Victoire decided to take the more exciting route (which turned out to be a mistake heh, but at least it was more interesting) and use the Sextant UT to cross the dangerous reefs to attack the Picador, who had sailed north. 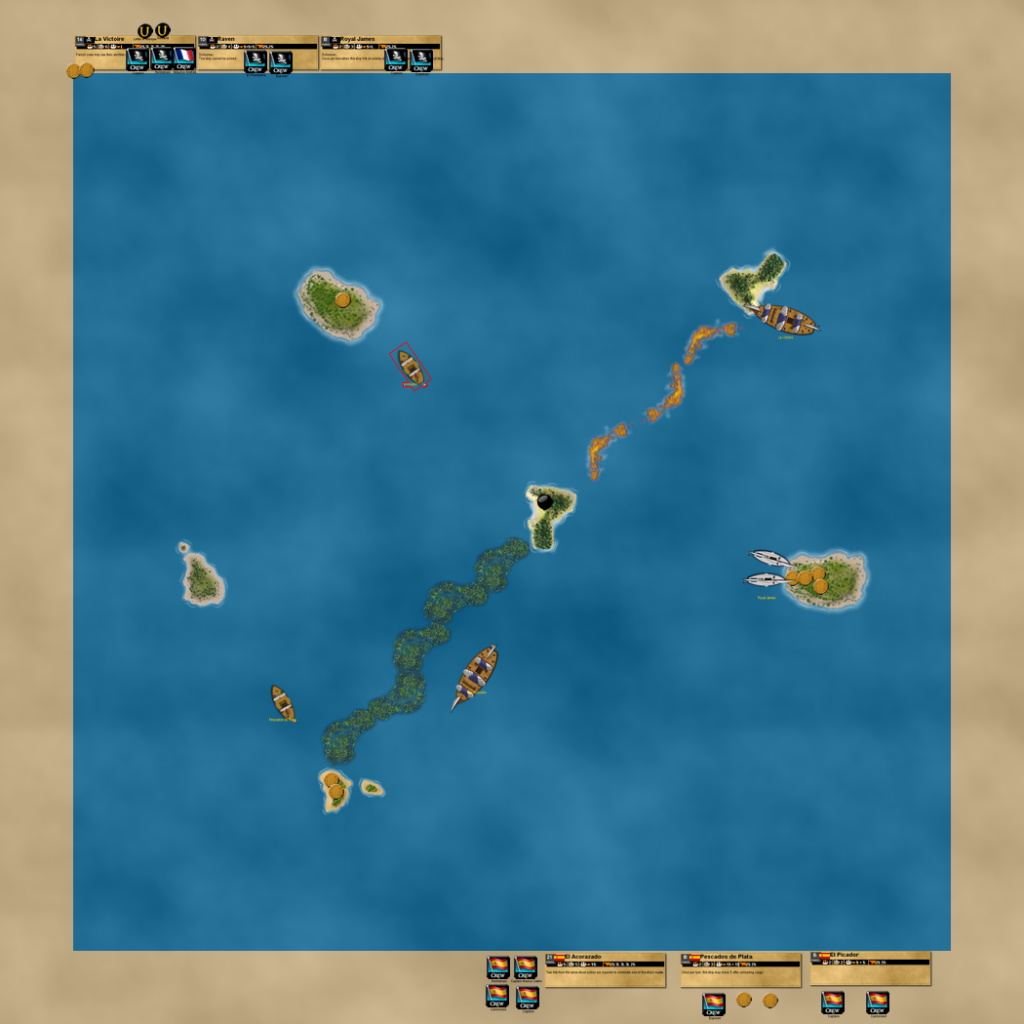 The Raven and Royal James wanted to avoid the Acorazado and get more gold, possibly with El Phantasma aboard the Raven. 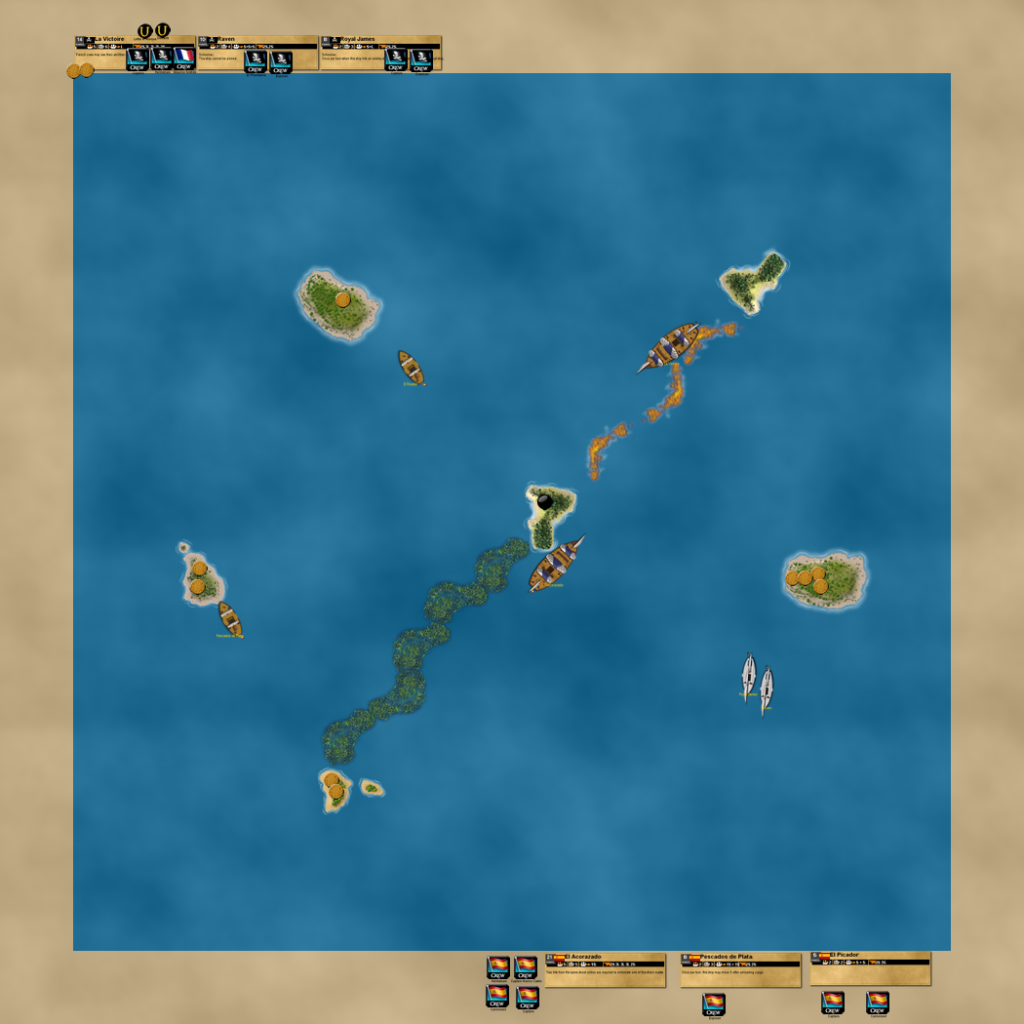 However, the Acorazado got an SAT from Castro and dismasted the Royal James!  The Raven’s escort was smashed, but the RJ managed to effectively block the Acorazado by rowing up to her, allowing the Raven to escape. 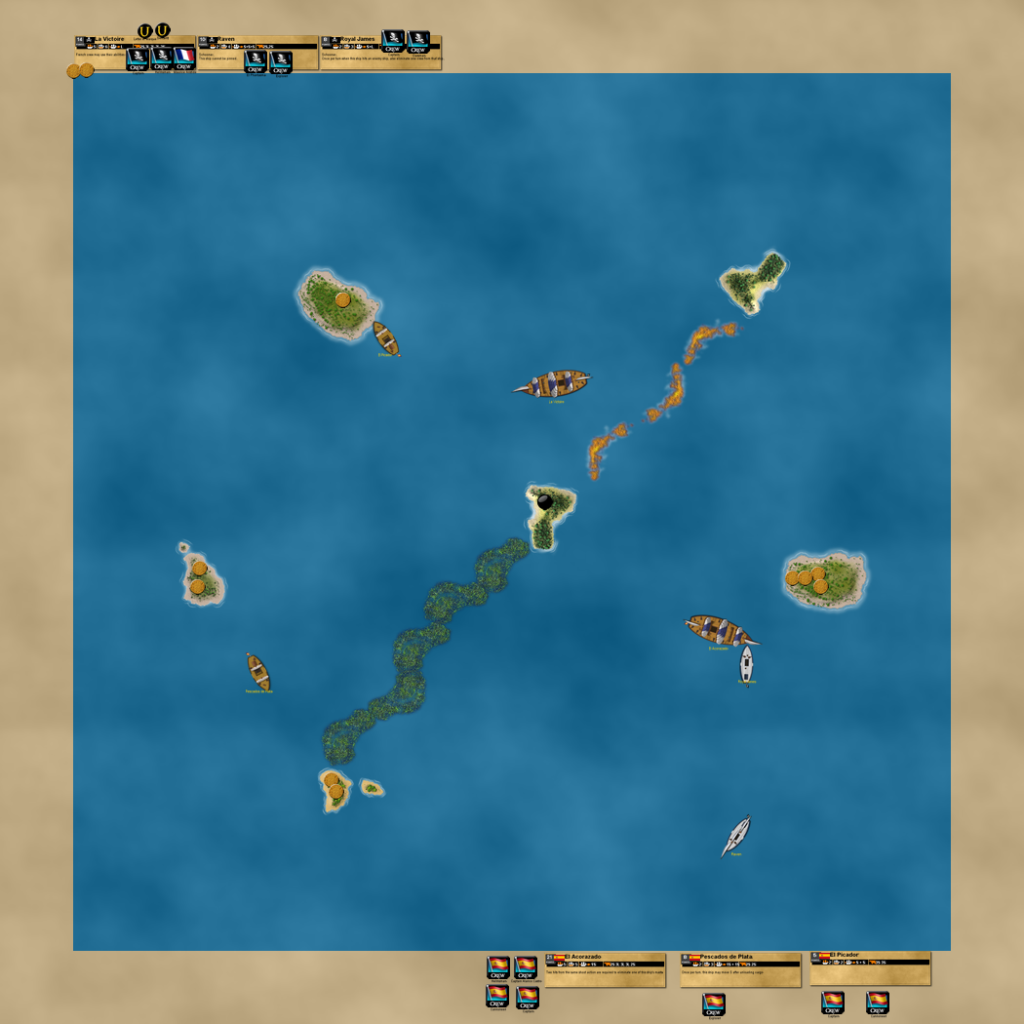 The Royal James and Picador were sunk by the respective flagships!  This left both fleets with 2 ships left. 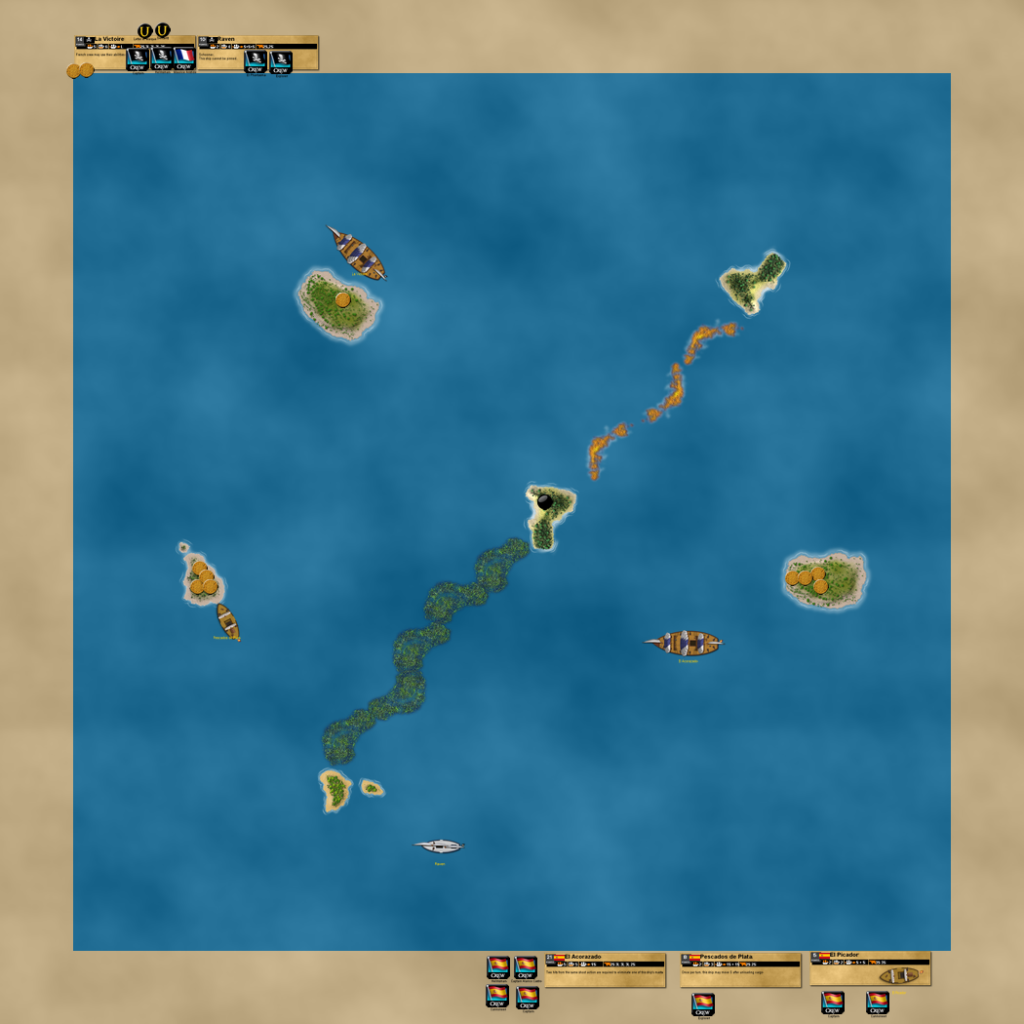 The Raven managed to sneak by the Pescado after a brief scuffle, stealing a 4 coin from the Spanish HI!  The Victoire prepared to run interference if necessary, and she also carried the Letter of Marque UT if there was a chance to repair at the Spanish HI. 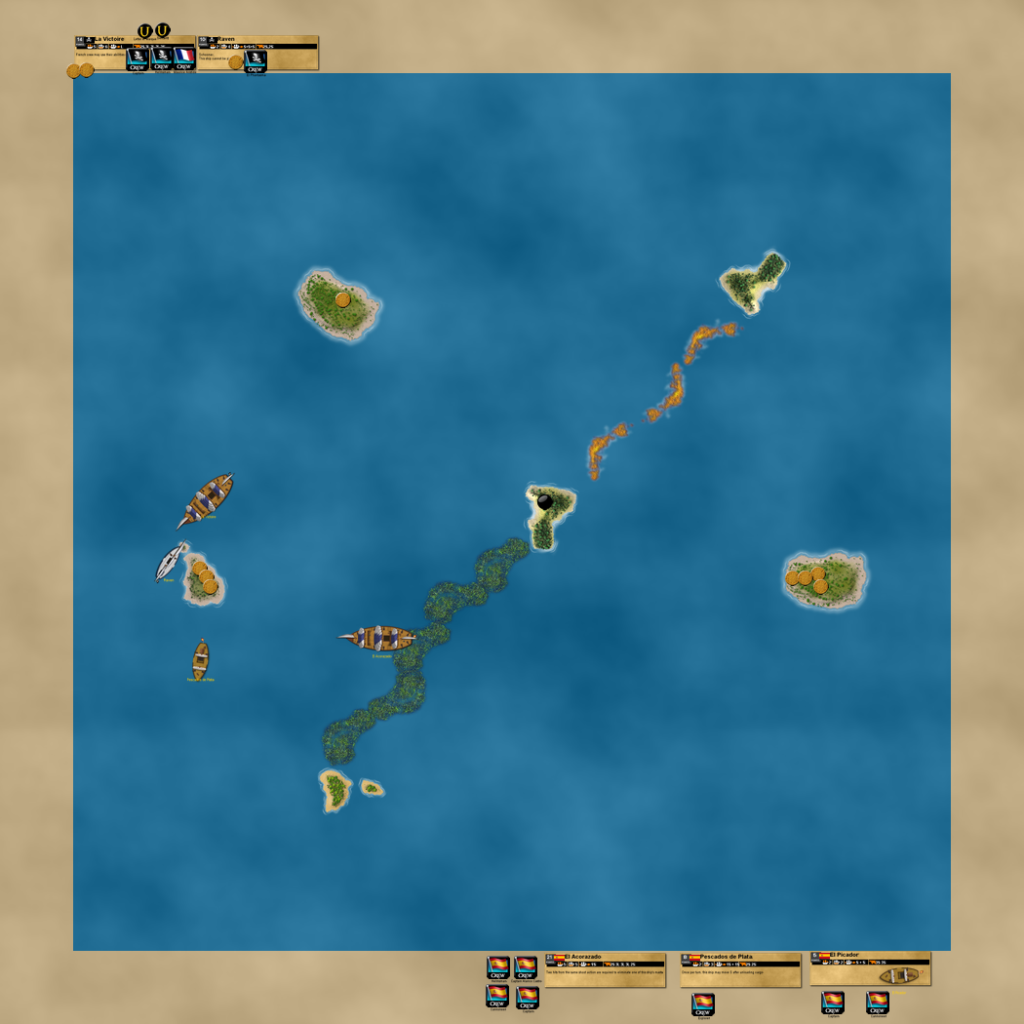 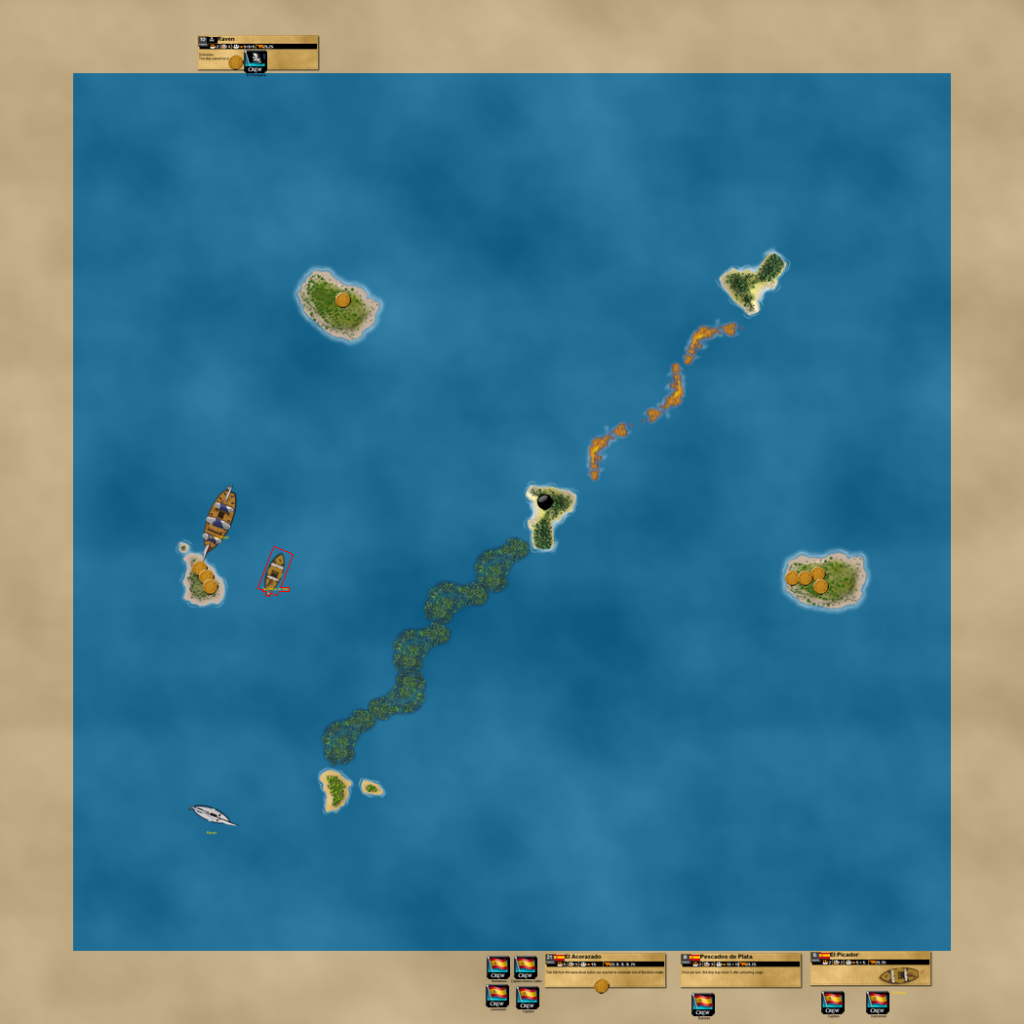 After a closer chase than El Phantasma anticipated, the Raven docked home her stolen loot. 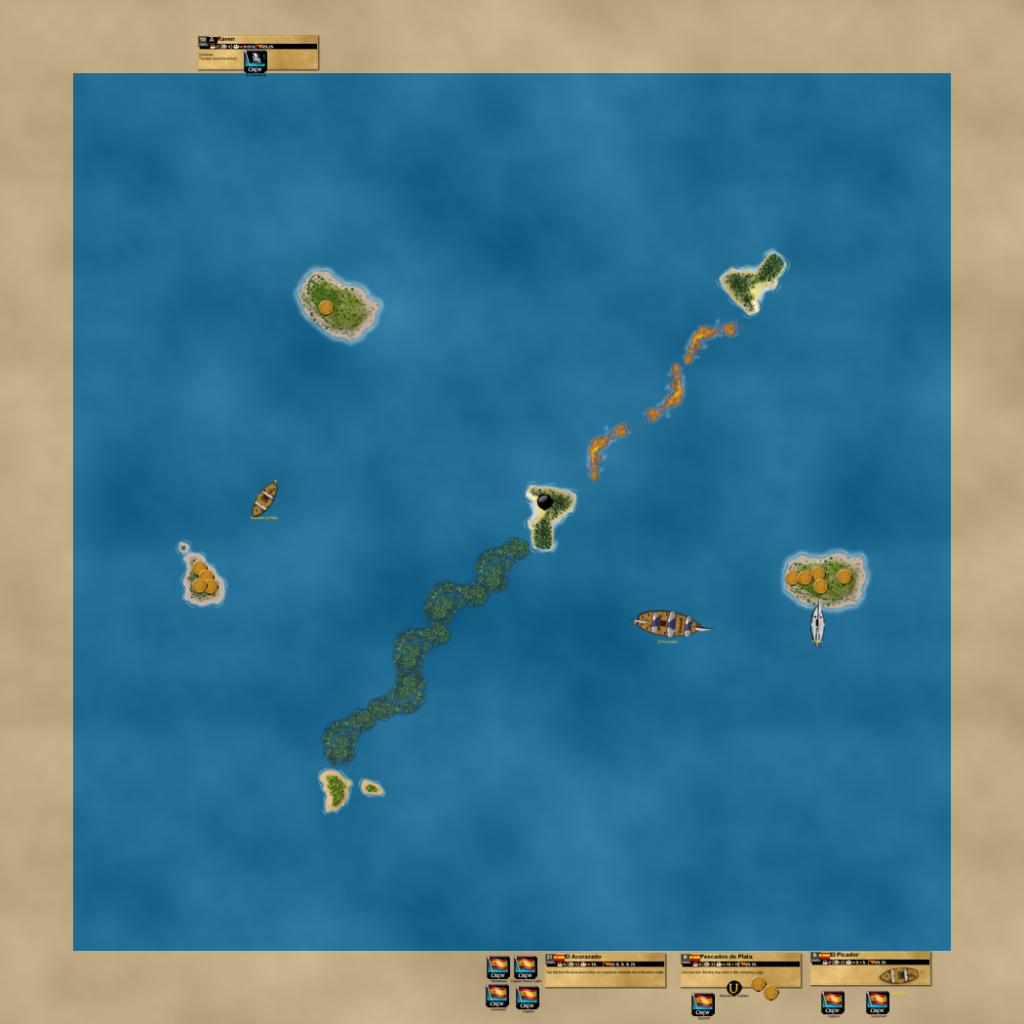 However, the Pescado had time to run off to the northwestern island, bringing back a 6 and 4!  We were running out of time, and concluded that the 3 left in play would be sunk or stolen even if the Raven managed to get it without the Acorazado sinking her first.  The Spanish won a fun game by a 21-19 margin!  This further proves how amazing the Acorazado is, as if we needed more proof.  Even in standard smaller games she can shine as the best gunship in history.  Congratulations to agiantpie for 2 victories in his triumphant return to Pirates! 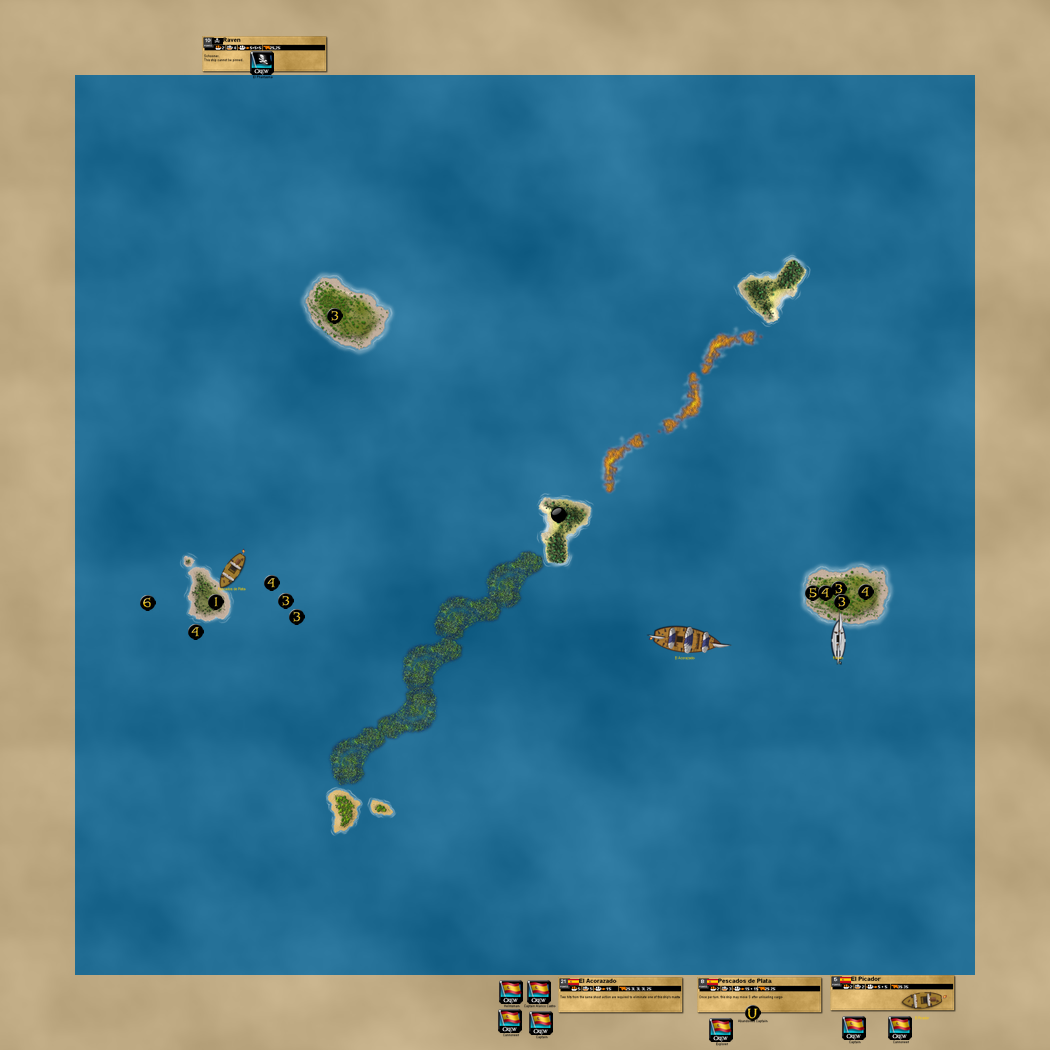 8/2/2019: These were some of the most shocking and unexpected game results I’ve ever had playing Pirates.

Spooked into oblivion  vs.   No One Expects… (commanded by volt)

As I had planned, I kept my fleet together in a tight formation. 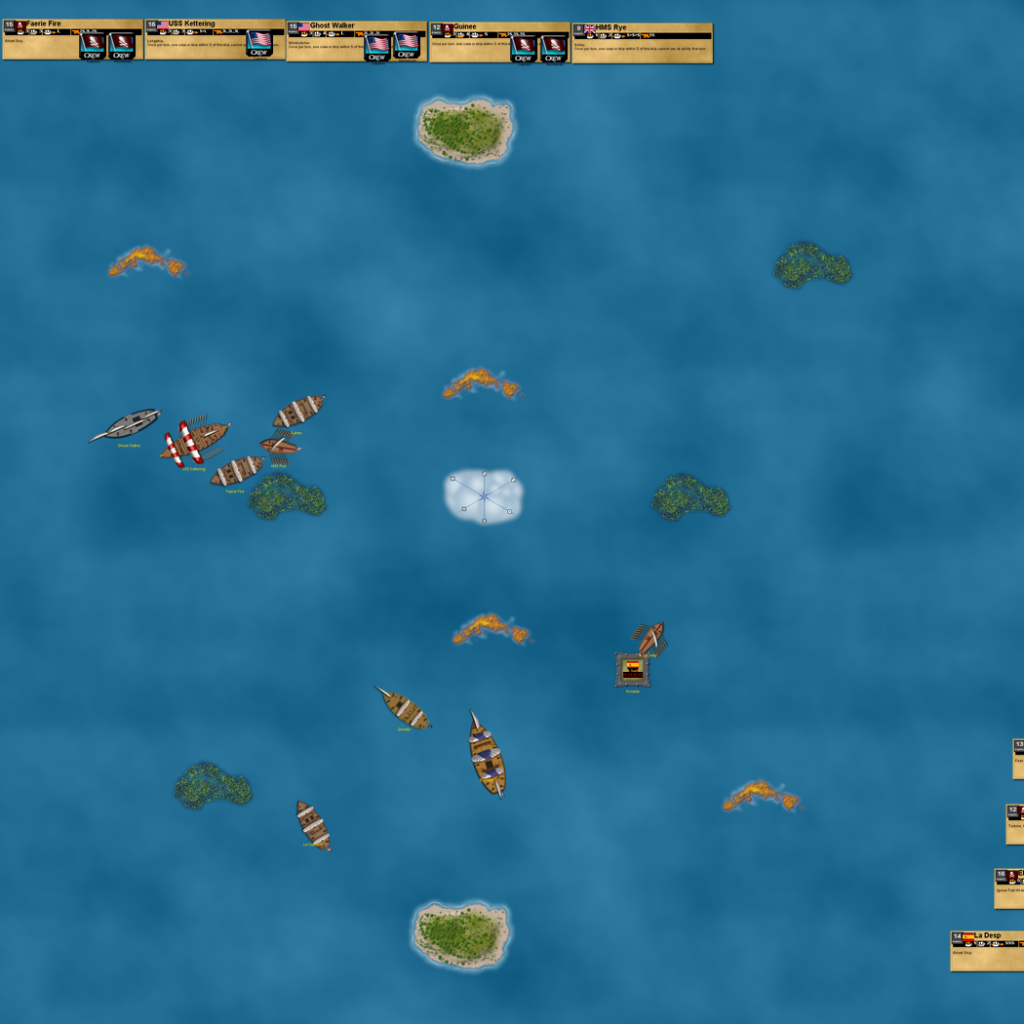 I realized that I didn’t have the setup I wanted, since I wanted the Faerie Fire (the one ship without cancelling) to be in reserve since she had no defense.  The result was some maneuvering that made it look like I was boxing my fleet into a corner lol. 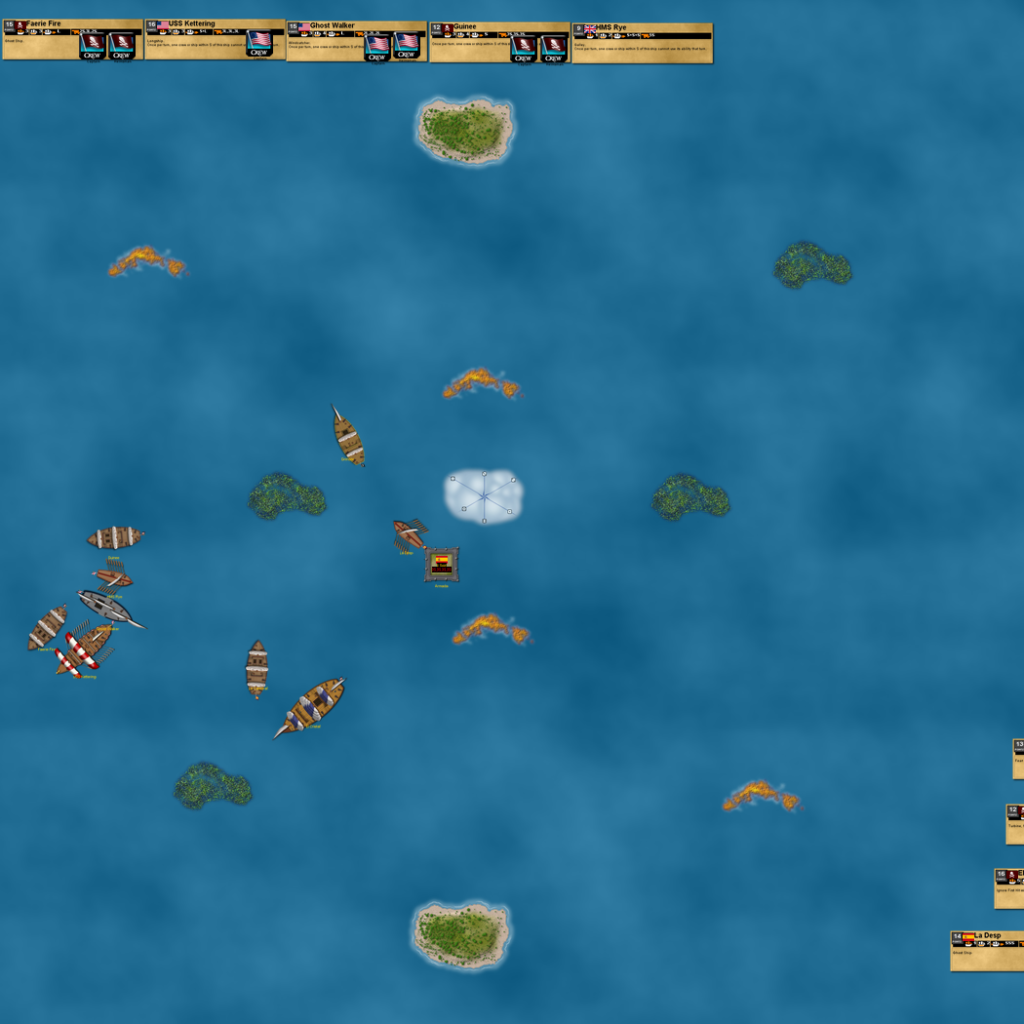 At last battle was joined!  The higher speeds of the cancelling fleet allowed them to get the first shot, and the Kettering and Ghost Walker teamed up to dismast the Cristal.  The Guinee was quickly sank by the Spanish, after Grinder got some hits outside of cancelling range.  The Rye has maneuvered to cancel the flotilla keyword, which meant that Armada couldn’t be towed.

Armada had missed the Rye four times in a row, which allowed the Ghost Walker to sink it. 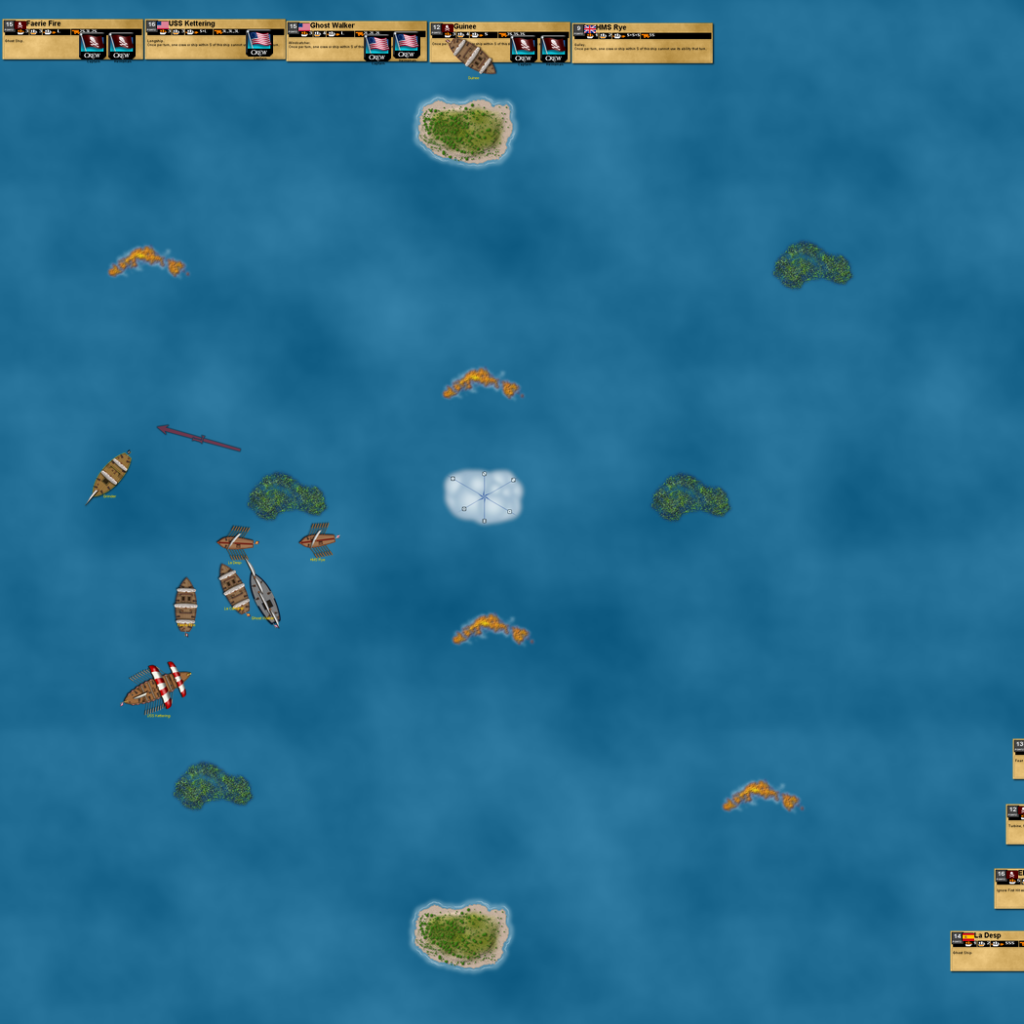 The Faerie Fire and Catedral came to blows, with the Catedral getting the better of the encounter.  However, the Kettering was there to finish off the Spaniard.  The Ghost Walker took out the Desesperanza, and the Faerie Fire damaged the Grinder before the Kettering ended the game on the following turn.

Spooked into oblivion moves on, where it will face the fleets of xerecs and evanglazier in the finals.

Spooked into oblivion vs. Spooks of the Sea! 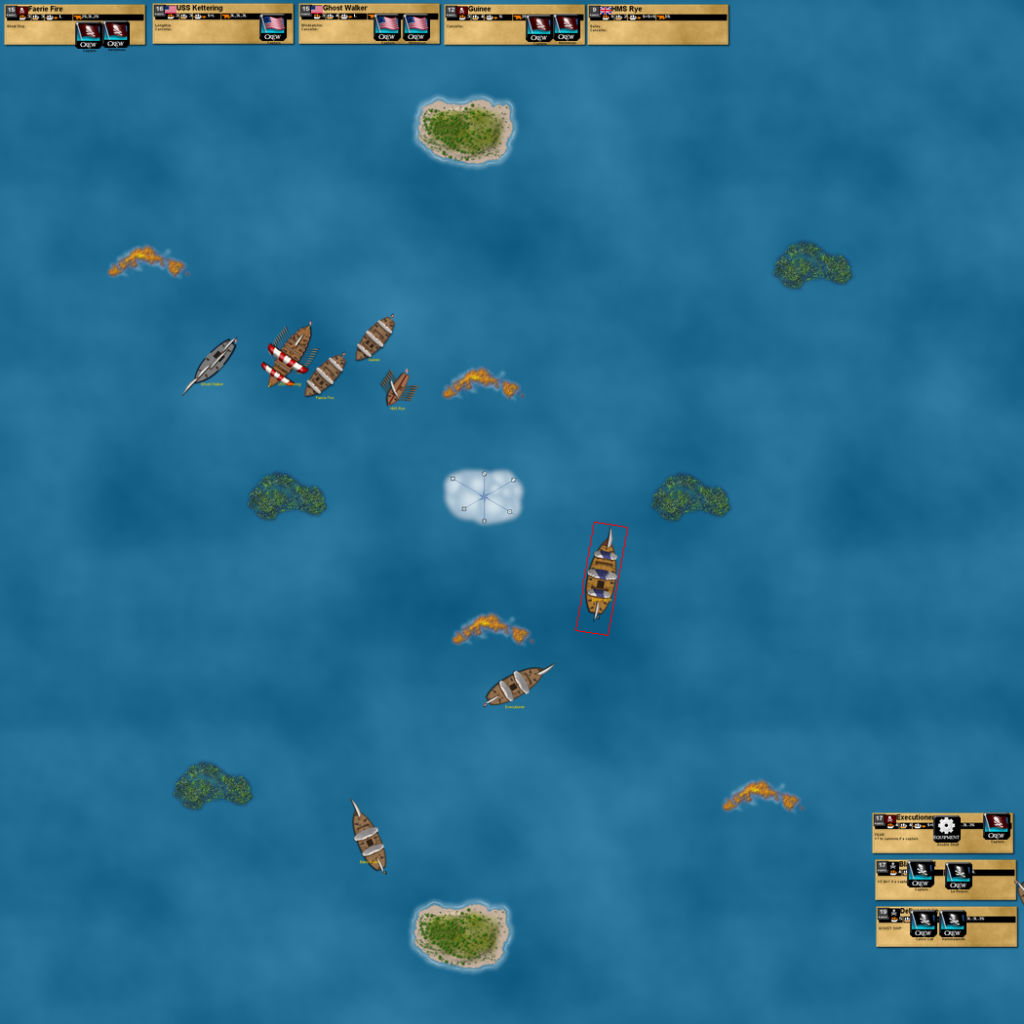 We maneuvered for a while: 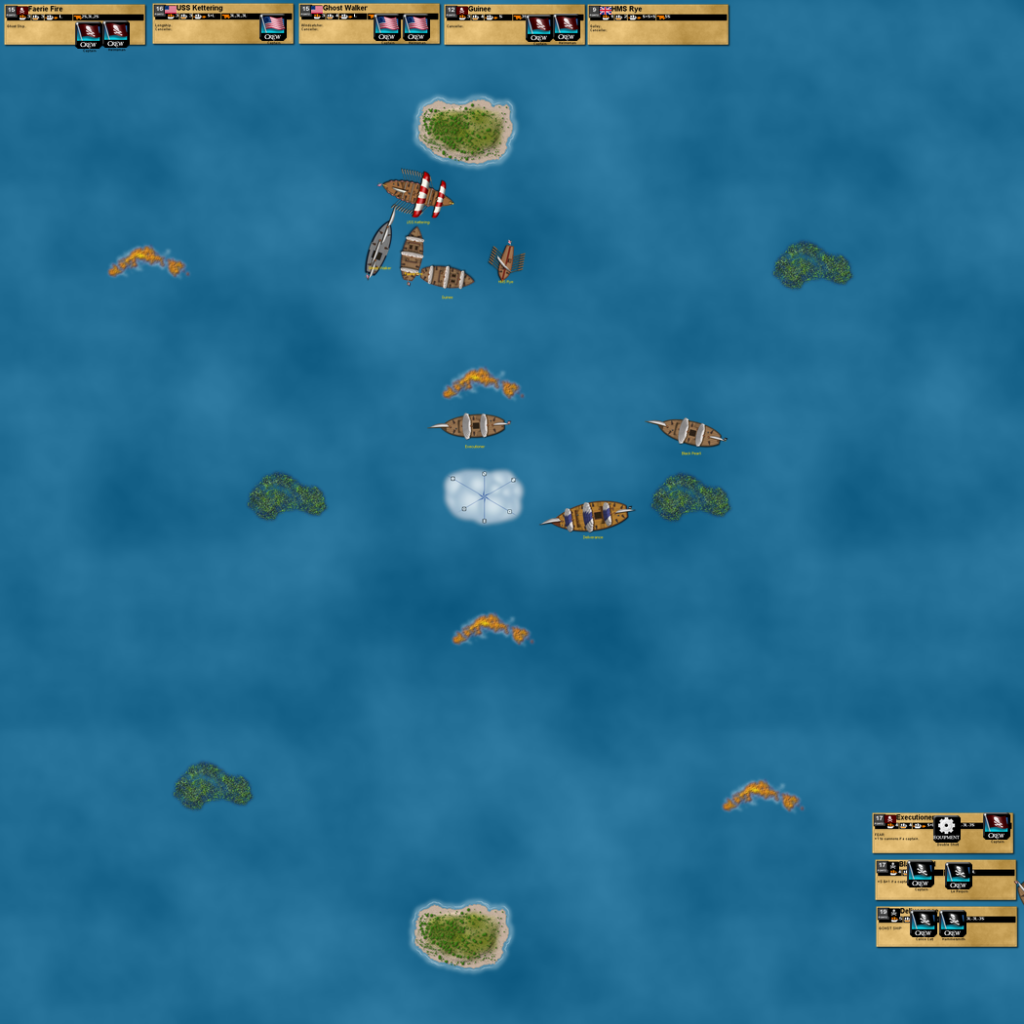 The Guinee and Ghost Walker (GW) started combat, blasting a mast off the Executioner. 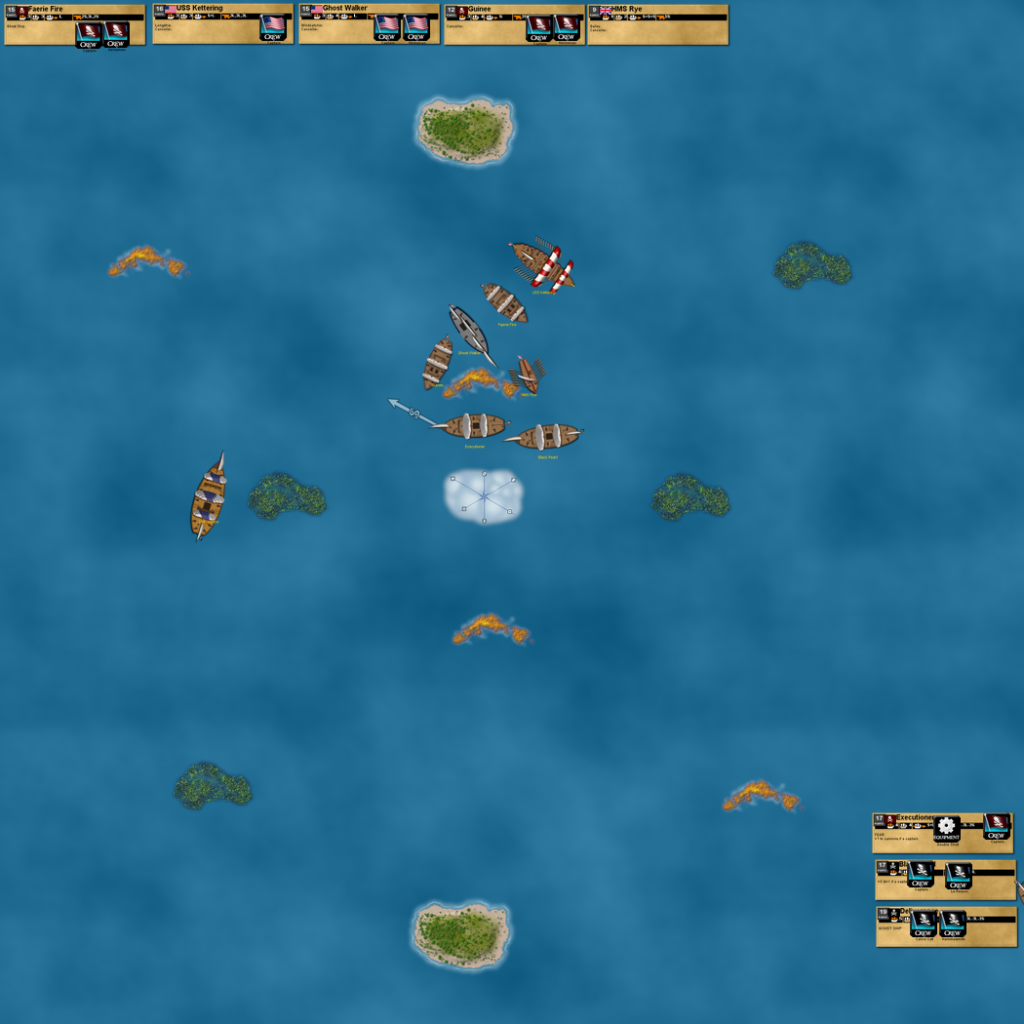 Here’s the cancelling and chaos in full swing.  The GW and Guinee have been dismasted by the Executioner and Deliverance, while the Black Pearl escapes doom at the hands of the Kettering and Faerie Fire. 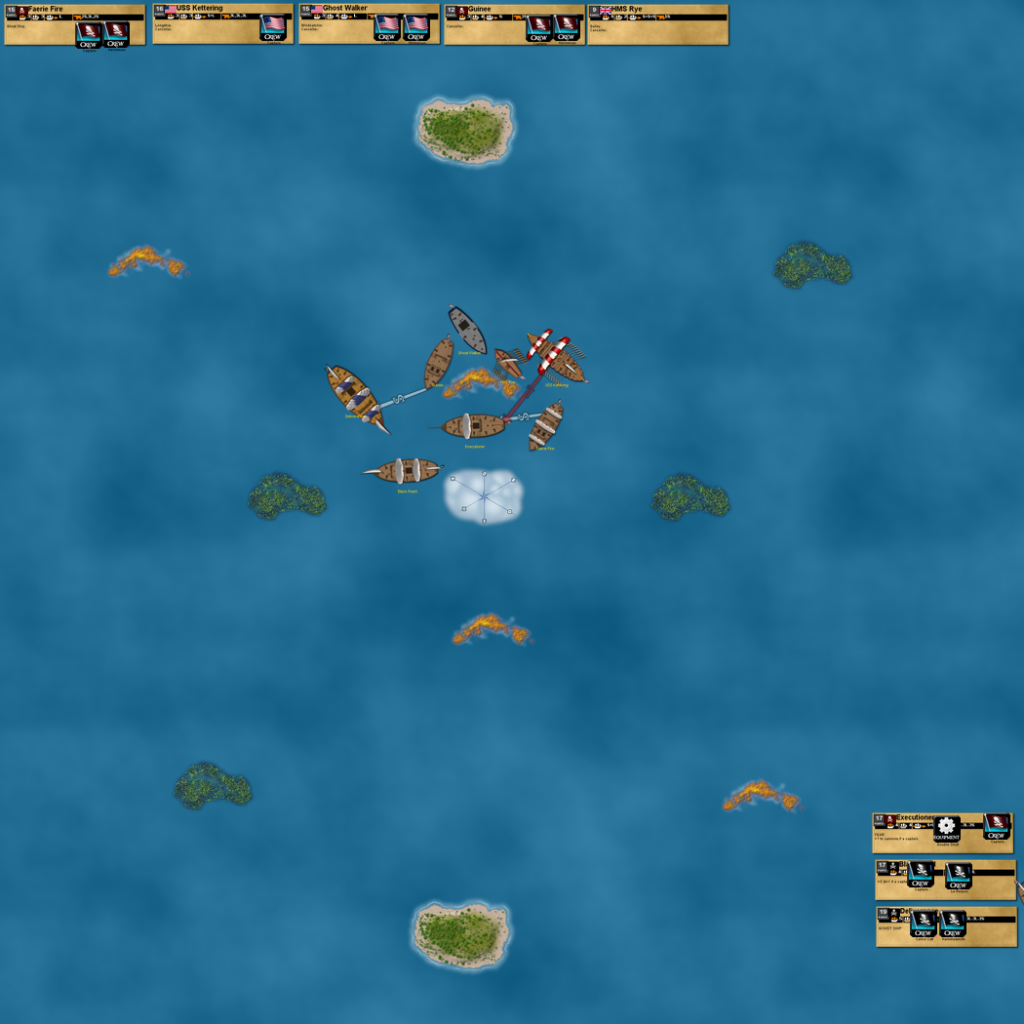 The Executioner is sunk, but my fleet is down to 5 masts against 9 for Xerecs’ fleet. 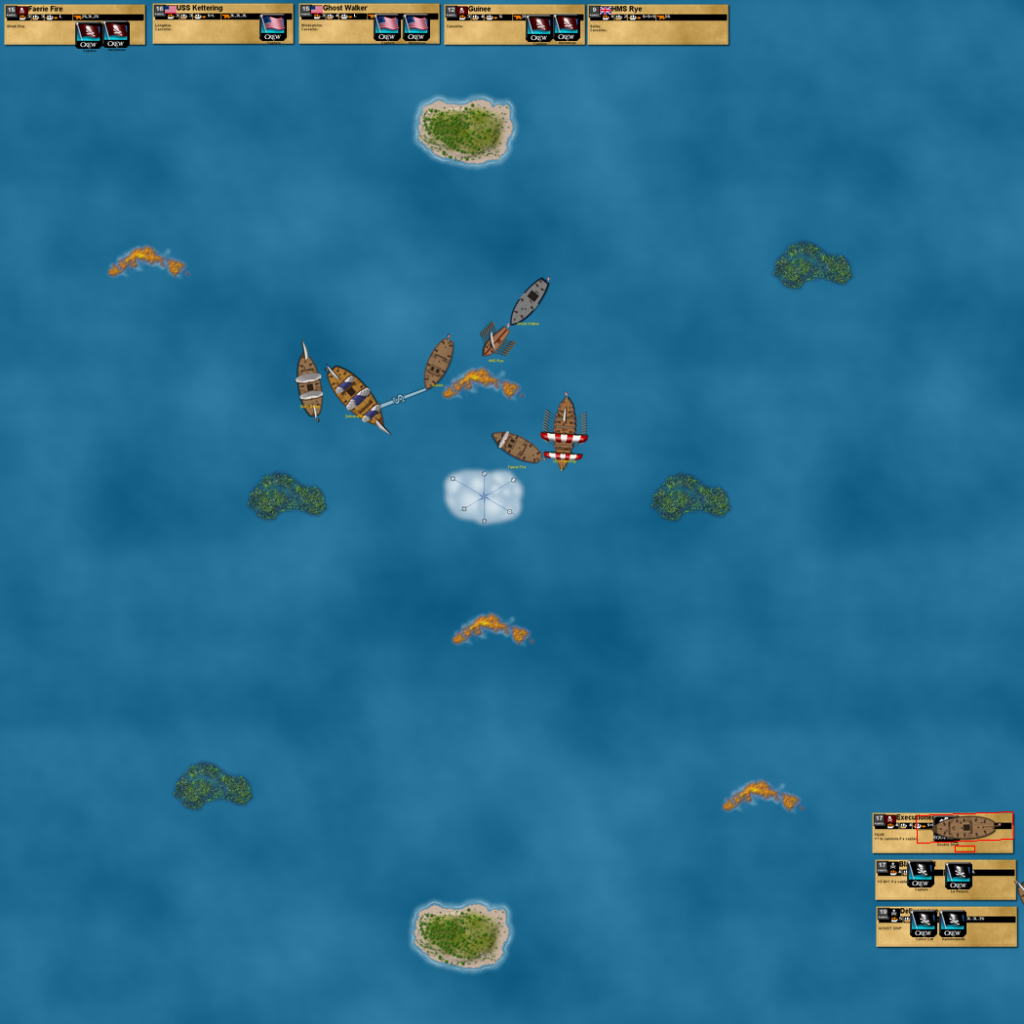 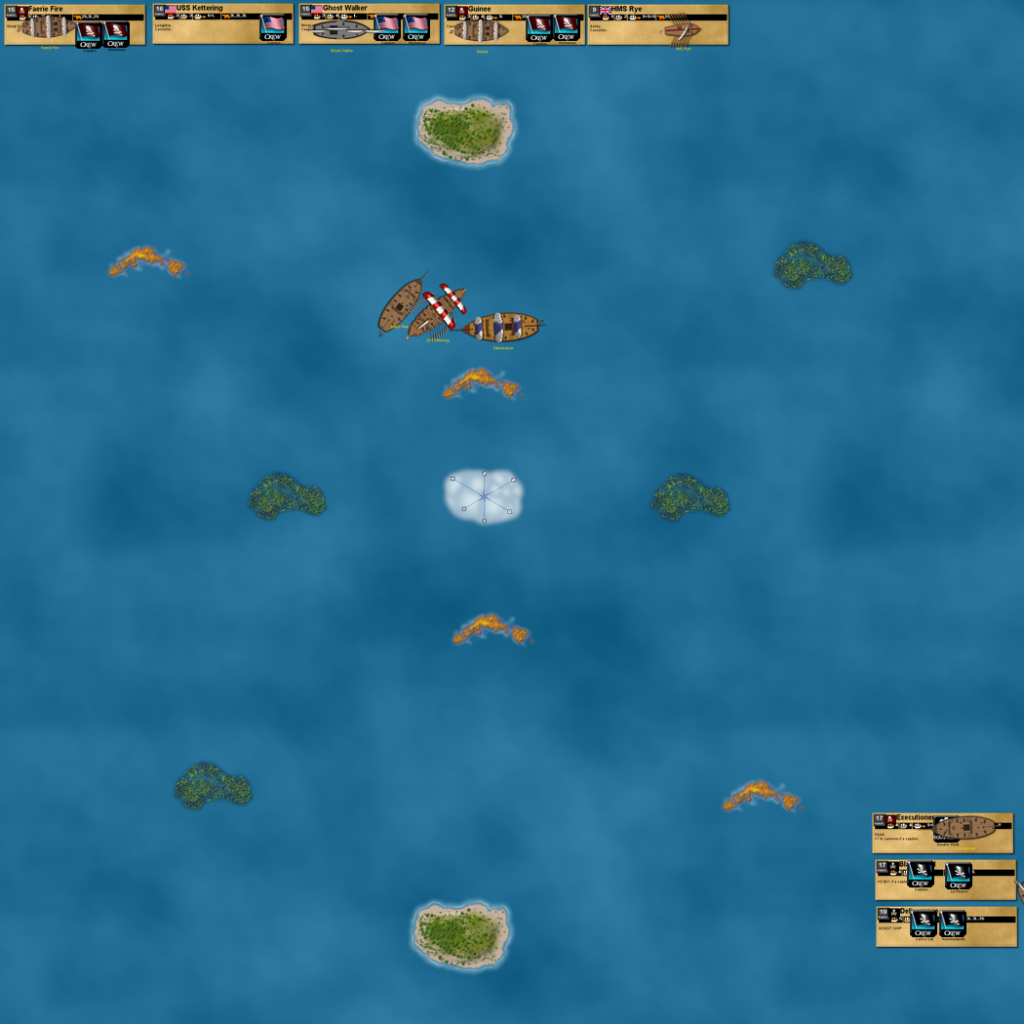 The Deliverance rammed and shot to take out a mast, but the Kettering won the battle.  In the end, the Kettering was left afloat with one mast for a very narrow victory!

Spooked into oblivion vs. Spooky McSpookface Challenge (commanded by Xerecs)

My fleet was more aggressive in this one, and the Kettering managed to dismast the Loki’s Revenge at the start of combat. 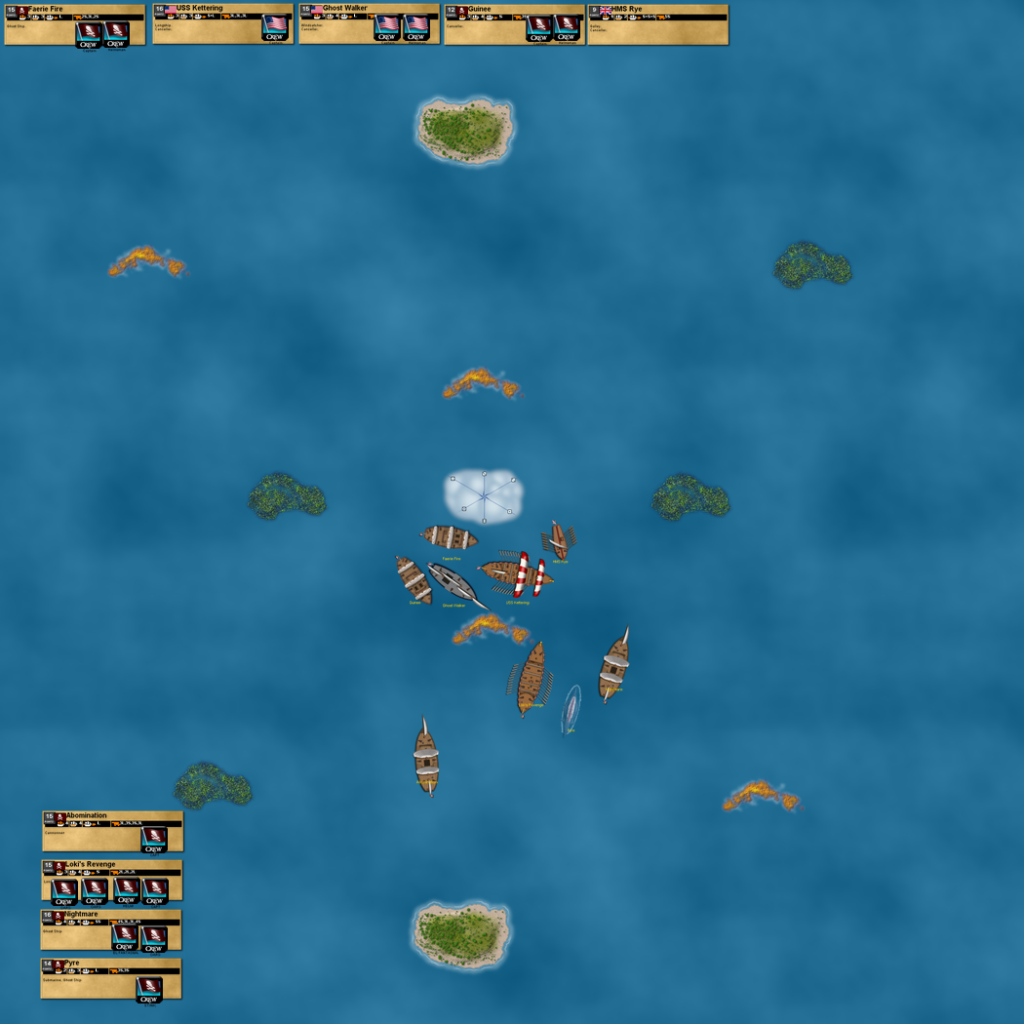 The Kettering and Abomination were soon crippled, leaving my fleet with a firepower advantage. 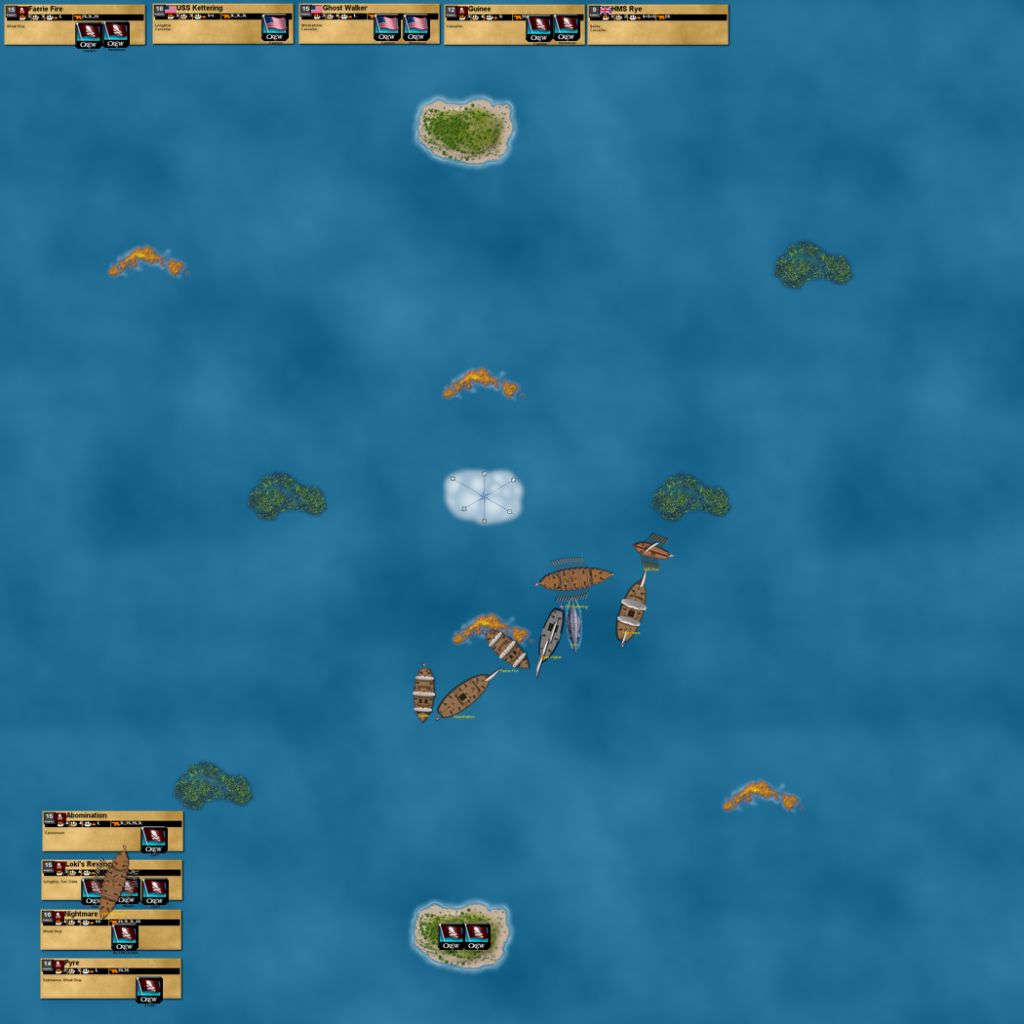 After I sank the Pyre and Abomination, my rolls started to go south, and the Nightmare went on a nice run of hits! 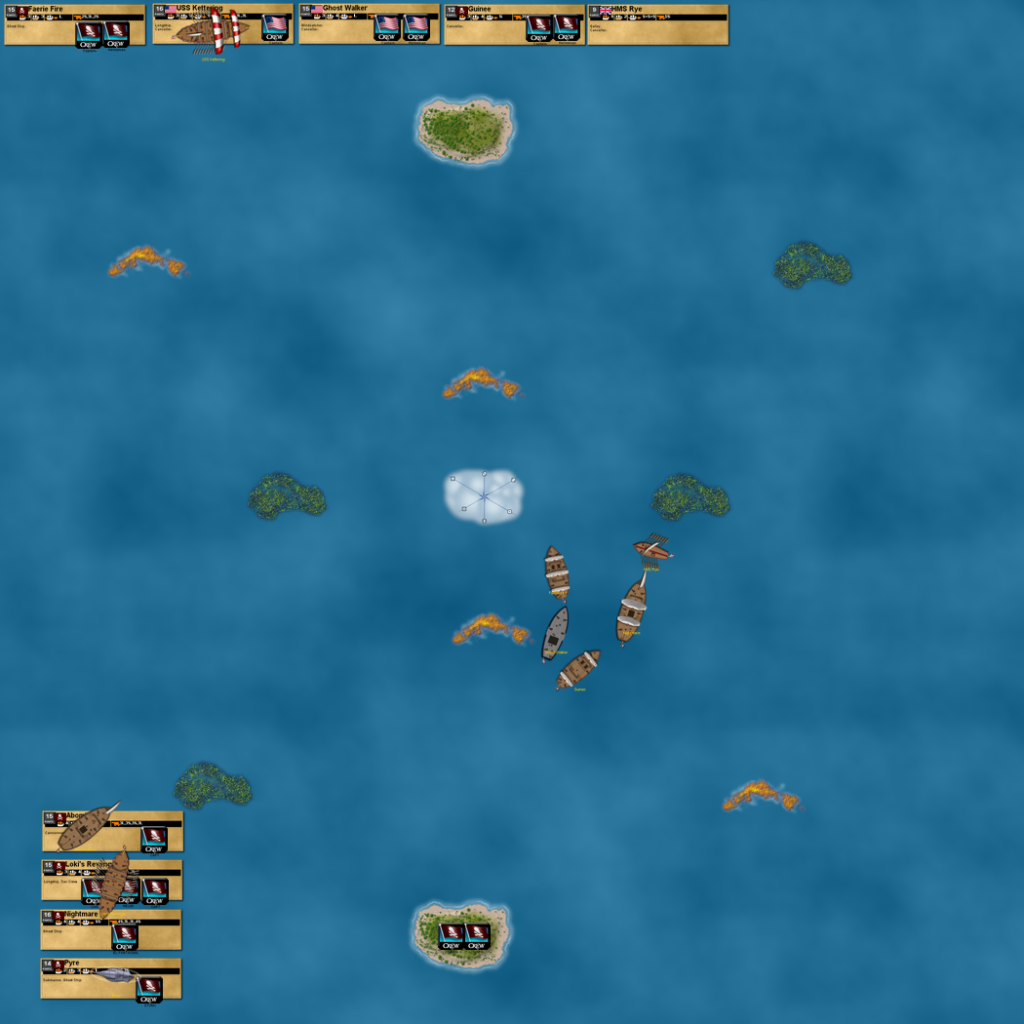 I nearly lost and decided to retreat.  Scuttle attempts on the GW and Guinee failed, allowing the Nightmare to capture both.  Xerecs made a nice move and grabbed the Guinee’s captain and helmsman since the Nightmare’s captain had fallen in battle.  Then the Nightmare towed home the GW to repair.  The Faerie Fire would repair at my HI, but the Rye was essentially useless once the GW started sailing again. 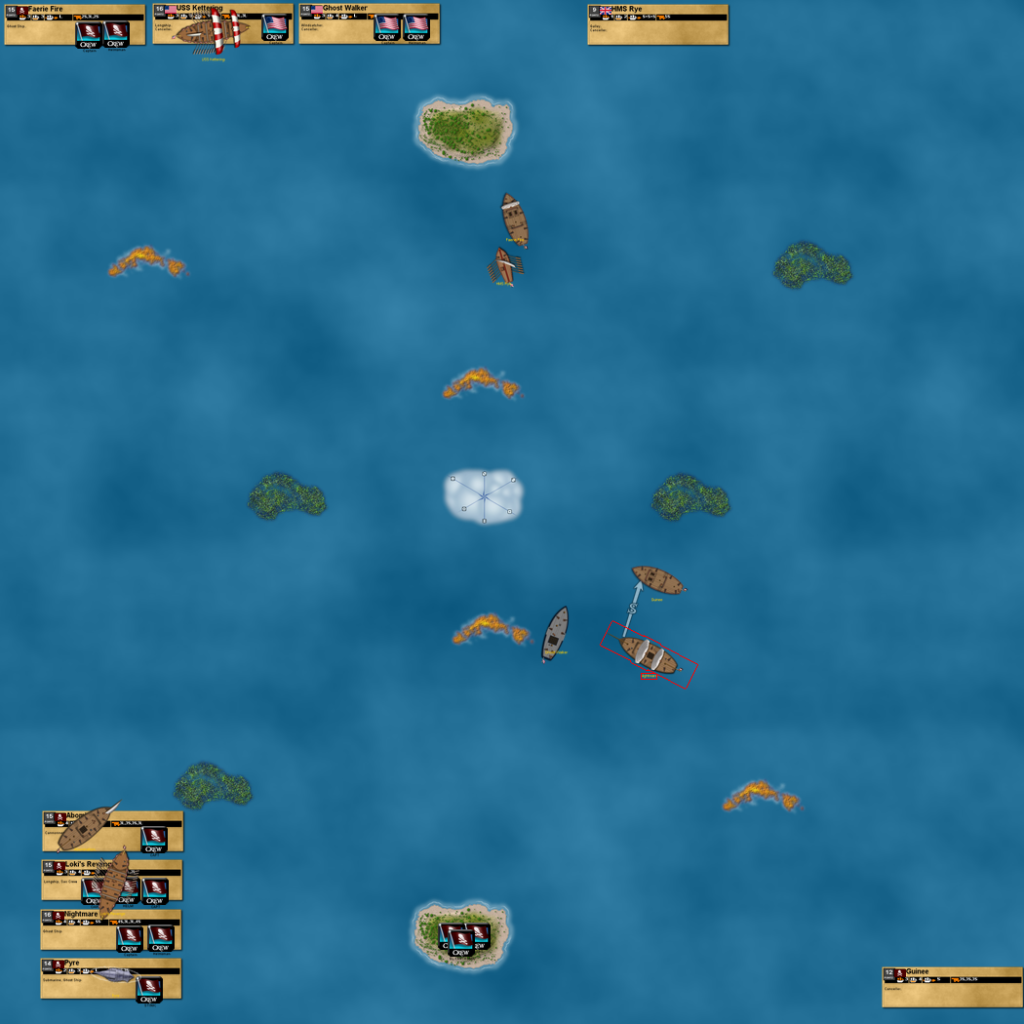 The Cursed had gained the firepower advantage and went on to win the game! 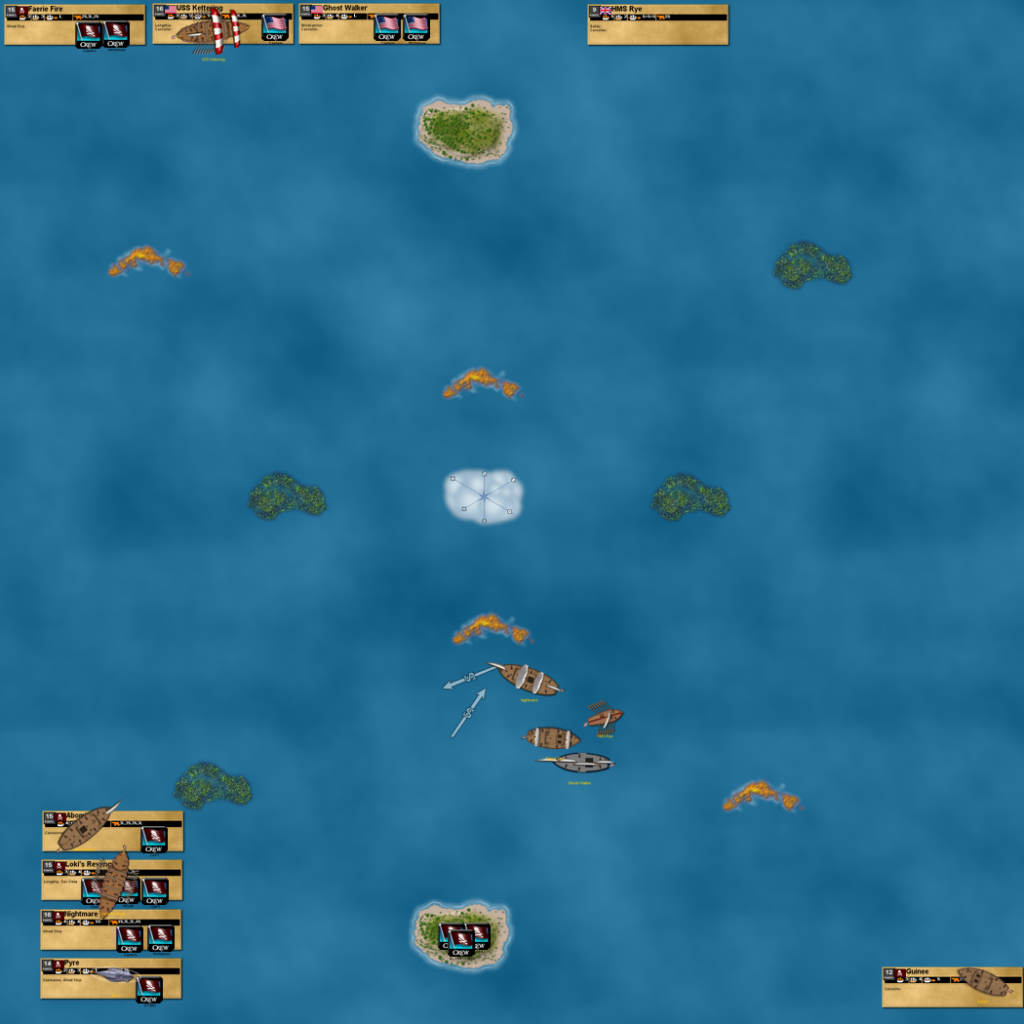 These games were unique since both featured come-from-behind victories.  My fleet was down 9 to 5 in masts but managed to win.  Selvaxri’s fleet lost its best ship (the Loki’s Revenge) before she could fire a shot, but managed to pull out a nice win.  Another game will be played; if selvaxri wins, he wins the fleet challenge.  If Xerecs wins, volt will likely decide the winner.

Spooks of the Sea! vs. Spooky McSpookface Challenge (commanded by a7xfanben)

The fleets move out, with Xerecs having a vast speed advantage. 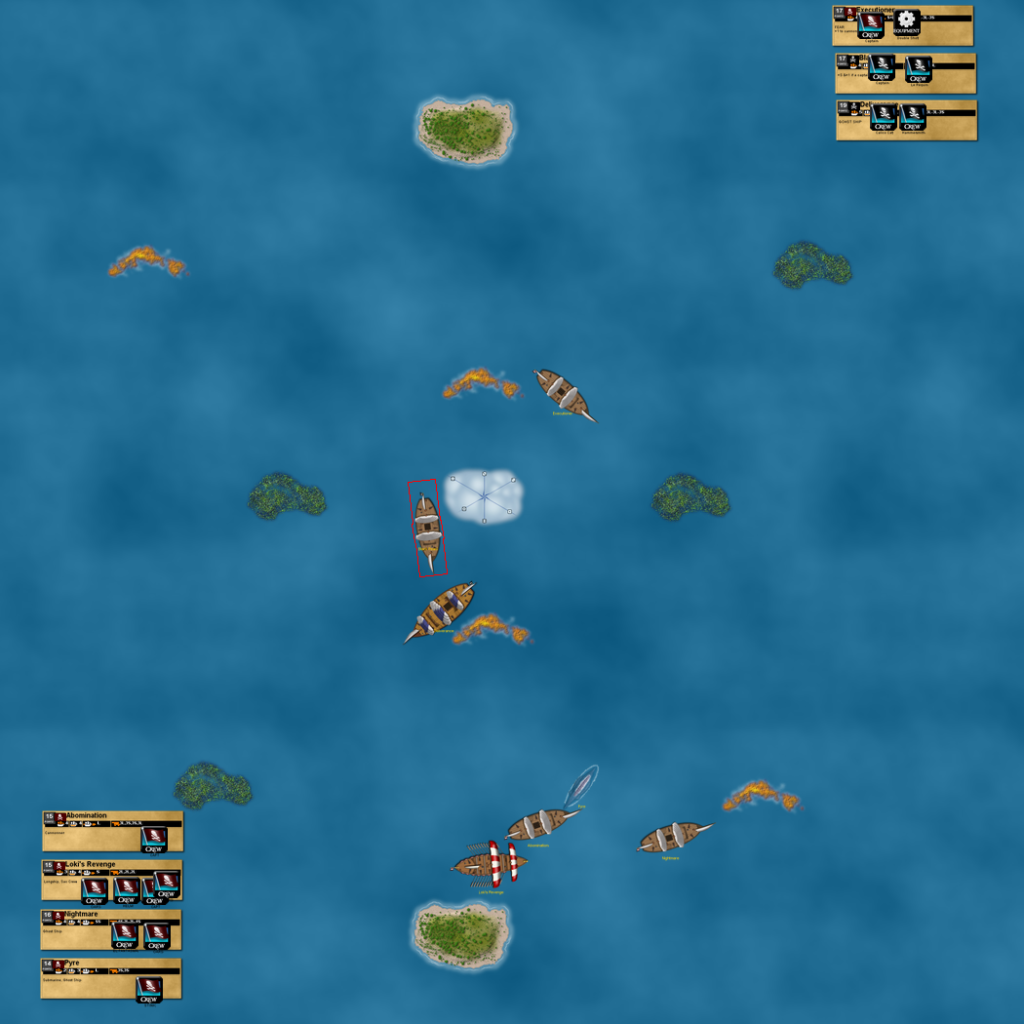 Battle is joined, with the Executioner taking out two masts on the Abomination.  The Abomination and Pyre purposely were maneuvering to try and protect the Loki’s Revenge and Nightmare. 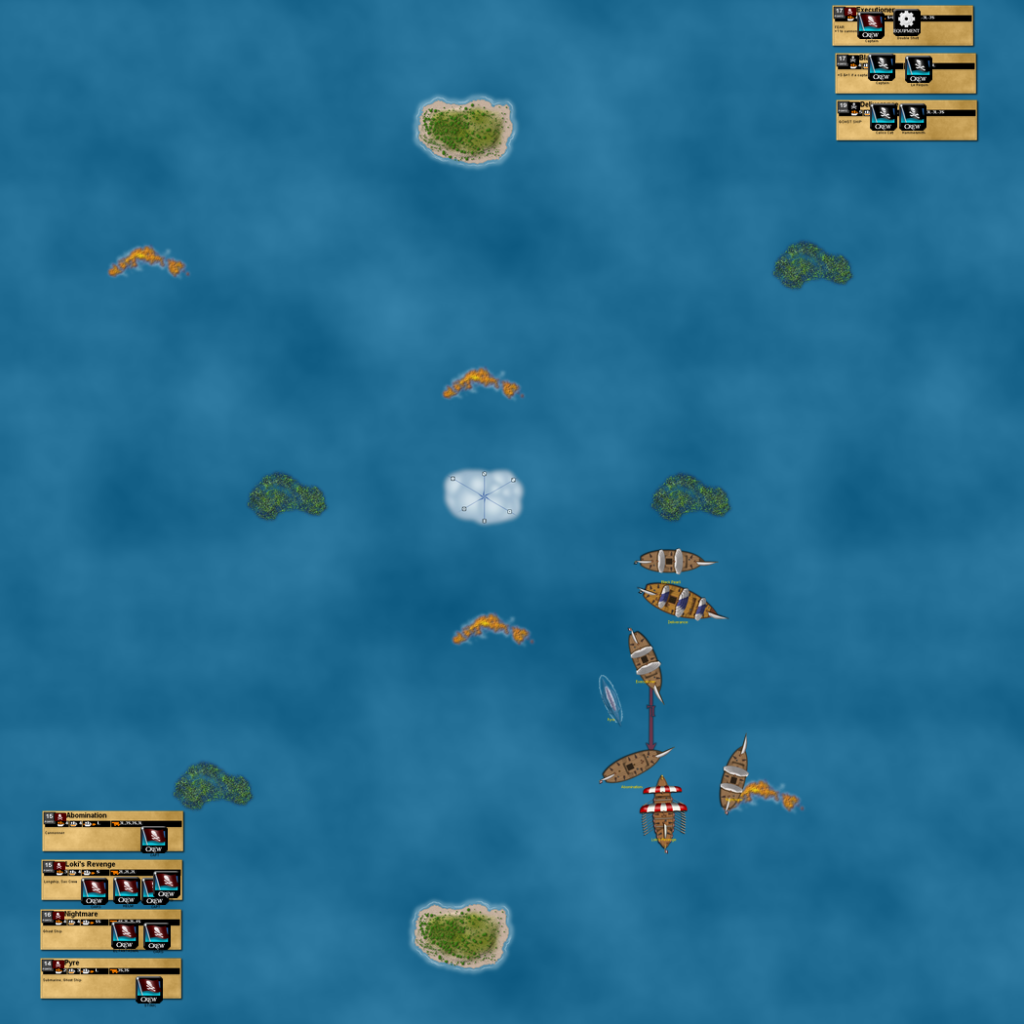 That turn put the Loki’s Revenge in perfect position for a double attack.  Saccing an oarsman, she sunk the Executioner and Deliverance with help from the Pyre and Abomination!  The Nightmare then started chipping away at the Black Pearl, who put up a good fight.  In the end, the firepower disparity was too much, and the Cursed defeated the Pirates!  Selvaxri has won the fleet challenge! 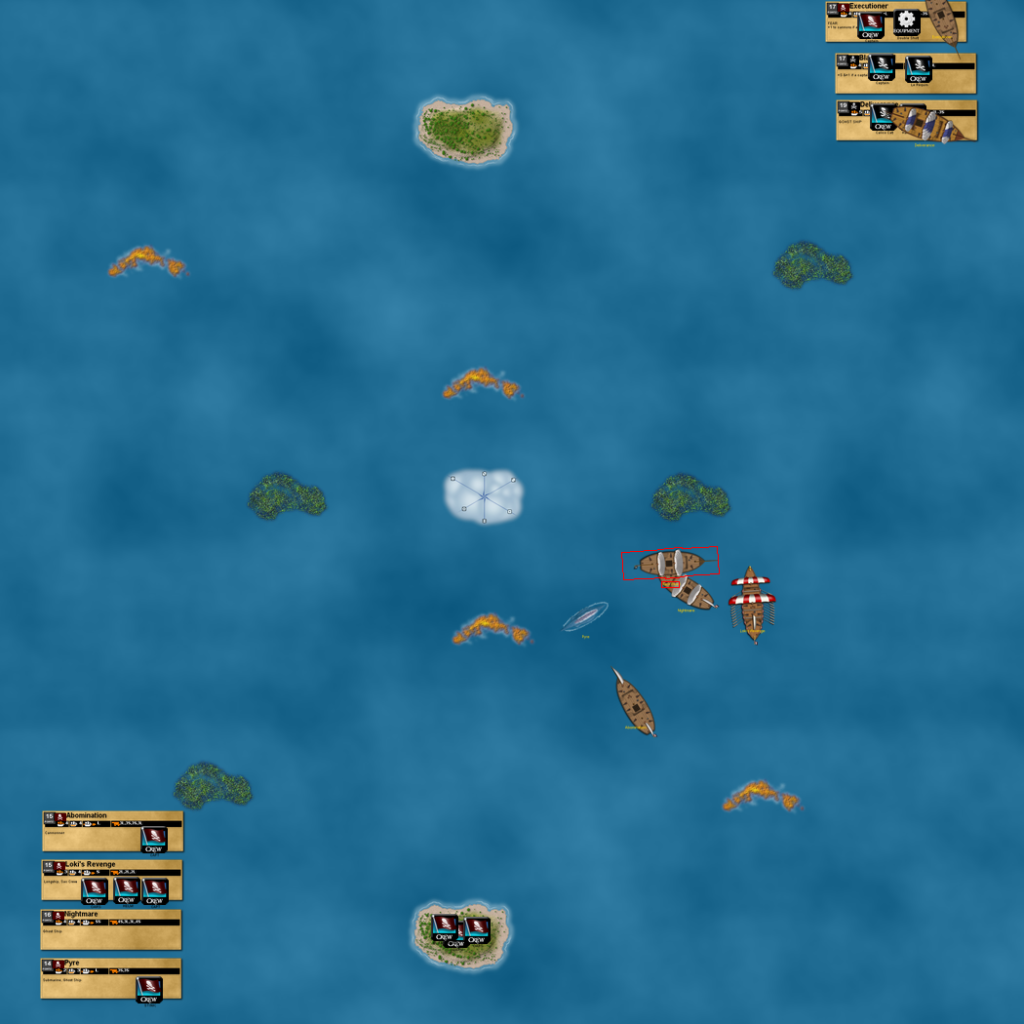